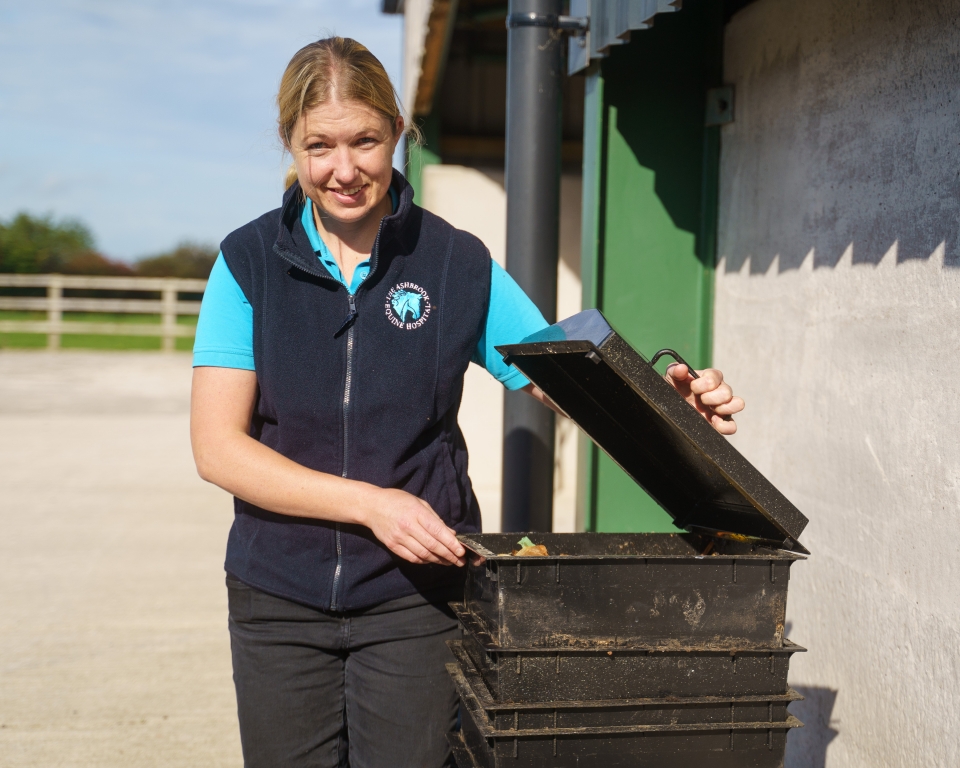 Worms Helping A Cheshire Veterinary Practice To Have A Greener Future

THEY’RE wiggly, found in gardens and will eat almost anything - and now worms are helping a Cheshire veterinary hospital become environmentally friendly.

Ashbrook Equine Hospital, which is more accustomed to treating horses and ponies, has installed a wormery at its practice in Allostock, near Middlewich.

Leftover sandwiches, apple cores, teabags and even wooden spoons, which would otherwise be destined for landfill, provide a feast for the worms who turn the food waste into a nutrient-rich compost, which is great for gardens.

The wormery was installed in a barn 12 months ago by equine vet Julia Shrubb, who uses the compost to grow vegetables in her garden at home.

The worms are tiger worms, which are the best worms you can use in a wormery for worm composting.

Julia said: “I was concerned that our food waste was going to landfill, where it emits harmful greenhouse gases like methane as it breaks down, and was disappointed that food waste collection was not offered by our waste disposal company.

“These tiger worms have been munching through all our foodwaste, banana skins, apple cores, tea bags and even wooden spoons, turning it into amazing vermicompost, which is also known as worm poo, in just three to four months.

“The worms are very low maintenance and have been happily breeding. The compost and liquid fertiliser is incredibly nutrient dense and great for the garden. I grow lots of vegetables at home and they are thriving because of the compost.”

Ashbrook Equine Hospital is part of VetPartners, a veterinary group with 160 practices across the UK, which earlier this year unveiled its sustainability strategy, committing itself and practices to a range of goals that put sustainability at the heart of everything the company does.

Ashbrooke Equine Hospital has also introduced a range of other recycling initiatives, including TerraCycle boxes, where hard-to-recycle waste, including PPE, can be disposed of in the boxes as long as they are not contaminated with clinical waste. Once full, the boxes, which are themselves recyclable, are collected by TerraCycle and separated into individual components for recycling.

Julia added: “We have more than halved our general waste, which I calculated as more than 50,000 litres a year diverted away from landfill or incineration.

“We now have a big wheelie recycling bin for card, paper, many types of plastic and tins/cans. I was pleasantly surprised to discover that it is about half the price to have a recycling bin emptied compared to general waste bin, so it not only makes sense environmentally but also financially.

“We also recycle stretchy plastic and bags, such as the shavings bags wrapping, which as an equine hospital, we have a lot to dispose of. Everyone in the team has got behind the recycling and makes an effort to use the correct bin. A colleague in the office, Sandra Bowles, also collects and recycles tablet blister packs,  batteries and foil.”

VetPartners Sustainability Strategy: Looking Forward Together, has been rolled out across its 500 UK sites and can be viewed here: https://vetpartners.co.uk/app/uploads/2021/02/VetPartners-Sustainability-Strategy.pdf