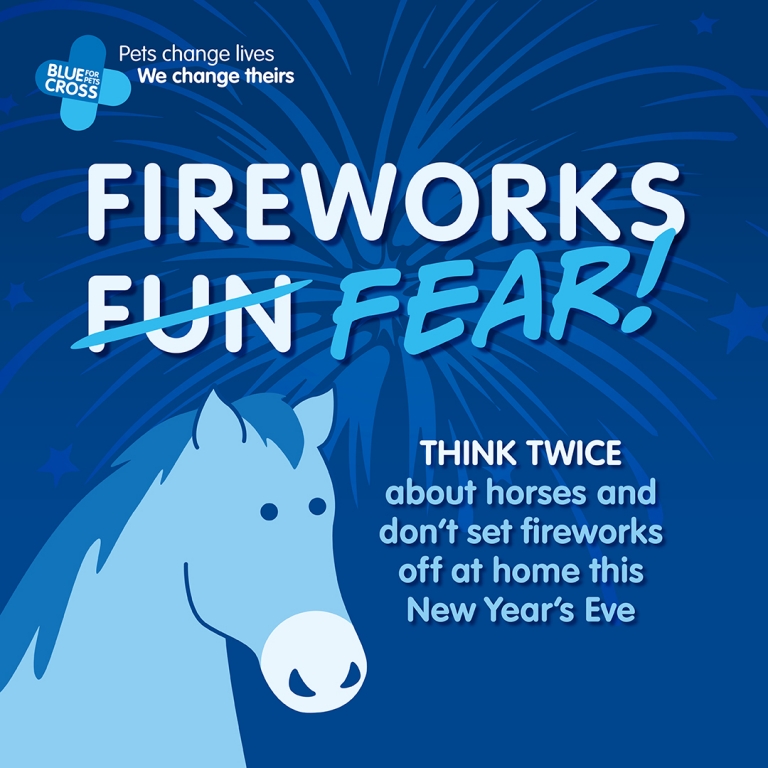 Blue Cross is urging people not to let off any fireworks this New Year’s Eve, as horse owners lay bare the extent of suffering loud bangs causes our equine friends.

As a difficult year for everyone come to a close, it is understandable the British public will be wanting to celebrate new hope for 2021 this winter and, for some, that might include letting off fireworks in their garden, or private fields.

However, the animal charity asking people to think about horses and pets this New Year’s Eve and resist the temptation to use loud fireworks, which we know terrifies many of the animals we share our lives with.

Blue Cross surveyed horse owners in early December and found that there were high levels of concern in the equine community about the impact on their horses and the difficulty in predicting when the fireworks may be let off in order to try and plan ahead. (1)

73% did prepare their horses for fireworks, with 51% formulating a plan with the Yard. Preparation included putting them into a stable early, playing music and distracting with food. Some owners also used prescribed medication and herbal remedies.

However, a shocking 35% reported accidents as a direct result, with several detailing the result being PTS. (2)

The charity also polled pet owners to see the affect on our four-legged friends inside the home. (3)

“These results have laid bare the extent of suffering so many of the nation’s horses go through for days and weeks at a time every single year.

“That’s why we are pleading with people to think about their own actions this New Year’s Eve and consider ditching setting off loud fireworks, which leave many horses literally shaking in fear, for other celebrations.

“We know at Blue Cross just how upsetting this time of year can be for animals – especially now we are seeing more and more people doing their own fireworks in their back gardens and private fields. Let’s all do our bit to help make this fear a thing of the past.”

Blue Cross is also calling for the public to spread the word and display posters in their windows or local community boards, encouraging people not to use fireworks this winter.

These can be found and printed off from bluecross.org.uk/nye-fireworks

Advice for how to help prepare your horse for fireworks season can be found on Blue Cross’s website here.

(2)   Examples of accidents reported in the survey