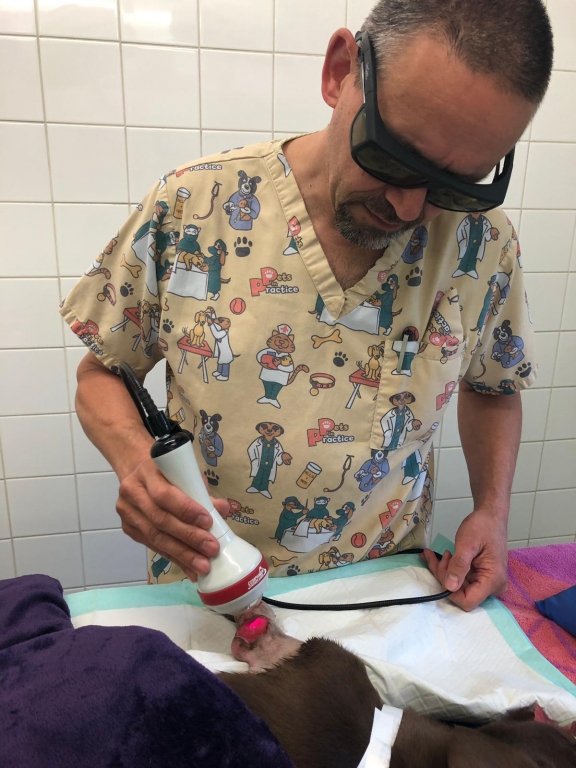 A Labrador puppy with life-threatening wounds on his front leg has been saved thanks to an innovative combination of laser treatment and Manuka Honey dressings.

Ms Hobbs bought Cooper from a breeder at the end of May. She was told that he had a ‘small cut’ on his left foreleg but that it was nothing to worry about.  A few days later, he started limping and became lethargic. The next day two wounds burst open on his leg.  They were partially covered by areas of black, hardened skin, indicating a condition called ‘necrosis,’ in which the skin dies.

Laura Hobbs rushed Cooper to Medivet Faygate where the veterinary team cleaned and his wounds and removed damaged tissue before, to her surprise, applying a dressing containing Manuka Honey. They explained that this type of honey is widely recognised for its antiviral, anti-inflammatory and antioxidant qualities.

Given the severity of Cooper’s wounds, the veterinary team then rebandaged his leg regularly with the Manuka Honey dressings for the next two weeks. Lead vet Dr Pete van Dongen also treated them with a laser to reduce pain, promote healing and reduce the risk of infection. Eventually, the wounds were surgically cleaned and then closed, using stitches and further bandages. Two weeks later, Cooper had his stitches removed and he is now fully recovered and living a happy life with his family.

“The wounds were so serious that, at first, we were scared that he might lose his leg,” said Laura Hobbs.  “When the Vet told me that they planned to treat them with honey, I was surprised but watching them improve day by day was simply amazing. I worked at home during his treatment so that I could care for him and, as a result, we’ve formed a very strong bond. Seeing him start to enjoy being a puppy again and play with his yellow Labrador ‘brother’ Herbie is just wonderful. We are all very grateful to Pete and the team at Medivet Faygate.

“Cooper’s story has a happy ending but I’d like to remind anyone looking for a puppy to research breeders thoroughly and make sure you find a reputable one. Cooper was being kept in poor conditions and had not been taken to the vet when the wound first appeared. His story could have had a very different ending.”

Dr Pete van Dongen said: “Cooper’s case show that with a combination of old-fashioned and modern veterinary techniques, a dedicated owner and an enthusiastic veterinary team, anything is achievable. It helped that Cooper was such an adorable puppy.”

Medivet is a veterinary led group of almost 300 branches with 18 24-hour veterinary centres across the UK. Underpinned by its partnership ethos, it is forging a national community of passionate vets, offering exceptional veterinary care that’s always there.