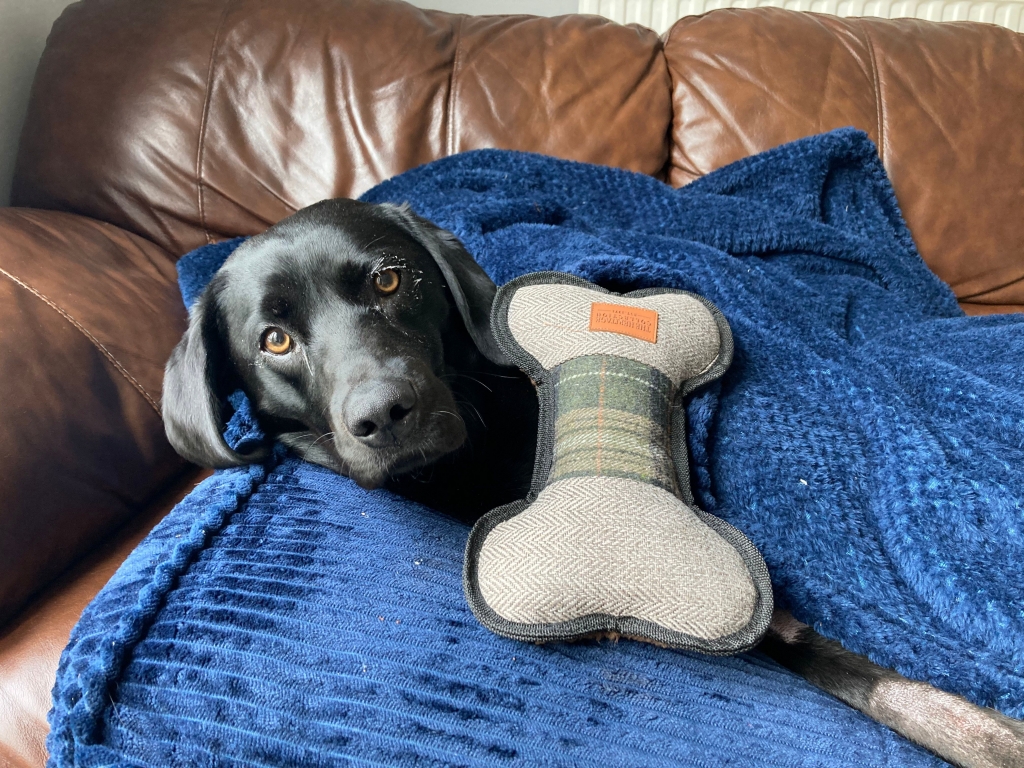 Lucky Labrador Molly is back on her feet, thanks to the multidisciplinary team at Scarsdale Vets in Derby

Molly, a 17-month-old black Labrador is “lucky be alive”, according to Scarsdale Vets in Derby following a freak accident that resulted in her becoming impaled by a 1-metre-long stick whilst out on a walk with her owners.

Fortunately, due to the sensible thinking of her owners and the skills and experience of Scarsdale Vets’ local practice and state-of-the-art referral hospital, life-saving surgery and careful aftercare, means miraculously, Molly has made a full recovery.

The freak accident occurred when Molly was chasing her ball down a wooded hill near to her home. She inadvertently ran onto a tree branch which went into her chest. Hearing her yelps and then seeing what had happened, her owners rushed her to Scarsdale Vets’ Stapenhill practice for emergency treatment, keeping the stick intact to avoid any further damage to their beloved Molly.

Upon arrival and seeing the stick protruding from Molly’s chest, Veterinary Surgeon Jen Lees and the team immediately swung into action and administered pain relief via an IV line and assessed Molly as best they could whilst she was conscious and calm.

Jen Lees explains: “I could feel the stick going half-way down Molly’s chest on the outside, but it then disappeared internally and I couldn’t feel the end, which was concerning. To find out how far in the stick was penetrating we sedated Molly to take x-rays. The x-ray showed that the stick had gone into her chest, through her diaphragm and into her abdomen, but as we couldn’t tell how much internal trauma there would be, it was safer to transfer her to our referral hospital Pride Veterinary Centre for specialist treatment.”

Fortunately, Stapenhill is part of Scarsdale Vets, which has one of the largest veterinary referral hospitals in Europe at Pride Park in Derby. Jen and Veterinary Nurse Serena Cutbill took Molly to Pride Veterinary Centre where colleagues Mark Longley (European Specialist in Small Animal Surgery) and the surgical team were waiting.

The first thing they did was to shorten the stick to minimise it being knocked and causing further trauma to Molly. She was anaesthetised so that Pride’s imaging team could take a 3D CT scan to see exactly where the stick was, what path it had taken through Molly’s body, and if there was any damage to her internal organs. As soon as the CT scan was taken, Molly then went into theatre.

Mark Longley, explains: “Amazingly, Molly was pretty stable on arrival and whilst her chest sounded fine and there were no worrying observations (other than the obvious), there was serious potential for there to be some life-threatening injuries if the stick wasn’t dealt with urgently, such as trauma to her lungs, liver and for the blood supply to her intestinal tract to be damaged.”

Mark, alongside a team of Anaesthetists, Theatre Assistants and a Resident Surgical Assistant, operated on Molly for two hours. Unbelievably, the stick had missed all of Molly’s major organs, blood vessels and arteries, and had travelled underneath her lungs and liver, pushing them out of the way.

Molly’s chest was opened using a surgical saw and an extra abdominal incision was made so Mark could see into both cavities. This was a crucial moment, as once the team could see the entirety of the stick (which had penetrated 40cm into her body) they were able to isolate it by placing sterile surgical swabs in between the stick and Molly. This prevented any further damage to her tissue and muscles and caught any dirt or loose bark from the stick. The team were then able to assess the path the stick had taken and carefully push it back out again, but the major concern was the potential for infection via contamination.

Mark Longley explains: “The stick was covered in bark, dirt and Molly’s fur, so my main concern was the risk of infection. The clean-up operation was key; once we had removed the larger bits of bark, dirt and hair with forceps, we had to repeatedly flush the area with sterile fluids to try and remove any smaller foreign bodies that were still present. The extra incision under her chest created another access point to help flush out any contaminates.”

Once the stick had been removed and the risk of contamination was as minimal as it could be, Molly’s chest was reconstructed and closed. The wound where the stick entered her body was managed as an open wound, as stitching it closed could have been problematic by trapping any residual contamination and increasing the risk of subsequent infection. Surgical swabs were packed into the wound and surgical dressings were placed on top. This was changed daily, allowing the body to push out any left-over debris. The additional surgical incision was stitched closed.

Mark Longley adds: “Molly is an incredibly lucky dog and her recovery was nothing short of remarkable - the next day you’d think nothing had happened! She is lucky to be alive – if the stick had moved just a few centimetres either way or hit any of her vital organs or major blood vessels, it’s unlikely she would have made it to Pride in the first place.”

After surgery Molly was in Pride’s Intensive Care Unit (ICU), so she could be closely monitored to ensure no air was leaking from her chest and to ensure she remained stable. She was given painkillers and antibiotics to prevent any infection. She stayed in ICU for 4 days and miraculously, 5 days after surgery, she was back at home with her owners. Her dressings were changed every 3-4 days at Pride, where the team also kept a close eye on her wounds to check they were healing well.

Now, just over a month after the accident Molly’s wounds have almost healed and there is no sign of any infection or adverse effects from the trauma. She is happy, healthy and back running around her local parks and garden with her owners.

Amy Gaunt, Molly’s owner, said: “Molly’s favourite thing in the world is her ball, and that day she chased after it with her usual gusto. She’s such an energetic dog and runs so fast, but unfortunately the stick got in her way as she pounced to collect her ball. The sound of her squeal was horrific, and we knew straight away that something was dreadfully wrong. She calmed down a lot when we reached her, and as my partner Ben and I had grown up with dogs we knew we needed to leave the stick in and get her to a vet immediately.”

“As you can imagine Molly, Ben and I were all very distressed but once we reached Stapenhill and then Pride we knew she would be well taken care of. We are so grateful to Jen, Mark and everyone else who treated Molly for taking the best care of her throughout her treatment. We love having her being back and home with us, and are so relieved that she has recovered so quickly.”

Mark Longley concludes: “Sadly, we see a lot of stick injuries, but these are usually in the mouth – I’ve never seen a case like this where a stick has penetrated both the dog’s chest and abdomen. Molly’s owners did exactly the right thing by not trying to pull the stick out and taking Molly to their nearest vets straight away. If something similar should happen to your dog, please leave the stick or object in place and take them to the nearest vet immediately.”

To find out more about Scarsdale Vets, visit: www.scarsdalevets.com