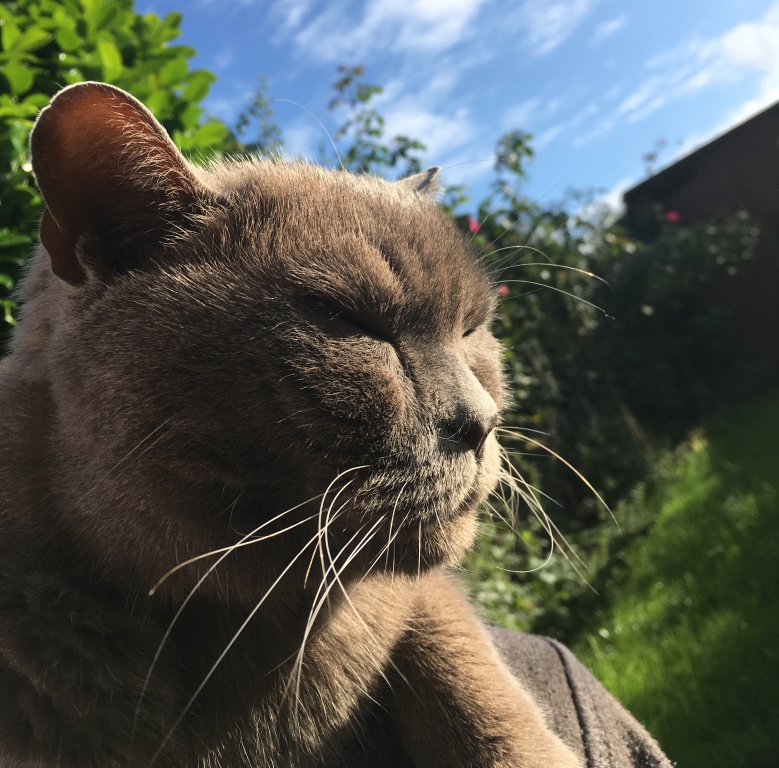 British Blue cat Codo is back to his best after undergoing laser-assisted brain surgery to dissect and remove a forebrain meningioma.

Twelve-year-old Codo hadn’t been quite himself for a couple of months. Although his owners found it difficult to pinpoint the precise problem, he had appeared quieter than usual and occasionally seemed uncharacteristically clumsy. He had also been struggling to get through his cat flap with his customary gusto, and eventually needed to be taken to his local vet after becoming very lethargic and starting to walk in circles. Although he returned to normal after being hospitalised for a couple of days, his owners were still worried and booked an appointment to see the Neurology service at Davies Veterinary Specialists in Higham Gobion Hertfordshire.

Codo appeared relatively normal when he was examined by Neurology Resident Victoria Argent, with normal limb coordination and intact spinal and cranial nerve reflexes. However, Victoria spotted a clue that all might not be well, with an inconsistent menace response in Codo’s right eye. This part of the neurological examination assesses all the components of the visual pathway, including the eyes, optic nerves and the regions of the brain that process visual information. Given the clues provided by his history, and the fact that his eyes were normal, Codo was diagnosed with a problem affecting his left forebrain. Subsequently an MRI scan revealed a large growth here, causing dramatic compression of the occipital and temporal lobes.

“Although it’s impossible to be certain without taking a sample, this had the typical appearance of a meningioma, a tumour of the membranes that surround the brain,” said Pete Smith, Head of Neurology and Diagnostic Imaging at Davies, who carried out the surgery on Codo. “Meningiomas in cats are typically slow-growing and, if they can be successfully removed, the outlook for affected patients is very good.”

Codo’s owners decided to go ahead with surgery. The operation involved removing a section of the skull directly overlying the tumour, allowing a margin to be delineated between the tumour and normal brain tissue.

“The tumour was very closely attached to the normal brain and to a shelf of bone within the skull running between the brain and cerebellum – the tentorium,” said Pete. “However, by using a thulium laser directed along an optic fibre to aid dissection, it was possible to break down the connections between the normal and abnormal tissue, allowing the tumour to be removed en bloc.”

Codo received expert anaesthetic care from Davies anaesthetist Heide Klöppel throughout his operation and recovered from the procedure without any significant complications.

“He was sitting up by himself later the same evening and started to show an interest in food the following day,” said Pete. “He became progressively more aware of his surroundings and responsive to having a fuss and was discharged home two days later.”

The tumour was sent for histopathological analysis and was confirmed as a meningioma, with a very low rate of cell division.