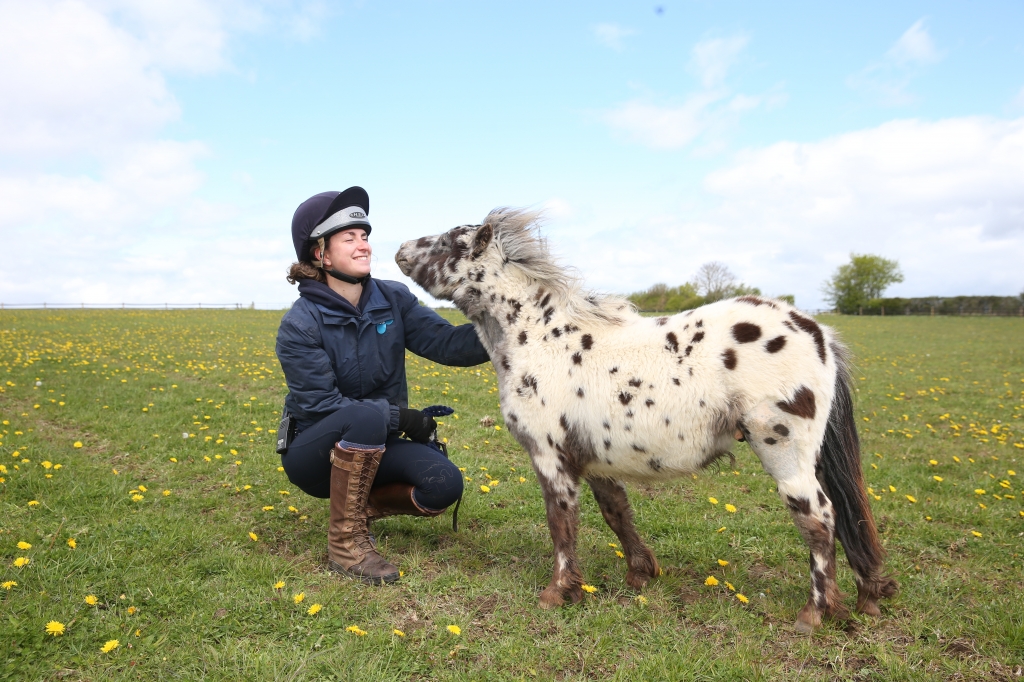 A miniature Shetland pony who struggled to walk when he arrived in the care of Blue Cross as a foal with his mother is thriving in his new home after more than 170 days in the charity’s care.

The tiny foal arrived at Blue Cross in Burford aged just eight months last November with his nine-year-old Shetland mother Princess after they were rescued by the RSPCA.

The pony, who the team called Doolittle, needed surgery to help him walk as because he had been bred to be so tiny, some of the joints in his legs hadn’t properly developed.

“The ligament which usually releases as the horse moves its leg was getting stuck on the patella, so his legs would get stuck in place.

“It wasn’t painful for him, but it wasn’t very comfortable either.

“Sadly, this is quite common in the tiny Shetlands, due to the bad breeding that often happens.”

Doolittle needed an operation to correct the problem and allow him to move with ease.

Two weeks of box rest and a further fortnight on soft woodchip followed, but he was soon back to prancing about his paddock and was ready to leave his mother’s side.

Jess said: “He’s always been a confident little guy, but we were quite worried about introducing him to other ponies as he is so small.

“We took it slowly and introduced him to some slightly bigger horses with his mother and he took it all in his stride, so we knew he was ready to find a new gang of his own.”

The team buddied Doolittle up with two cobs of a similar age – Ghost, who had also come from an RSPCA rescue and Brook, who had come from another home. The trio were soon inseparable.

“Doolittle really came into his own when he was paired with Brook and Ghost and relaxed so much more,” adds Jess.

The team continued to work on the ponies’ socialisation, which includes introducing new objects to their field for them to explore and practicing farrier handling.

Once he was ready, Doolittle was put up for rehoming and it wasn’t long before the fluffy foal caught the eye of a new family.

After 173 days in Blue Cross care, he went off to his new home where he joined another former Blue Cross Shetland pony Shaun.

His new owner Joanne said Doolittle has gone from strength to strength in his new home since arriving with them in May.

She said: “After losing Shaun's best friend to old age we were on the lookout for another four legged friend to keep him happy and came across the cutest little face via Blue Cross.

“Next thing you know Doolittle arrived and settled straight into the madhouse! He instantly became friends with Shaun and they are always seen messing around and winding each other up under the watchful eye of Olly.

“Over the last few months of having him he has grown from strength to strength and has such a lovely confident character! He enjoys cuddles from everyone and finds pooh picking extremely exciting...he doesn’t have a problem with movement anymore!

“He has been a great addition to the gang who is adored by everyone that meets him.”

Doolittle’s mother Princess also had an happy ending of her own, having also gone to a new home where she is thriving.