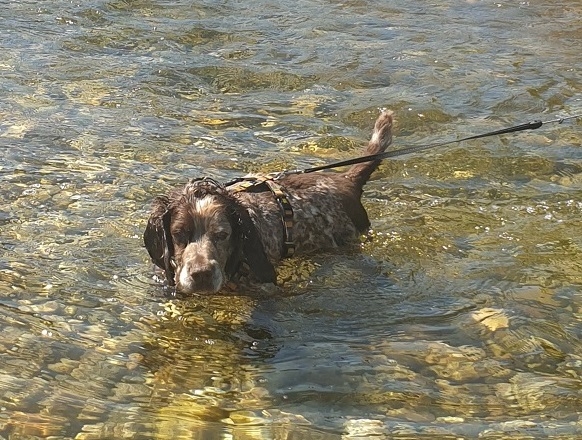 Life’s looking good again for an ageing sprocker spaniel whose sight was blighted by swollen and ulcerated eyes and degenerating corneas.

The 13-year-old family pet called Murphy, underwent corrective surgery on both eyes at the highly-regarded Eastcott Veterinary Referrals in Swindon, and can now focus clearly on enjoying a bright future with his family.

After initial consultation and diagnosis, the expert team at Linnaeus-owned Eastcott carried out a keratectomy and “Gunderson graft” operation to help stabilise the dog’s corneal endothelial dystrophy in both eyes.

The procedure was led by Eastcott’s head of ophthalmology and advanced practitioner Ida Gilbert, who explained: “Murphy was referred to us with a history of recurrent and chronic ulceration in both eyes.

“He had blepharospasm in both eyes, mild corneal oedema in the left eye and moderate oedema and haze in the right eye.

“Endothelial dystrophy is a progressive, spontaneous problem which is mostly seen in elderly dogs, but with certain breeds predisposed, such as Boston terriers, Springer spaniels, Chihuahuas, Dachshunds and Dalmatians.

“There is no cure but dogs do very well with surgery, which often seems to slow down the disease progression in the rest of the cornea.

“The Gunderson graft is our favoured procedure as it removes the superficial waterlogged and often scarred cornea, then replaces it with a thin conjunctival graft, which is normally very well accepted and allows useful vision in most cases and reduced risk of painful ulcers.

“Murphy certainly responded very well with a resolution of his ocular discomfort, the retention of good vision overall and he’s not had any further ulcers since his surgery. We’re all extremely pleased with him.”

Murphy’s delighted owner Clare Dodwell, from Fairford in Gloucestershire, was full of praise for the ophthalmic experts at Eastcott and said they had given her pet a new lease of life.

Clare said: “Murphy’s eyes were in a poor state, as both were very red and blistered and the vets said he was in immense pain.

“He’s an older dog and we did not want him to suffer so we had to decide whether to put him to sleep or to risk the operations.

“I was absolutely bowled over by how amazing the staff at were, especially operating in the midst of this Covid pandemic.

“I can’t praise everyone enough. They have a great team at Eastcott and Ida was quite extraordinary.”