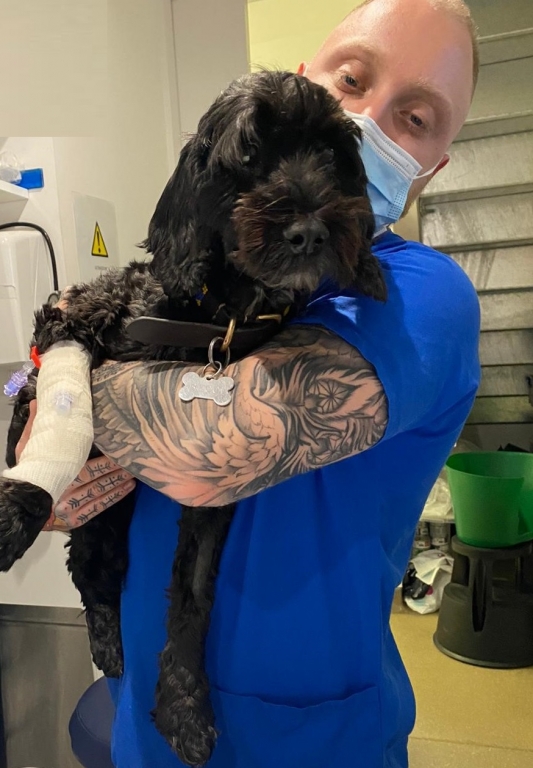 Vets operating on an off-colour dog called Malbec were stunned to find all her internal organs had been stained green by a severe leak of bile into her abdomen.

The discovery was made as the eight-year-old underwent surgery to remove her gall bladder at Linnaeus-owned London Vet Specialists in Belsize Lane, North London.

“Her referring vets had found evidence that her gall bladder had ruptured and were concerned the fluid obtained for diagnosis was infected.

“It was clear Malbec was hugely jaundiced, while an abdominal ultrasound scan under sedation revealed the presence of a significantly diseased biliary tree and moderate amounts of free fluid within this area.

“Abdominocentesis was performed, which confirmed bile peritonitis due to total bilirubin of the effusion being two times higher than that in the blood (410umol/L).

“Luckily, there was no sign of a lower glucose within the fluid than in her blood, and no evidence of bacteria within neutrophils visible on in-house microscopy, making a septic process unlikely.

“Malbec then underwent a general anaesthetic for cholecystectomy (gallbladder removal) with our surgical team, during which liver biopsies were taken and a gastric feeding tube placed to help with post-operative management.

“It was immediately apparent all of Malbec’s abdominal organs had been stained green due to the bile leakage, and even after her gallbladder had been removed and her abdominal organs flushed with lots of sterile saline, this discoloration was still present.

“We were shocked to find such a severe bile leak, as most dogs would be incredibly unwell, but lovely Malbec had still been walking around and wagging her tail!

“Malbec recovered well from surgery and was allowed home one week later. She became stronger day by day and was signed off by the surgery team when her gastric tube was removed four weeks post-surgery.

“Malbec really is a remarkable dog and has exceeded all of our expectations,” added Luke.

For more information about London Vet Specialists, and the services it offers, visit https://londonvetspecialists.vet/.

England. England
We are currently representing a number of out of hours providers across the UK who are seeking experienced Veterinary Surgeons to join their...

Kidlington, Oxfordshire. United Kingdom
Do you have a certificate in Cardiology or Surgery? Or are you perhaps working towards one?Would you like to be a part of an exciting n...

Basildon. United Kingdom
I am recruiting for an extremely well-equipped Hospital practice based in Essex seeking a ECC Veterinary Surgeon to join their excellent Nig...