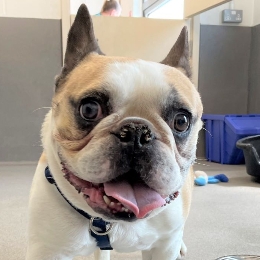 Close up of smiling pug

Battersea is warning the public of the risks popular flat-faced dog breeds, such as Pugs, are exposed to after the leading animal welfare charity revealed that they have performed life-saving surgery on nearly half of all these dogs to be given in to them.

With their overexaggerated features, such as big eyes and snub noses, it’s no wonder that flat-faced dogs are some of the most popular dog breeds in the UK. According to the Kennel Club, French Bulldogs were the nation’s favourite breed in 2021, with Bulldogs and Pugs coming in at fourth and tenth place respectively[1]. However, their trendy looks and popularity can come at a costly and life-threatening price.

Flat-faced, or brachycephalic, dogs often struggle to breathe in a normal way as a result of their extreme features and even simple activities, such as running or playing, can be a struggle for these animals.

To be able to breathe properly, many of these dogs will require complex Brachycephalic Obstructive Airway Syndrome (BOAS) surgery to open up their airways. The operation can come as an unexpected cost to owners, with veterinary practises charging thousands of pounds for the procedure which is often not covered by insurance providers.

Ten-year-old French Bulldog, Max, came into Battersea after his owner could no longer afford to keep him. When Max arrived, the charity’s vets soon found that Max was not only just struggling to breathe as a result of his flat-face, but he was also suffering with skin infections and eye ulcers, which is another side effect of being a brachycephalic breed.

Thankfully, Battersea was able to provide Max with vital medical care to help him live a better quality of life and he was soon rehomed to a loving new owner. However, Max, and other dogs like him, will never be able to run and play as freely as dogs with longer noses and will constantly require additional care- a costly price to pay for their cute looks.

Claire Turner, Veterinary Surgeon at Battersea said: “Whilst breeds like French Bulldogs are undoubtedly cute, they’re also a classic example of irresponsible breeding. Over the years, so-called breeders have chosen the dogs with flattest, ‘most fashionable’, faces to breed from, which has led to some dangerous health problems.

“Many brachycephalic breeds have airways so narrow that even carrying out simple tasks can be a struggle, and many will never be able to live the life of a normal dog. On top of this, irresponsible breeding has led these dogs to face a multitude of other health issues, such as excess skin folds and eye infections which comes as a result of their poor conformation. I’d encourage anyone breeding and buying these dogs to consider the heath of the litter.

“No animal should have to suffer for the sake of fashion, but for these dogs their looks could literally kill- they pay the ultimate price for their breath-taking looks.”

To find out more about brachycephalic breeds and the work the Battersea does, please visit www.battersea.org.uk.

Coventry. United Kingdom
A large charity SA centre in Coventry are recruiting for a new Surgeon to join their team on a full-time, permanent basis.40 hours week with...

Croydon. United Kingdom
If you want to make a difference and join our amazing organisation, you will be a qualified vet who enjoys working as part of a large and cl...

Brighton. United Kingdom
We have a large friendly team of vets with a broad range of experience. This, combined with the large surgical caseload here means that you ...

Edinburgh. United Kingdom
If you want to make a difference and join our amazing organisation, you will be a qualified vet who enjoys working as part of a large and cl...