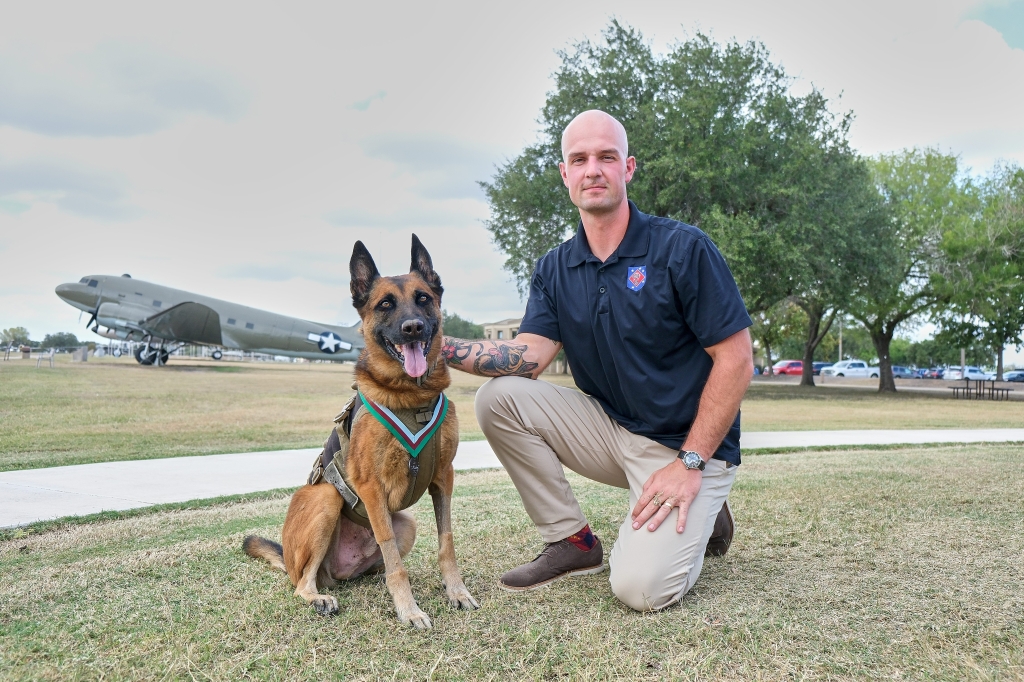 Bass, recipient of the PDSA Dickin Medal - the animals equivalent of the Victoria Cross, with his former handler, Staff Sergeant Alex Schnell

A retired US Marine Corps dog has today (24 January 2023) become the 75th recipient of the PDSA Dickin Medal* - the animals equivalent of the Victoria Cross.

The highest honour available to animals, Multi-Purpose Canine (MPC) Bass was presented with the award for his bravery and life-saving devotion to duty after his six-year service in the US Marine Special Operation Command (MARSOC).

Ten-year-old Bass was deployed to Afghanistan, Iraq and Somalia during this time, where he conducted more than 350 explosive sweeps and 46 high-value missions. But it was during a night-time, air-borne raid targeting a Taliban bomb-maker in May 2019 when Bass’ devotion to duty was truly shown.

The now-retired Belgian Malinois, who lives in San Antonio, Texas, with his former handler, Staff Sergeant Alex Schnell, was presented with his Medal during a virtual ceremony with Jan McLoughlin, Director General of PDSA, the UK’s largest veterinary charity. The video of Bass’ story and presentation can be viewed at www.pdsa.org.uk/bass.

Discussing the honour, Jan said: “Bass displayed conspicuous gallantry and devotion to duty in aiding the success of his team’s mission that evening in 2019; his actions undoubtedly prevented additional loss of life.

“Bass’ life-saving actions on that night, make him a truly deserving recipient of the PDSA Dickin Medal.”

Maria opened her first PDSA veterinary clinic in 1917, with the aim to ensure no pet was denied veterinary care because of their owner’s circumstances – a mission the charity continues today.

By the start of WWII, PDSA had Pet Hospitals across the country and was helping thousands of pets and their owners every year.

In 1943, after seeing the incredible difference animals were making in the war effort, Maria awarded the first PDSA Dickin Medal, which she established to recognise animals that display conspicuous gallantry or devotion to duty in the field of military conflict. Nearly 80 years later it remains the highest award any animal can receive.

Born on 25 May 2012, Bass joined the US Marine Special Operation Command alongside his handler Alex Schnell in 2014.

As an MPC, Bass brought many capabilities to the teams he served with, from detecting explosive material to performing team protection through controlled aggression and tracking the movements of target groups.

He was deployed four times during his service to three separate countries; Afghanistan, Iraq and Somalia where he conducted more than 350 explosive sweeps and 46 missions to capture high-value targets.

It was 20 May 2019, while on deployment in Afghanistan, that the US Marine Special Operation Team, accompanied by MPC Bass, conducted a night-time, air-borne raid to target a Taliban bomb-maker in Helmand Province.

As the team approached the target structure, hidden Taliban fighters unleashed a barrage of small arms fire and detonated an Improvised Explosive Device (IED). This initial enemy contact killed two Afghan partners that were working as part of the MARSOC team and suggested the presence of additional IEDs.

In order to avoid frontal assault against a barricaded enemy, the team began clearance of a building adjacent to the enemy stronghold, to allow them to gain a safer vantage point and a place to take care of their casualties.

Bass took the lead in the clearance and immediately identified an IED located adjacent to the doorway of the building that the team intended to clear.

After finding another entry to the building, Bass continued to sweep the structure and identified four additional IEDs.

These finds, while in an active firefight with barricaded enemy fighters, directly resulted in American and Afghan lives being saved as the team worked through the mine-laced area.

MPC Bass’ devotion to duty in identifying explosive devices, aiding the success of the mission that evening, undoubtedly prevented additional loss of life.

PDSA Director General, Jan, continued: “Whether they are working dogs like Bass, or pets in our homes, animals have a truly unique role in our lives.  Every day in our Pet Hospitals, PDSA’s vets and vet nurses see and protect the incredible bond between pets and their owners. Which is why PDSA continues our founder Maria Dickin’s mission – to ensure no pet suffers because of their owners financial circumstances and to honour the incredible role they play in our society.

“Bass is a wonderful example of how vital animals are. His exceptional abilities and determination were apparent to all who served with him, and he was a clearly respected member of the team. I am proud to present him with the PDSA Dickin Medal.”

Reacting to the award Bass’ handler, Alex Schnell, said: “It is truly one of my greatest honours to see Bass awarded the PDSA Dickin Medal. Bass is an incredible dog and I hope his story helps to demonstrate just how important animals are to our armed forces, and the key, sometimes life-saving, roles that they play. We are all incredibly proud that PDSA has recognised Bass in this way.”

Bass was nominated for the award by former US Marine Corps dog handler and retired MARSOC K-9 Program Manager, Chris Willingham. He said: “Bass and Alex made an incredible team and were amongst the top five per cent of Marines I had the honour of serving with. Bass’ service and skill demonstrates the finest traditions of K-9 and I am thrilled to see his achievements recognised with the PDSA Dickin Medal.”

The PDSA Dickin Medal is a large, bronze medallion bearing the words “For Gallantry” and “We Also Serve” all within a laurel wreath. The ribbon is striped green, dark brown and sky blue representing water, earth and air to symbolise the naval, land and air forces. The Medal has been awarded 75 times to 38 dogs (including Bass), 32 pigeons, 4 horses and 1 cat. For more information go to www.pdsa.org.uk/dickinmedal