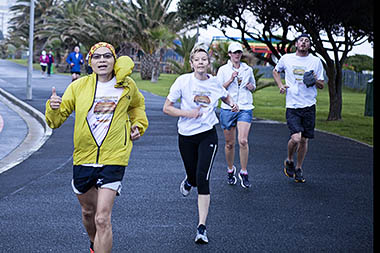 An image of last year's Fun(d) Run which took place during WSAVA World Congress in Cape Town, South African, in September Delegates to WSAVA World Congress 2015 are being urged to raise funds to control rabies in Africa by signing up for the third 'Fun(d) Run' organized by the WSAVA's charitable Foundation. WSAVA World Congress takes place in Bangkok, Thailand, from 15-18 May 2015. A 5 km run and 3 km walking course through the heart of the city are being created and the event will take place during Congress. Proceeds will be used by the WSAVA Foundation's AFSCAN initiative to help launch a project in Africa to fight rabies in the most exposed countries and areas. The African Small Companion Animal Network (AFSCAN), launched in early 2014, aims to advance standards of veterinary care across Africa through facilitating the creation of a sustainable network of companion animal veterinarians, associations and specialist groups in Sub-Saharan Africa. One Health is a focus for AFSCAN, making the surveillance and control of diseases, such as rabies, a priority for activity. AFSCAN has Zoetis as its major supporter. Commenting, Dr Gabriel Varga, Chairman of the AFSCAN Board and Director of Business Operations for Zoetis North Europe region, said: "The AFSCAN project has ambitious goals to transform the veterinary landscape across Africa and to make strides in controlling dangerous but preventable diseases, such as rabies. "Our event in Bangkok will be our Third Fun(d) Run and we are delighted at the enthusiastic support it is receiving, which grows every year. More than 300 veterinarians braved challenging weather to take part in the event in Cape Town in September 2014! "The proceeds from both of our previous runs were donated to Mission Rabies, a project led by Worldwide Veterinary Services (WVS) and Dogs Trust, which is contributing to work to eliminate rabies from the world by 2030 by running mass dog vaccination campaigns in disease hotspots in India and Africa. "Our WSAVA Foundation Fun(d) Run and Walk for 2015 will be even bigger and better, with medals for the fastest 15 men and women. We hope it will be very well supported to enable us to get our rabies project, which we are running in partnership with Mission Rabies, off to the best possible start. "We hope all delegates will want to take part, either in the Fun(d) Run itself or in the more leisurely walk - and that they will encourage their friends to sign up too!" The WSAVA Foundation's Fun(d) Runs are kindly supported by Hill’s Pet Nutrition and Zoetis. Register now to participate in the 2015 Fun(d) Run.