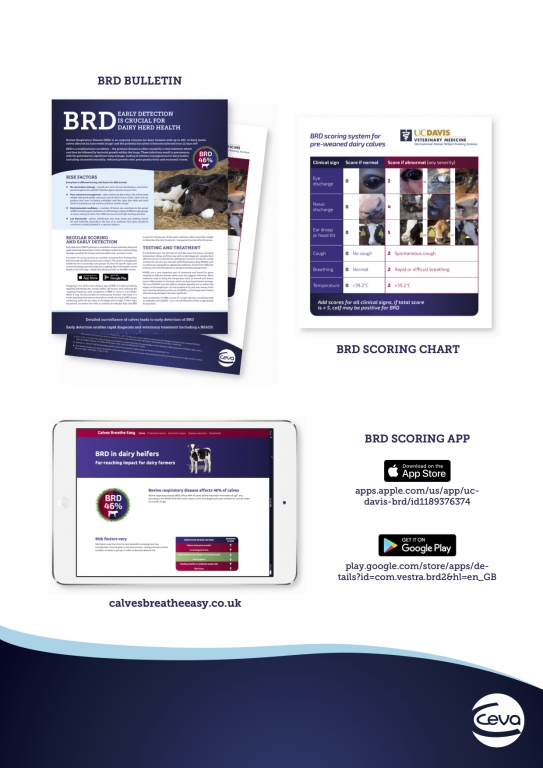 Vets are being urged to raise awareness of the early signs of BRD (Bovine Respiratory Disease) amongst farmers to ensure early detection and treatment to reduce the impact of the disease.

The move follows research which reveals that BRD affects 46% of calves before they reach nine weeks of age1, with a recent study using ultrasound imaging to assess lung damage in young dairy calves revealing that lung lesions can develop as early as 12 days of age and have long-term effects2.  Moreover, according to the AHDB 2016 fallen stock report, BRD is the most diagnosed cause of death for animals under six months of age.

Many farmers only consider the immediate treatment costs plus the loss of daily liveweight gain (estimated at an average £453 per case) but this is just the tip of the iceberg compared to the economic impact of BRD in young dairy heifers because of the long-term knock-on effects associated with decreased longevity and production.  It is estimated that the overall cost could be closer to £772 per animal4; this includes the immediate cost of treatment, a two-week delay to first calving, a 4% and 8% reduction in first and second lactation milk yields respectively and a lifetime reduction of 109 days in-milk caused by reduced longevity.

Ceva Animal Health has launched an extensive range of support material to help vets educate farmers on the prevention, early detection and treatment of BRD and the importance of using a non-steroidal anti-inflammatory (NSAID) alongside appropriate antibiotic therapy in all affected calves to reduce pyrexia and minimise lung consolidation, which has a negative impact on growth.  The new support material includes a series of ‘CalfEd’ Bulletins for vet practices to distribute to farmers featuring up-to-date information on early detection, production losses and economic losses, a farmer website on the disease – www.calvesbreatheeasy.co.uk, a BRD scoring system for pre-weaned calves and social media posts.  Ceva has produced a useful infographic, which features the BRD scoring system, to remind farmers of the long-term impact of the disease on health and performance and the importance of prevention, early detection and early treatment.  The company will also raise awareness of BRD in an advertising campaign in farming media.  The scoring system was developed by University California, Davis and more information for farmers on how to detect BRD early can be found on the UC Davis App: https://apps.apple.com/us/app/uc-davis-brd/id1189376374 Apple) or https://play.google.com/store/apps/details?id=com.vestra.brd2&hl=en_GB(Android).

“BRD remains one of the UK’s most prevalent diseases in dairy calves which can lead to long-term knock-on effects associated with decreased longevity and production.  The lifetime total economic cost could amount to over £700 per dairy heifer,” comments Gemma Robinson BVM BVS MRCVS, ruminant veterinary adviser at Ceva Animal Health, manufacturer of ZELERISÒ.  “The cost of adding a NSAID into a BRD treatment plan is minimal compared to the long-term economic losses caused by chronic lung consolidation which is why it’s important that vets promote the benefits of prevention, early detection and early treatment of the disease to their clients.”

ZELERIS is an antibiotic and NSAID and features the unique combination of florfenicol and meloxicam in one convenient injection.  Studies have shown that 172 days following treatment, cattle treated with the combination of an antibiotic and meloxicam had significantly higher liveweights than those treated with antibiotic and saline5. The dose rate of 1ml/10kg is easy for farmers (and vets) to remember, while the syringeability of ZELERIS is proven to be four times faster than similar treatments, even on cold days6. Moreover, the CLAS shock-resistant vial makes ZELERIS ideal for farm conditions.

To request the BRD support material or for further information on ZELERIS please contact your local Ceva account manager, call Ceva on 01494 781510 or email cevauk@ceva.com.