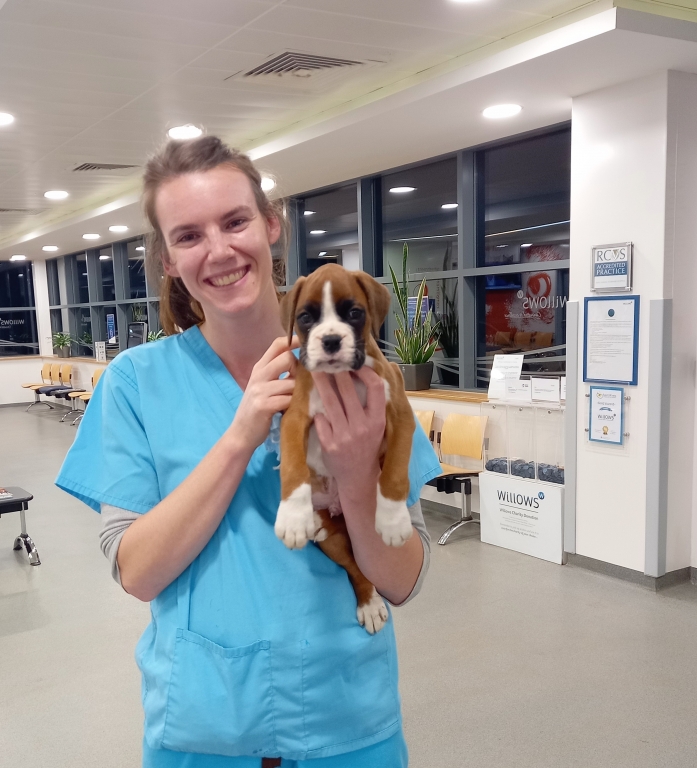 A tiny, minutes old puppy, born with its intestines outside of his body, has been saved after expert emergency treatment at one of the UK’s top veterinary hospitals.

The newly-born Boxer, called Toby, was less than an hour old when he was rushed to the renowned Linnaeus-owned Willows Veterinary Centre and Referrals Service in Solihull, West Midlands.

Moira said: “The call was from a lady who described how a puppy had just been born with ‘pink wiggly tubes’ coming from the abdomen.

“I asked her to bring the puppy in immediately and to cover the intestines with a damp paper towel to reduce any further trauma, contamination and drying of the exposed tissues.

“On arrival, the puppy was actually very bright and active, despite his underlying problem – he had been born with his intestines herniated through his umbilicus (belly button).

“This was most likely caused by a body wall defect or widening of the umbilical region creating a weakness in the abdominal wall.

“The intestines had most likely been pushed through this weakened point by the increased abdominal pressure created when passing through the birth canal.

“The good news was that the intestines still appeared viable with no discoloured areas of compromised tissue.

“Toby was given some pain relief into his muscle and local anaesthetic was injected into the abdominal wall tissues in front and behind the body wall defect.

“During surgery, the intestines were cleaned first and then replaced into the abdominal cavity and the wound was successfully closed.

“We had to consider which drugs were safe to use for the surgery on such a young patient, how to keep him warm during and after the procedure, and then ensure he was comfortable post-operatively.

“Toby came through strongly and recovered well. Within 30 minutes he was back on the move on his heated bed and letting us all know he was feeling hungry!

“He was closely monitored in our intensive care unit by our expert nursing team and had responded so positively that he was discharged the following day.”

An added complication in this case was that Breeder Sarah Moore, from Beoley, Redditch, was on holiday at the time and her house-sitter had to deal with the whole drama.

Sarah admitted: “I was stunned to learn Toby had been born with his intestines on show, which Moira said is rare.

“I’ve been a breeder of Boxers for five years and I have never had anything like this before, so it was quite a shock.

“What’s worse, I was camping in Wales at the time with no phone signal so, unfortunately, poor Leonie, my house-sitter, had to deal with all the drama.

“She was mortified and in floods of tears. She couldn't even get hold of me for advice or to ask what she should do when the vet required a decision between putting the puppy to sleep or going ahead with the operation.

“It really was that touch-and-go with Toby less than an hour old by the time he reached the emergency vets at Willows.

“Leonie said Moira was absolutely brilliant, especially with help and advice when she was in the difficult situation of not being able to reach me.

“The surgery she performed was so quick and efficient she definitely saved Toby’s life, so we couldn't have asked for anymore!

“I was totally unaware of what was happening and only found out about it all once the surgery had been completed. I was told it had all gone as well as it could and that Toby was recovering well, which was a huge relief.

“He was apparently already very lively again and wriggling around despite having undergone the operation but I was told the danger was not over as there was still a high risk of infection.

“Moira said only time would tell if he would survive, which, thankfully, he did and I’m so grateful to her and everyone at Willows. I’d definitely recommend them to other pet owners.

“Toby has made a fantastic recovery and has now gone to live with his new owner in Kent and is being truly spoilt. After all he’s been through, he deserves it!”

To find out more about Willows’ wide range of specialist services, visit www.willows.uk.net or search for Willows Veterinary Centre and Referral Service on Facebook.