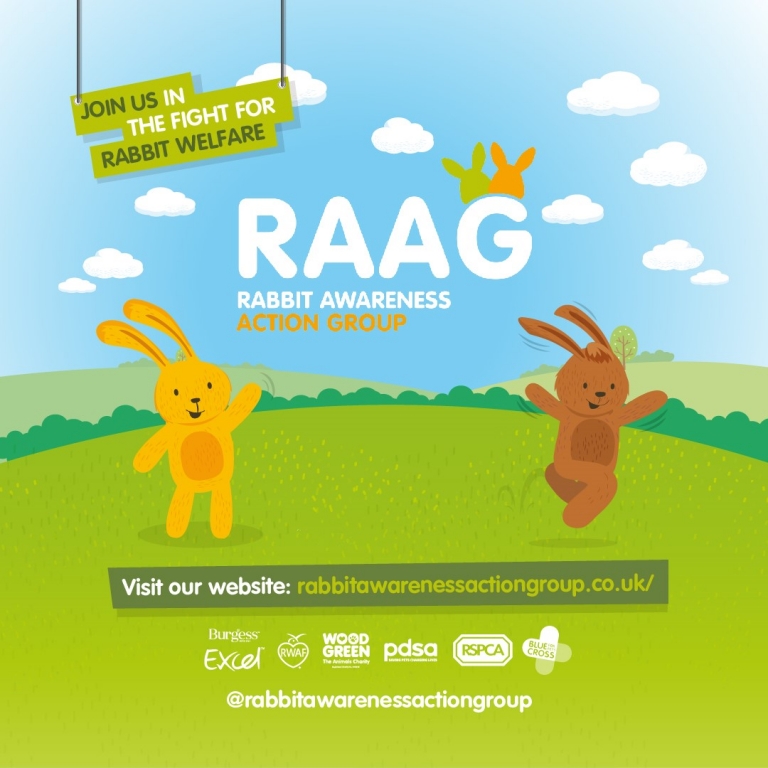 Burgess Pet Care has today announced the launch of the Rabbit Awareness Action Group (RAAG), which draws on the combined knowledge of a coalition of experts who have, for over 15 years, campaigned through Rabbit Awareness Week (RAW) to improve the lives of rabbits with profound, positive results.

Led by Burgess Pet Care, members of RAAG, comprising the RSPCA, Rabbit Welfare Association & Fund (RWAF), Wood Green The Animals Charity, Blue Cross, and PDSA are committed to building on the achievements of RAW, and continuing to improve the lives of the UK’s pet rabbits by raising awareness of their five key welfare needs1 among new and established owners.

Dr Suzanne Moyes, Operations & Technical Director and in-house Vet at Burgess Pet Care, said: - “Whilst we have made great strides through 15 years of RAW campaigning, we recognise that rabbits’ popularity as a pet has increased, and that they remain one of the UK’s most owned, but least understood, animals.

“The first  Good Practice Code for the Welfare of Rabbits in England, which was launched during RAW 2021, provides the perfect opportunity for RAAG to throw the spotlight on the particular needs of these wonderful creatures through planned, year-round activity designed to ensure greater understanding for their health and welfare requirements, including a call for all rabbit supporters to sign up to the Code.

“RAAG is determined to throw our collective voice and influence behind the new Code to ensure that it is well-understood by everyone; and is widely publicised and high on the agenda – now and in the future,” Dr Moyes added.

Following this year’s RAW, Burgess ran surveys among owners and vets to determine what this year’s campaign, ‘Hopping Through the Years’, which focused on rabbits’ welfare throughout their lifetime, had achieved: -

Dr Richard Saunders BVSc DZooMed MRCVS. EBVS®, veterinary specialist advisor to RWAF and one of the key stakeholders involved in delivering the Good Practice Code, said: “Whilst the research findings following this year’s RAW campaign are really encouraging, sadly it remains the case that far too many rabbits continue to have woefully inadequate housing, live alone with little stimulation, and are fed incorrect diets, which can lead to numerous health problems. Our ultimate aim is to see the Good Practice Code enshrined in law as a framework by which all owners and key groups such as retailers and rescues can build their practices around to ensure a bright future for these very special animals.”

For further information and to support the work of RAAG, please visit the  website:
https://www.rabbitawarenessactiongroup.co.uk.