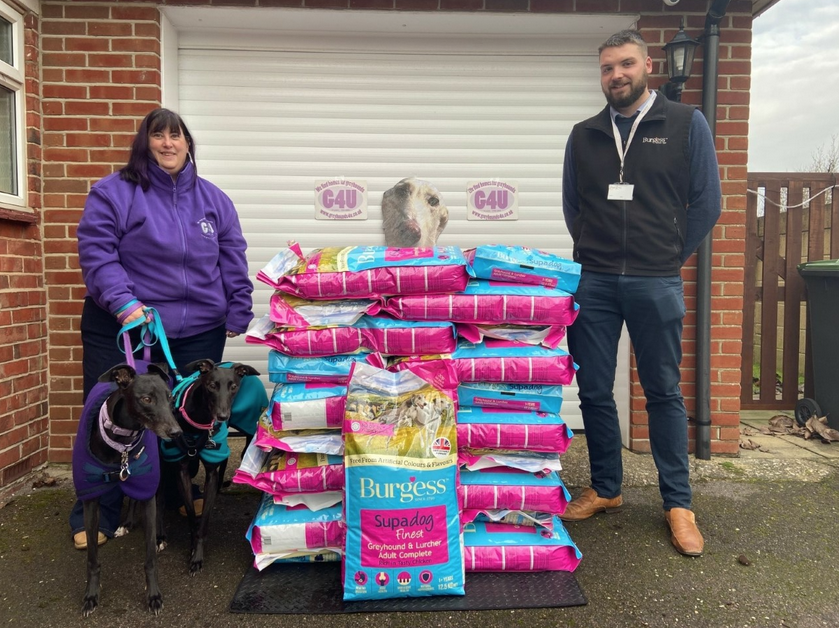 Burgess Pet Care is celebrating the success of its recent Greyhound & Lurcher “Two-week Takeover” campaign, which saw staff from Burgess embark on a 3,000-mile road journey to donate over £6,500 worth of Burgess Supadog Greyhound and Lurcher food to five lucky greyhound and lurcher rescue centres across the UK.

Since 2019, during its two week campaign Burgess Pet Care has made a generous donation to greyhound and lurcher rescues, with a 20 pence donation from every purchased pack of Supadog Greyhound & Lurcher going straight into food donations for rescue centres.

This year’s online campaign reached thousands of people and included a two-week takeover of Burgess Pet Care’s social media channels to share information about greyhound and lurchers and what makes them wonderful pets. The channels also shone a light on some of the fantastic work being carried out by UK greyhound and lurcher rescue centres.

As well as creating Facebook frames for greyhound and lurcher owners to use on their profile photos and running competitions to win free bags of Supadog food, Burgess encouraged its followers to nominate UK greyhound and rescue centres as recipients of a large donation of Burgess Supadog Greyhound & Lurcher food.

The five rescues that received the most nominations were: Greyhounds 4 U (Hampshire); Greys Eleven Plus (Thetford); Seaside Greyhounds (Lincolnshire); Makants (Manchester); and Forever Hounds Trust (Exeter).

“The pressure on rescue centres has reached an all-time high due to the impact of the pandemic, not only with an increase in the number of greyhounds and lurchers needing homes, but with their fundraising efforts becoming even more challenging. Day in, day out, these centres and volunteers carry out amazing work to rehome and support the health and happiness of animals.

“It has been hugely rewarding to receive such an incredible response to this year’s Greyhound and Lurcher campaign; an overwhelming majority (95%) of owners we surveyed said they would recommend one as a pet, which we hope will encourage any future pet owners to consider welcoming a greyhound or lurcher into their homes.”

“We were delighted to be invited to take part in the recent Greyhound and Lurcher Two Week Takeover. Our volunteers enjoyed being involved in giving hints and tips regarding the care and grooming of greyhounds and to share their expertise via a video segment on social media. Being a small, self-funded rescue, we were grateful for the opportunity to raise our profile on other social media channels and to spotlight these wonderful dogs.”

“It’s been wonderful to receive such a generous donation from Burgess Pet Care. We are a small organisation and it has been very difficult for us to fundraise over the past year, so we have been really moved by the fact that so many of our supporters nominated us. We receive no government funding so donations are incredibly important in supporting our work.”

It is a sad fact that each year, thousands of greyhounds and lurchers are put up for adoption when their professional careers have ended. However, as Clarissa Baldwin CBE, Chair at the Greyhound Forum explains, they make wonderful pets:

“During the Covid lockdowns many hundreds of greyhounds and lurchers have been adopted and have gone to new homes. However there are many more needing a loving, caring home to go to. This breed is one of the most gentle and loving, and we urge anyone thinking of taking on a dog to consider one of these noblest of dogs - and to visit, where possible, their local Rehoming centre to offer a home.

“We are very grateful to Burgess Pet Care for being so supportive of greyhounds and lurchers,” Clarissa added.

Pictured, Debbie Buxcey, founder of Greyhounds 4U, one of the winning rescues to receive a donation from Burgess Pet Care, with Sean Deere – National Account Manager for Burgess