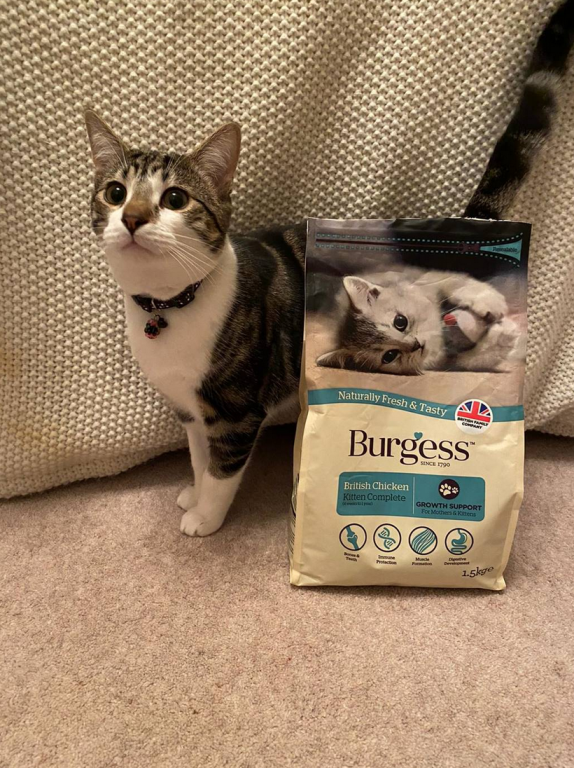 Burgess Pet Care is delighted to be demonstrating its care and support for Yorkshire Cat Rescue this Valentine’s Day by sending the charity much-needed food donations to help the cats and kittens in its care over the winter months.

Since the partnership between Burgess Pet Care and Yorkshire Cat Rescue began in June last year, the charity has been able to feed hundreds abandoned and unwanted cats and kittens in Yorkshire and beyond, thanks to Burgess’s regular donations of cat food specifically made for kittens, adult and mature cats. Crucially, Burgess also donates its neutered cat food, as Yorkshire Cat Rescue has a policy that all cats and kittens in its care are neutered prior to being adopted.

“Yorkshire Cat Rescue is working at full capacity but because of the new regulations around social distancing and lockdown, every intake and relinquishment is taking so much longer, which has impacted on the number of cats and kittens we are able to manage.  Our costs have increased significantly; with no one allowed to visit the centre, we are delivering cats and kittens to new adoptees ourselves.

“It is a pleasure working with Burgess Pet Care and this partnership helps so much with the food needed for our cats and kittens. It means that we are able to put more of the money we raise into getting them ready for adoption; the costs of neutering and vaccinating really adds up when you have so many cats to care for.”

Nicole Fallon, Senior Brand Manager at Burgess Pet Care added: - “We are delighted to support the wonderful work of Yorkshire Cat Rescue, particularly as the charity is facing more challenges than ever as a result of the pandemic.

“February isn’t just about Valentine’s Day; it’s also National Love Your Pet Day (20 February) - a chance to think about offering a loving, forever home to a rescue cat, and to show your cat how much you love them by helping them to lead happy, healthy lives. Life stage foods can play an important role in helping cats maintain good health throughout different stages of their life, with their specific needs being met through nutritionally balanced recipes, including for neutered cats requiring fewer calories.”

Since the PDSA first surveyed veterinary professions 10 years ago, lack of neutering has consistently been one of the most frequently chosen welfare issues associated with cats. While 73% of owners say that their cat is an ideal weight, the report also notes that obesity in cats was highlighted as one of the top five welfare concerns in the PDSA’s veterinary professionals’ survey by 44% of respondents.

“While neutering a kitten or cat has many positive benefits to their overall health and wellbeing, it does mean that cats’ needs change. This includes them needing fewer calories - their bodies don’t have as much work to do, as they are likely to spend more time in their home – and it reduces the risk of a cat suffering from pyometria, as well as cancers of the ovaries, uterus and mammary glands later in life.”