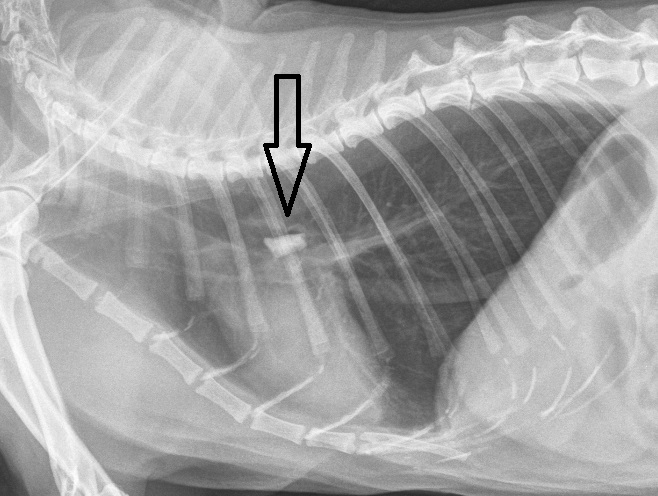 A cat who had large stone firmly lodged in his trachea and was struggling to breathe has made a full recovery following surgery. The stone was almost bigger than the entrance to the cat’s airways and how it got there remains a mystery.

Chandler had briefly gone AWOL two weeks previously. When he finally came home his owner noticed that he was wheezing and his respiratory function was deteriorating. Radiographs taken at Chandler’s primary care veterinary practice identified a foreign body at the distal trachea and the cat was referred as an emergency to Internal Medicine Specialist Dr Mark Goodfellow at Davies Veterinary Specialists.

On presentation at Davies Chandler was tachypnoeic, dyspnoeic and wheezing. Endoscopic evaluation of the trachea identified inflammation and the presence of a foreign body just cranial to the carina. It was firmly lodged within the trachea surrounded by granulation tissue. Despite multiple efforts it proved impossible to retrieve it.

Surgery was the only remaining option, so Mark referred Chandler to his colleague; Soft Tissue Surgeon Smita Das.

Smita performed a right 4th intercostal thoracotomy under total intravenous anaesthesia. The caudal thoracic trachea immediately cranial to the carina was identified and isolated. A tracheotomy was performed 0.5cm cranial to the carina for retrieval of the foreign body which was confirmed to be a stone. The trachea was suctioned, the tracheotomy site was apposed and leak tested, and the thoracotomy site apposed after placement of a chest drain.

Smita said: “We were very surprised at the size of the stone at approximately 1cm in diameter which is larger than the average feline rima glottis!  We will never know how it came to become lodged in the trachea but suspect accidental inhalation by freak accident. Given the amount of granulation around the site it is likely the stone had been lodged for a while. The proliferation of granulation tissue resulted in narrowing of the tracheal lumen and the subsequent dyspnoea for which Chandler presented to us.”

Chandler recovered smoothly and his chest drain was removed 24 hours later. He quickly regained his appetite and was discharged home four days later. So far there has been no further report of respiratory issues, and certainly no more accidental stone-inhalation!