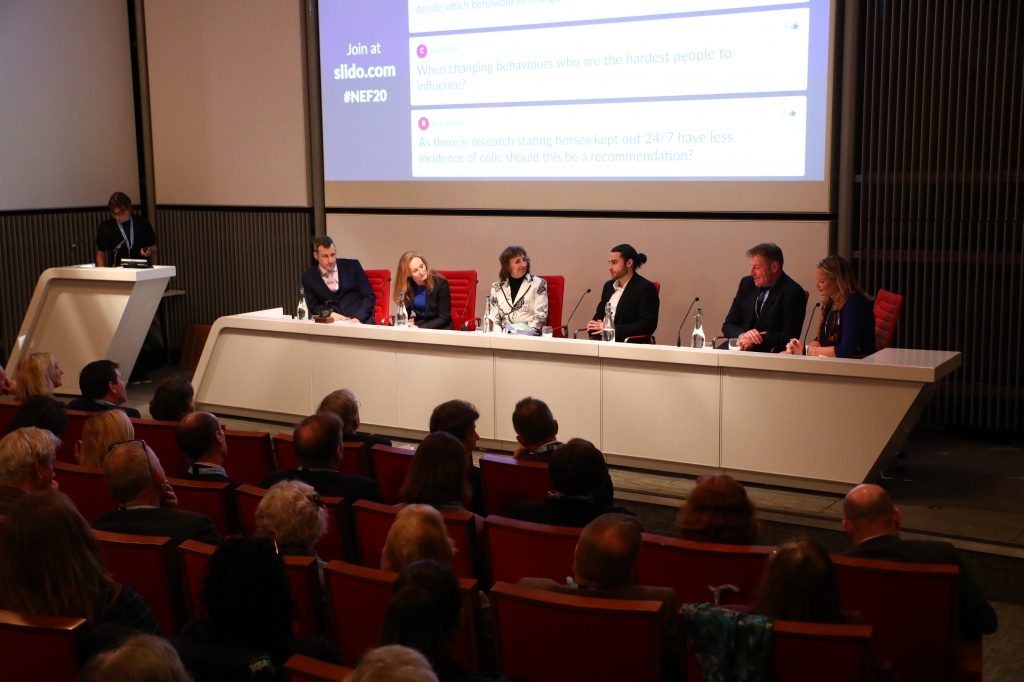 Veterinary, equestrian and behavioural change experts at the National Equine Forum 5 March 2020 agreed that changing human behaviour is key to improving equine welfare. In a session entitled Improving equine health and welfare by changing our behaviour they discussed the importance of human behaviour change (HBC) in relation to disease prevention and control.

Zac Baynham-Herd, associate advisor of the Behavioural Insights Team introduced the session by explaining some of the barriers to change. He explained how we don't just make decisions based upon information and intentions, but instead how the physical environment and immediate context unconsciously shapes our decision-making. He described how humans make decisions using either using our fast automatic system such as when an experienced rider rides without really thinking about it or a slow reflective system like first learning to ride and having to think about every movement you make. He explained how marketers have been using these insights for years, but that we can also use these insights to promote positive social change within equestrianism.

He outlined the common barriers to behaviour change, including our capacity to act (what we know, what we can do physically), our opportunity to act (what our social connections are doing, what is possible in our given context), and our motivation (such as incentives, trade-offs and habits). He then described the ways to make behaviour change more achievable - using the EAST framework which describes how to make behaviours easier, attractive, social and timely.

Sarah Freeman, Professor of Veterinary Surgery at the University of Nottingham discussed how the REACT colic campaign is working to make a difference to owner responses to colic risks.

The REACT campaign was developed by The British Horse Society and the University of Nottingham, based on research funded by World Horse Welfare and the University of Nottingham. The campaign has focused on how cases of colic can be recognised and responded to rapidly and appropriately. This has included the ‘REACT now to beat colic’ owner campaign and resources for vets on triaging colic telephone calls, primary assessment of colic and critical decision-making. Colic Awareness week in 2019 reached over 600,000 people, and the Colic Champions Vet Practice scheme currently has 68 vet practices signed up. The progress and impact of the campaign has been evaluated through behaviour change surveys, and the results of these are being used to modify and adapt the campaign. Planned changes include new social media campaigns, continuing to work with vet practices and developing information and case studies to help change social pressure and enable owners to make informed emergency plans for their horse.

David Rendle council member of the British Equine Veterinary Association and Equine Internal Medicine Specialist went on to discuss behaviour change and its potential impact on worming compliance. He explained that the relationship between horses and their parasites is at risk of turning full circle as treatments for equine parasites cease to be effective. 50 years of indiscriminate use of anthelmintics has selected for parasites that are able to evade the actions of the drugs that are available currently. Human behaviour drives the management systems that result in parasite-related disease and dictates the manner in which anthelmintics have historically been used. “Will changing human behaviour avert the potential equine welfare crisis that will inevitably ensue if anthelmintics are rendered useless?” he asked, concluding that we are about to find out.

Jude Matthews, chief executive of British Eventing (BE) then introduced Andrew and Abigail Turnbull of Richmond Equestrian Centre (REC) who had to manage a case of bacterial strangles on their yard in the summer of 2019 three weeks before they were due to hold a BE Horse Trials. The unavoidable cancellation of the event together with the loss of other events associated with it had a devastating impact on the centre and resulted in a massive loss of income.

With Andrew and Abigail’s tireless work and strict biosecurity and the exceptional cooperation of their livery clients Richmond Equestrian Centre was able to reopen less than eight weeks later. Just five out of the 30 horses on the yard were affected and all made a full recovery. REC found Redwings Horse Sanctuary's Stamp Out Strangles campaign during the outbreak and used their Pledge to help raise awareness and change behaviours in their area. Campaign information from Redwings as well as The British Horse Society, the Premium Assured Strangle Scheme and other professional organisations was also invaluable and Andrew and Abigail continue to use this campaign to turn an unwanted situation into an opportunity for positive change.

The NEF unites diverse elements of the equestrian industry for friendly, non-partisan debate each year. The aim is to inform, educate and help the industry to speak with the strength of one voice on topical matters affecting the current and future management and wellbeing of the horse. It is organised by a committee of volunteers representing various sectors of the equestrian industry and has as its President HRH The Princess Royal.

This year’s NEF programme covered a breadth of important, educational and practical presentations from governmental, veterinary and charity and equestrian leaders. For further information on the NEF and to view past presentations visit https://www.nationalequineforum.com.