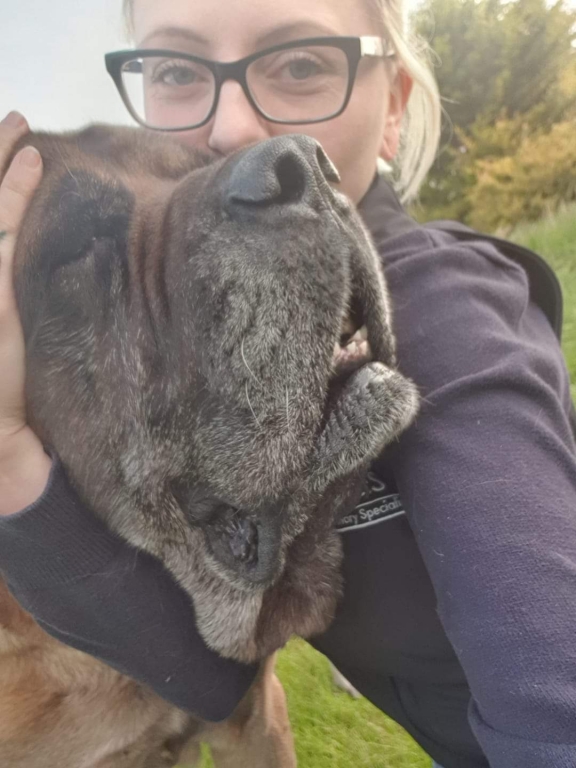 Members of the team at Davies Veterinary Specialists (Davies) in Hertfordshire are proudly getting behind Change a Pet’s Life Day (24th January 2022); they are sharing some beautiful personal stories about how they have changed an animal’s life for the better and how animals have enhanced their lives too.

They hope it will help to encourage people to help pets in need by adopting or fostering a pet, volunteering at a rescue centre or making a donation to a rescue charity.

Urszula Rzeszuteka, Medicine Intern at Davies, found her beloved cat Krysia while working as a vet at the Celia Hammond Trust, where she still does regular voluntary work.

Krysia was found on the street, virtually bald and with sore and ulcerated skin, caused by a very rare skin disease. She needed regular medicated baths, ear treatments, several different types of medications and a special diet.

“I felt really sorry for her being poorly in a hospital kennel for such a long time and decided to foster her at home until she fully recovered and was ready for adoption,” said Urszula. “She settled in the same day and decided to claim our flat as her own. She chose us but now we are very grateful that she did and can’t imagine our lives without her.

“Krysia helped me to become a better vet. Her condition was not responding to any of the available medications. As a charity, we could not afford a referral to a specialist. Hence, I had to do extensive dermatology research which gave me knowledge I would otherwise not have had. It was the beginning of my veterinary career and allowed me to understand the importance of the evidence-based medicine in my clinical practice. It is all thanks to Krysia that I use this approach with every case I treat.”

Kate Wright who is a Diagnostic Technician at Davies says her disabled dog Emmie stole her heart the moment she saw her. She had been dumped in a plastic bag, emaciated and with a deformed spine and front legs.

“I knew from the moment I saw her she would never leave me. She’s just turned four and despite her disabilities is a very healthy and content girl. She comes for walks with my other two dogs, although she has to be carried much of the way and I made her a set of steps so she could get on and off the sofa. She’s always happy and certainly enjoys life, she is also the boss of my other two even though she’s the smallest! She’s a miracle and an inspiration.”

Sophie Barnes, Flexi Supervisor at Davies, adopted Luna from Dogs Trust four years ago when she was 18 months old. She had in and out of the Trust in a variety of homes before she found her perfect match in Sophie.

“Luna clearly faced some challenges prior to us adopting her and we have had to do lots of training with her,” said Sophie. “She now lives a very happy life to include snoozing on the sofa after longs walks and she particularly enjoys going to the beach. She’s a dog with a big heart and lots of love to give.”

Monika Kafno, Client Care Administrator at Davies adopted an 11-year-old Mastiff, Walter. She took him on when he was in extremely poor condition and no longer wanted by his owner. Neglected and abused, he had developed multiple health problems including eye ulcers and an ear infection, skin ulcers and a fungal skin infection. He also had a large growth on his hock which was later diagnosed as a soft tissue sarcoma. Monika was able to take Walter to work with her every day and Davies were very supportive with his care but sadly, as his condition worsened, Monika had to make the heart-breaking decision to have him put to sleep.

“He was the most forgiving dog I ever came across despite the abuse and neglect he experienced,” said Monika. “It was humbling to see how much love and trust he had to give and I am grateful that I had the opportunity to show him the love, care and compassion he deserved, in his twilight years. He has had massive impact on my life - he taught me not to give up and be the person I am and love dogs the way I do. He enriched my life with fond memories of happy days that I spent with him.”

Hannah Dee who is a Wards RVN at Davies has six ferrets, five of which are rescued. Two were abandoned in a London park during lockdown and she took on three from the RSPCA. She also has Thor a German Shepherd, Lily a cocker spaniel and a cat named Phoebe.

Hannah says: “Ferrets are fascinating pets. They are very social animals but sleep for up to 20 hours per day which is why when they are awake and playing they are so energetic and lively. When they are excited they jump sideways which is called a weasel war dance. The noise they make when happy or excited is called dooking!“

Tim Richardson, Managing Director of Davies said: “It is fabulous to hear such moving stories of how members of our team have changed pets’ lives. The love, care and compassion they show for their own pets is truly reflected in the wonderful work they do at Davies.”

To find out more about how you can Change a Pet’s Life visit https://dogtime.com/national-day/47563-change-a-pets-life-day-january-24th-dogs#1

To find out more about Davies visit their website .

Multidisciplinary Referral Nurse needed in Bristol Up to £31kpa

Bristol. United Kingdom
My client in Bristol is looking for a Multidisciplinary Referral Nurse to join their friendly nursing team on a full-time basis. This is a f...

Referral Ophthalmic Nurse needed in Bristol up to £31k

Bristol. United Kingdom
An exciting opportunity has arisen for a Referral Ophthalmic Nurse to join a friendly and supportive team in Bristol. Referral nurse to...

Devon. United Kingdom
A unique and exciting opportunity has arisen for an Equine Intern at a recently opened referral practice in Devon. This is a 12 month contac...

Bristol. United Kingdom
We are looking for a Multidisciplinary Referral Vet Nurse to join a friendly nursing team at our client’s practice in Bristol.This is a fa...