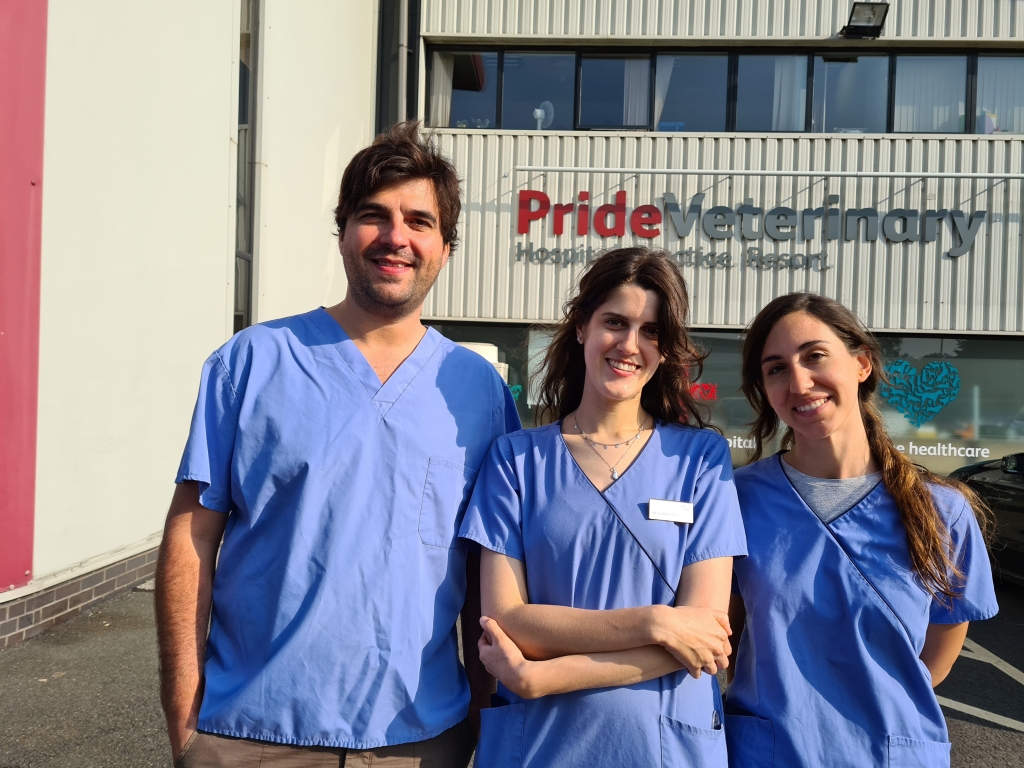 Ella, a 7-month-old female crossbreed pup, was recently referred to the neurology department at Pride Veterinary Centre Referrals in Derby, part of the IVC Evidensia Referrals Network. She was experiencing episodes where she collapsed with stiffness in her neck and developed trouble walking.

She had not had a great start in life, finding herself in a rescue centre in the Galicia region of the north of Spain. A charity brought her to the UK and she was with a foster family until a forever home could be found for her. It was while she was with her foster family that her collapsing episodes were noticed.

She had a total of three episodes over a few months, always when she was excited or walking. She would lose her balance, her neck would stiffen and she wouldn’t be able to walk. Although she recovered after about 30 minutes, she would then be quiet for the rest of the day. She was definitely a poorly puppy, not able to walk, run and play as a normal 7-month old.

Patricia Álvarez, a neurology resident at Pride, examined Ella on referral. She had a weakness in all four limbs and virtually no paw placement response, with the weakness more pronounced on her left side. She was reluctant to move her head, preferring to follow whatever she was watching with her eyes only, and she showed a painful response when her neck was gently manipulated. Her proprioceptive responses were quite reduced in all four limbs, again worse on her left side and in her back legs.

Patricia arranged for cervical radiography to help make a diagnosis and discovered that Ella’s cervical vertebrae had not developed so the alignment of her spine wasn’t correct. As she gently moved her neck the C1-C2 joint were trapping her spinal cord, causing her to collapse. She had a malformed C2 vertebra (missing odontoid process) and also had a curvature of the spine at C2-C3 possibly resulting from missing or weakened ligaments. She had been born with a wonky spine that was damaging her spinal cord as she was moving around.

Once Patricia had her diagnosis confirmed by Irene Espadas, Pride’s Referral Veterinary Neurologist, Ella had her neck splinted to keep it straight and to make sure no further damage would be caused. Irene said,

“When a first opinion vet is presented with a case like this, it’s not easy to pinpoint the problem so, it is important to keep referral in mind. The sooner the patient's neck is stabilized, the better. The degree of recovery from cases such as these is dependent on how quickly the issue is diagnosed so further spinal cord damage does not occur.”

It was agreed that surgery would be needed to stabilise Ella’s vertebrae and stop any further damage. This would involve implants to replace the missing or weakened ligaments.

Felipe de Vicente, Specialist in Small Animal Surgery, was called upon to help with the surgery, using a CT scan of Ella’s spine to plan where the implants were needed.

The surgery was a success and Ella will be able to run and play, without collapsing or any neck pain, after she had healed from the surgery. Due to the extensive vertebral stabilization (C1-C2-C3) she will always experience some stiffness in her neck but it won’t impede on her life and would remain pain fee. Patricia said,

“She will always be a little bit of a wonky puppy when she runs, which is to be expected after the concurrent injuries she had suffered over a few months but, she will live a pain free, happy, healthy life.”