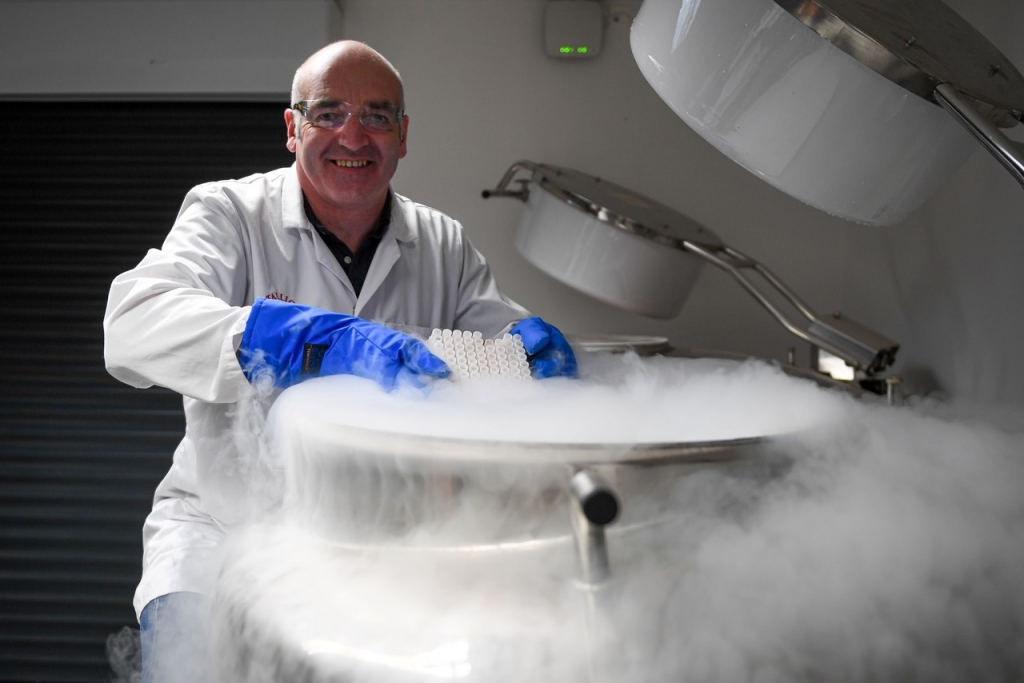 Cutting edge equine reproduction technology has led to the foundation of a ground-breaking charity for endangered species preservation, Nature’s SAFE.

Nature’s SAFE, Europe’s first Living Biobank dedicated to preserving endangered animals has been launched with the mission to save animals from extinction, by harnessing regeneration and reproductive technologies developed via domestic animal breeding.

Nature’s SAFE, a registered charity, will process and store live skin and reproductive cells and tissues from endangered species, that can be used to facilitate animal regeneration and species restoration.

“We are in the 6th mass extinction; the largest predicted loss of living biodiversity in 65 million years. said Tullis Matson, Founder and Chairperson of Nature’s SAFE and owner and managing director of Stallion AI Services, a UK based centre of excellence for equine reproduction.  “More than one million of the World’s species are threatened with extinction; largely as a result of the actions of humanity.”

With the state of nature’s continual decline, Tullis realised that techniques developed for the equine industry could be adapted for use in conservation by storing live cells from endangered animal species. This led to the foundation of Nature’s SAFE as a means of safely storing vital genetic samples that would otherwise be lost forever.

Nature’s SAFE is working in collaboration with Chester Zoo and The Rhino Fertility Project at the University of Oxford and is supported by the European Association of Zoos and Aquaria (EAZA) Biobank.

The charity uses a specialised cryopreservation media to indefinitely store live skin cells from threatened species. Following a specialised processing technique, the skin cells are frozen at a temperature of -196 degrees Celsius, at which point they are preserved in a dormant state and can be kept indefinitely. When thawed, the cells retain their ability to ‘wake up’ and regenerate, so enabling their use in animal artificial reproduction programmes. Nature’s SAFE will also store ovarian and testicular tissue from endangered animals. Additional plans include the development of techniques to generate sperm and egg cells from reproductive tissue.

“To be able to use 30 years of experience in equine reproduction and equine rare breed preservation for an even greater good is a real privilege,” said Tullis. It is an honour to be working with some of the world’s most endangered species and knowing that we are saving such important animals is indescribable.”

“The work undertaken by Nature’s SAFE is essential and timely,” said Professor Philippe Wilson, Professor of Animal Science and Bioinformatics, and One Health Medical Technologies at Nottingham Trent University. “The recent report from the United Nations highlights the dramatic lack of progress towards the Aichi targets by many countries and serves to reinstate the absolute requirement to cryopreserve material from our most vulnerable species. “In order to do this, we need a defined programme of collections, built into a robust framework for conservation; a proposition that only Nature’s SAFE is offering. I foresee the vision and ambition of the charity, placing it at the forefront of future international conservation efforts.”

Nature’s SAFE aims to cryopreserve reproductive cells and cell lines from at least 50 different animals from each species at risk of extinction to ensure species survival into the future.

Dr Sue Walker, Nature’s SAFE Co-Founder and Vice Chair, Head of Science at Chester Zoo, Chair of the EAZA Reproductive Management Group and Board Member of the EAZA Biobank said: “The research and technical skills Nature’s SAFE offers is incredibly valuable to global zoo associations whose mission is to conserve biodiversity through sustainable population management. The cryopreservation of reproductive cells and cell lines will be an important tool for population breeding programmes and the restoration of genetic diversity in animal species threatened with extinction. Having a facility solely dedicated to preserving these samples, Nature’s SAFE is a vital tool missing from the European zoo conservation toolbox.”

Working with their partners within the national zoo association, Nature’s SAFE has already successfully stored live cells from a number of endangered species including the Black Rhino, Asian Elephant, Eastern Bongo and Javan Green Magpie, with very promising post-thaw results.

“The potential for living biobank cells to contribute to global biodiversity conservation is immense but deciding which species to sample and why are critical to the effectiveness of biobanking efforts,” said Dr Andrew Mooney (BA Hons, PhD), a researcher at Trinity College Dublin who has been working on how to prioritise species for future biobanking efforts. “Considering not only the current threat level of a species, but also their evolutionary value, their vulnerability to climate change and the availability of samples from zoos and aquariums, can help to identify the species which can benefit the most from biobanking and which are the most likely to be successful.”

“Here at Ol Pejeta Conservancy we are at the forefront of conservation, with the last two remaining Northern White Rhinos on the planet resident on our conservancy,” said Richard Vigne, CEO of Ol Pejeta Conservancy. “We recognise the importance of new technologies to help prevent threatened wildlife from becoming extinct. In our view, Nature’s SAFE plays a crucial role in the global preservation of threatened species. The technology they can provide is one of the missing links in helping protect the biodiversity of our planet.”

“After many years of hard work and planning, we are honoured to announce the launch of Nature’s SAFE. We are very thankful to everyone who has helped us get to this point, but this is just the beginning and we know the real hard work is yet to come. Nature’s SAFE is just one small part of the larger puzzle to prevent biodiversity loss, but we truly believe we can make a huge difference to worldwide efforts to fight extinction,” concluded Tullis.