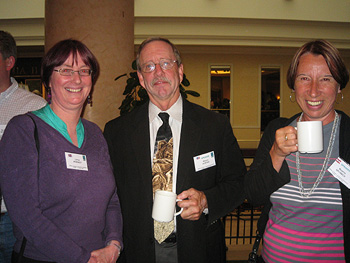 (From left to right) Lorna Kennedy, a delegate at the second Merial European Vaccinology Symposium, held recently in Prague, with speakers Prof. Steve Austad, University of Texas Health Science Center, USA, and Prof. Beatrix Grubeck-Loebenstein, Austrian Academy of Sciences, Innsbruck. A first for comparative science as experts from human and veterinary medicine gather to discuss ageing and the immune system, at the Merial European Vaccinology Symposium. An exceptional comparative symposium, the Merial European Vaccinology Symposium, has been held in Prague. The event, which took place from May 13-15, 2009, saw experts from human and veterinary medicine meet to discuss advances and crossover science in the study of ageing and the immune system. The theme of the symposium was ‘Vaccination Challenges in Ageing Populations’ and a multidisciplinary panel of renowned speakers, from across the US, Canada and Europe, explored the field through sociology, immunology, epidemiology, evolutionary biology and vaccinology. The three-day symposium, held at the Marriott Conference Center, was divided into four main sessions. In the first session speakers S. Jay Olshanksy, Professor at the School of Public Health, University of Illinois, Chicago, US, and Steve Austad, Professor of Cellular and Structural Biology, University of Texas Health Science Center, US, gave an impressive overview of the science behind ageing in human and animal populations. Prof. Austad, in his talk ‘Methusaleh’s zoo: how nature provides us with clues for extending human healthspan’, revealed ongoing studies of the immune system in long-lived, non-human species. For example, animals such as the naked mole rat can live over 20 years in captivity in comparison to the domestic mouse, which has an average life span of 2-3 years. The differences between the two species on a molecular level, explained Prof. Austad, could give valuable information on ageing in humans. The second session of the symposium looked at immunosenesence, i.e., the gradual deterioration of immune system function brought on by age, in people and animals. Graham Pawelec, Professor of Experimental Immunology at the University of Tübingen, Germany, explored the issue from a human perspective whilst Michael Day, Professor of Veterinary Pathology, University of Bristol, UK, and David Horohov, Professor of Immunology at the MH Gluck Equine Research Center, University of Kentucky, US, discussed the dog and horse, respectively. The session revealed a number of important parallels between these animals and humans, mainly when looking at the crucial function of the thymus, as well as differences such as the potential role of infectious agents such as the human cytomegalovirus (HCMV). Donald Palmer, senior lecturer in immunology at the Royal Veterinary College, London, highlighted the fact that the more we age, the lower the output in functional T-cells from the thymus. This knowledge outlines the importance for individuals to be properly vaccinated in young life, in order to be better protected from infectious disease in old age. Session three, which looked at the rationale for vaccination and information about duration of protection, included presentations from distinguished medical experts. These included: Peter Beverley, Principal Research Fellow at University of Oxford, UK, who spoke on immune memory and how to trigger an efficient long-term immune response; Richard Aspinall, Professor of Translational Medicine, Cranfield University, UK, who covered the challenges of vaccination in the elderly; and Beatrix Grubeck-Loebenstein, Director of the Institute for Biomedical Ageing Research at the Austrian Academy of Sciences, Innsbruck, on fading immunoprotection in elderly people. Ron Schultz, Professor and Chair, Department of Pathobiological Sciences, University of Wisconsin-Madison, US, looked at a similar topic with a veterinary angle; the evaluation of duration of immunity in animals. Discussion revealed that many of the challenges faced in the vaccination of ageing human populations have also been faced in the veterinary world. As an example, success stories in the veterinary world, such as the eradication of rinderpest, as well as in the medical world have been mostly related to diseases providing strong immunity, which doesn’t fade with age, or very little . Finally, the fourth session examined the practical consequences of ageing on vaccination strategies and policies. Here, speakers included Marian Horzinek, Former Professor at the Department of Infectious Diseases and Immunology Utrecht University, the Netherlands, and Joel Belmin, Head of Geriatric Medicine, Pierre & Marie Curie University (UPMC), Paris, France. In addition, Laurent Fischer, Merial R&DDiscovery, France, looked at the specificity of vaccination in the ageing individual and gave delegates a synopsis of emerging vaccination concepts entitled ‘From Preventive Vaccination to Therapeutic Vaccination’ which highlighted the company’s melanoma vaccine which is registered for use in dogs in the US. Delegates to the event – mostly leaders in their academic field – were invited from Spain, Germany, Scandinavia, Italy, France, the UK and Eastern & Central Europe. Prof. Michael Day, who helped organize the scientific programme together with Paul-Pierre Pastoret, Head of Publications at the OIE, and Jean-Christophe Thibault, who initiated the event for Merial, said: “I’ve been delighted by the quality of science at this meeting and I think Merial have done again a fantastic job of putting it on. Such events are valuable from the comparative side and this event is a prime example of veterinary and medicine working together and shows what we can learn from each other.” Dr Richard Aspinall was also impressed with the science on offer at the meeting. He commented: “Normally you come to a meeting and two or three days later you’re back in your office doing the same things that you did before: your trajectory hasn’t changed. This meeting has been different as it has knocked me off my trajectory and made me think again about what I’m doing. It has been very, very interesting.” The full proceedings from this Merial European Vaccinology Symposium will be available in an upcoming edition of the peer-reviewed publication Journal of Comparative Pathology. Abstracts of the conference are available upon request at Merial