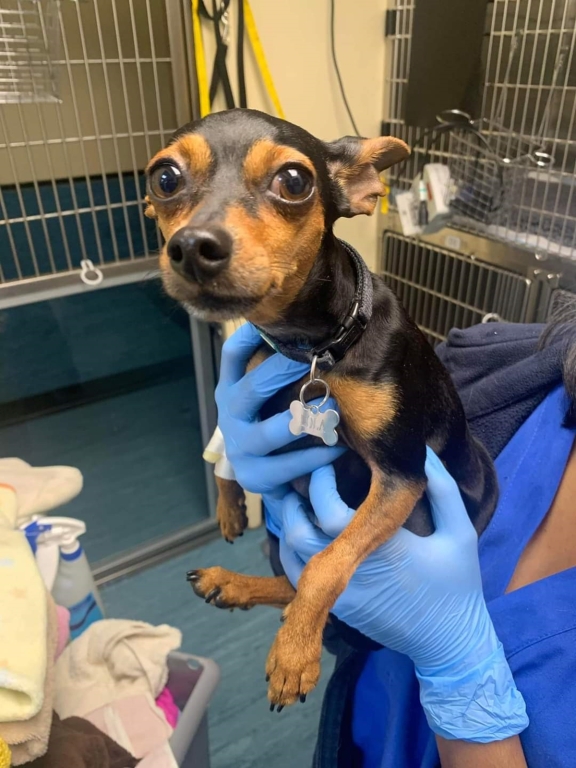 Lola, a three year old Miniature Pinscher, after her ordeal

Fire Service Comes To The Rescue Of Pet Pooch Lola

A pet pooch from Wolstanton found herself in a pickle when she got her leg stuck in the buckle of her car seat harnesses and had to be cut free by the fire service.

Lola, a three year old Miniature Pinscher, was taken to White Cross Vets on Wolstanton’s High Street following the freak incident and the team tried everything to remove it, before resorting to calling the local fire service to come to her rescue.

Holly Ravenhall, clinic director from White Cross Vets in Wolstanton, explained: “This was a very unusual case and something we’d never seen before, but dogs have a habit of surprising us and Lola is no exception!

“The buckle was completely stuck on her leg. We tried lubricating it and shaving the hair around it to create more space, but nothing was working. Because Lola is such a small dog, there was also a real risk that pulling it could break the fragile bones in that part of her leg, which would have led to a whole host of complications.

“In the end, it became clear that it needed to be cut off and that’s when we decided to call the fire service’s non-emergency number. They were fantastic and promptly turned up in a fire engine, with all the kit. We initially thought she’d have to go under a general anaesthetic for the procedure, but they had a tool that was perfect for the job, and they cut it off in a matter of minutes, with Lola staying calm throughout, much to everyone’s relief.”

Lola’s owner, Leighanne Harrison, said: “Lola gets very excited in the car and likes to stand up on the seat being nosey and looking out of the window, so we always use a safety harness, attached to the seatbelt, to keep her safe and secure.

“However, when we were taking it off, she somehow managed to put her leg through the buckle and it quickly became completely stuck. We knew we needed to get some help and decided to call White Cross Vets who we have been with since Lola was a puppy. They were fabulous but had to get the fire service involved because the buckle was metal and we’re extremely grateful that they were able to help.

“Thankfully Lola wasn’t traumatised by the incident and still loves her car journeys, but we now hold her paws when we’re taking the harness off to make sure it never happens again!”

White Cross Vets, which is part of IVC Evidensia, has been caring for pets for 80 years. Established in West Yorkshire in 1937 it now employs a 240 strong team across 22 practices in the UK.