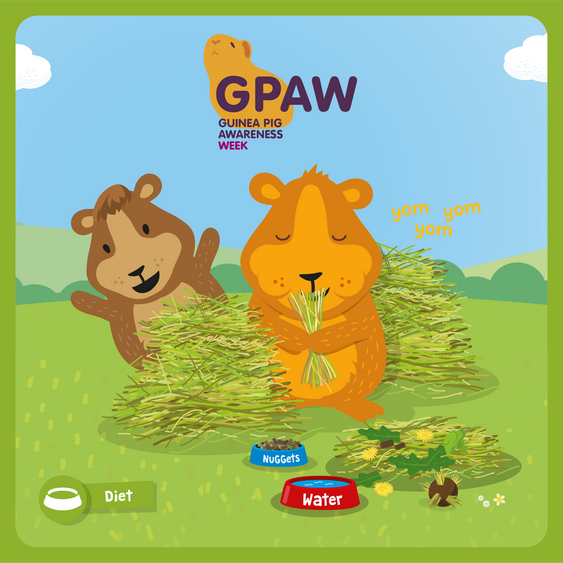 
The organisers and partners of Guinea Pig Awareness Week (GPAW) are delighted to announce the return of this important campaign for 2022, which takes place from 19-23 September. This year’s theme Home Squeak Home will focus on the importance of providing guinea pigs with the right environment, as well as touching on other key aspects of guinea pig care.

GPAW’s organisers are urging retailers to get behind the latest campaign by accessing free online resources including downloadable retail packs, to help them organise and promote their own digital events in support of this year’s campaign.

GPAW is organised by Burgess Pet Care alongside campaign partners the RSPCA, Woodgreen Pets Charity, Blue Cross and the PDSA. As the organisers of Rabbit Awareness Week (RAW), the UK’s largest and most successful welfare campaign for rabbits, Burgess and the GPAW partners are aiming to build a similar profile for GPAW, with the support of retailers, by educating and informing more guinea pig owners about their pets’ welfare needs than ever before.

Home Squeak Home intends to raise awareness of the specific housing needs of guinea pigs, which will be delivered through a variety of online content on the GPAW Facebook page, including educational videos, live streams, and Q&As from experts and veterinary professionals. The campaign content will also be shared digitally across the GPAW partners’ social media channels to help educate guinea pig owners and improve standards of guinea pig care in the UK.

“We are delighted to see the return of GPAW for a second year, which recognises the importance of ensuring that we provide essential care and support the wellbeing of the nation’s guinea pigs.

“Retailers were really supportive of the first GPAW last year and we’re hoping for an even better response for Home Squeak Home. The information within our digital GPAW packs will provide lots of ideas for retailers to get involved and raise their profile with customers in an engaging and friendly way.”

“Like rabbits, guinea pigs are often considered to be easy animals to care for, when in fact they have very specific welfare needs.

“When it comes to guinea pigs’ housing requirements, they need sufficient space to exercise and sit up. Enrichment is really important and being a prey species, they need lots of little hiding places in their exercise area.

“It would be fantastic to see as many retailers as possible getting involved in GPAW so that together we can engage, inform and educate guinea pig owners about their pets’ specific welfare needs and improve the lives of these gorgeous pets,” Dr Moyes added.

Retailers interested in getting involved in this year’s campaign can sign up to receive notification of when the GPAW packs are available to download here: - https://guineapigalliance.co.uk/gpaw-2022/