Croft, the region’s leading vet specialists, has been building the strength of their business through activity involving countries worldwide, in both signing patents and importing dog’s semen! 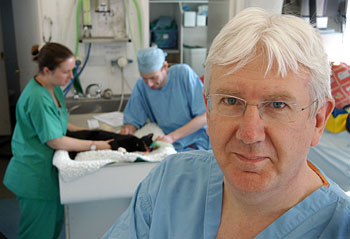 Co-owner Malcolm Ness Co-owner Malcolm Ness, has recently worked on the development of the world’s first canine total elbow joint replacement along with an American counterparts. A locking plate system (The SOP) has also been developed at Croft. SOP is implanted into dogs with broken bones, arthritis or serious injury, has grabbed the attention of vets worldwide. Malcolm has now just signed patents to cover Europe, USA, Japan, Canada, Mexico, South Africa, Indian and China. The implant kit is already being marketed across the USA and UK, with all US and UK vet schools having quickly bought into the new procedure. Malcolm said: “When we opened our first branch in Blyth in 1987 co-owner and wife Judith and I never imagined that we would have ten outlets across the region and be developing world wide procedures that we would own the patents to. We started out because of our love of animals, wanting to be the best vets with the best practices possible and we have never taken our eye off that. “Our new premises in Cramlington have now made us into the premier referral hospital in the north, if not the UK, and our equipment which includes a CT scan and state of the art operating theatres places us in the pole position to develop medicinal animal practice further.” Also in the practice Judith Joyce and Louise McClean are heading up a specialised canine fertility and reproduction service. As part of this service which includes pre-breeding testing, management of the bitch’s cycle, artificial insemination and management of pregnancy, Croft also runs a comprehensive semen collection service. Semen is being imported and exported as far away as Australia, to ensure the right quality for the breed is used. Louise said: “This service is something that we have been working towards for a long time, and now we have the first class facilities in the new state of the art hospital in Cramlington we are full steam ahead working with colleagues worldwide in a bid to be the premier canine reproduction service. “We have had a number of great successes. For example, semen imported from an outstandingly good dog in Norway was used with a champion British bitch - their pups are due any time now. By giving breeders access to the very best dogs worldwide we avoid the dangers of inbreeding and ensure healthier puppies.”