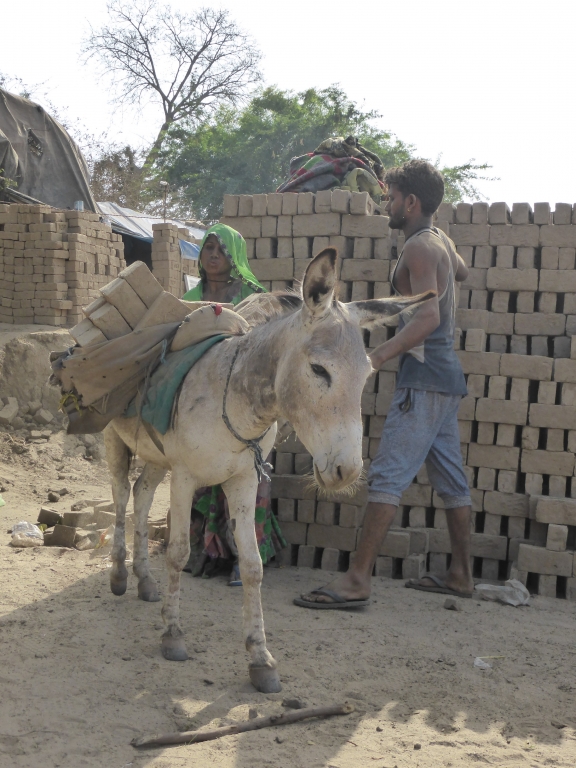 A research article by the world’s largest equine welfare charity, The Donkey Sanctuary, that highlights the link between the welfare of working equids and the wellbeing of their owners has received a significant endorsement through its acceptance by peer-reviewed scientific journal ‘Frontiers in Veterinary Science’.

The scientific paper, titled Cultural ‘blind spots,’ social influence and the welfare of working donkeys in brick kilns in northern India, was written by research staff at the international animal welfare charity. It calls upon a more holistic ‘one welfare’ approach to working equids in the brick kilns, particularly through the collaboration of NGOs with differing priorities to produce more sustainable long-term solutions.

Specifically focusing on working donkeys in the brick kilns of northern India, the article aims to highlight the lives of the poorest members of Indian society, describing how these equid owners often face issues such as limited opportunity, capacity, gender or socio-economic status, overriding their ability to care well for their own equids.

Tamlin Watson, Senior Researcher Global at The Donkey Sanctuary, and author of the paper explains: “Working equid welfare is inextricably intertwined with human caregivers. People, facing exploitation and in extreme poverty, have difficult decisions regarding how scant resources, both physical and economic, are apportioned.

“This article highlights the complexity of human lives in brick kilns in Northern India, how socio-economic influences drive practices affecting working equid welfare, and the need for collaboration to ameliorate welfare for both partners within the human-animal relationship.”

The scientific paper discusses culture, status, religion and social influences, including insights into the complexities of cultural ‘blind spots’, which often complicate efforts by NGOs to improve working donkey welfare when the influence of different cultural and societal pressures are not recognised or acknowledged.

Laura Kubasiewicz, Senior Researcher Global at The Donkey Sanctuary who contributed to the research paper said: “The welfare of working equids is undeniably linked to the wellbeing of their owners and their place in society. This article is key to help us understand how to reach people most effectively, to improve the lives of working equids and support the people that rely on them”

Head of Global Research at The Donkey Sanctuary, Zoe Raw who also contributed to the paper added: “The welfare of working animals is evidently influenced by the beliefs, knowledge and animal-care practices of the humans which use and care for them, yet there is very little evidence available. This piece of work is an important step forward in understanding how human practices, socio-economic and religious contexts can influence the welfare of the animals they own and use.”

Zoe concluded: “This publication contributes to the emerging understanding that human-behaviour change is a critical component to influencing and improving animal welfare, and provides some key areas in which further work should be developed”.

Frontiers was founded by scientists to make peer-review constructive, and to ensure that active researchers within a field have the opportunity to shape the direction of science.

The journals are available through open access, ensuring the research carried out by The Donkey Sanctuary can be accessed by the general public, as well as the scientific community. The article is available here

The Donkey Sanctuary is a global leader for equine welfare, research and veterinary care. The charity operates programmes worldwide for animals working in agriculture, industry and transportation.

More from The Donkey Sanctuary