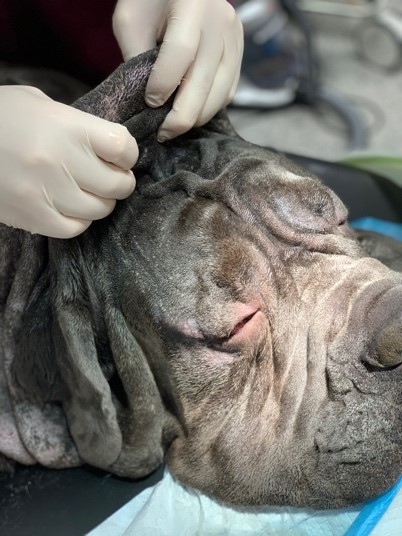 Clinicians at one of the UK’s leading small animal referral hospitals have combined to cut away more than a kilogram of excess skin during an intricate facelift operation on a dog.

Neo, a 150lb Neapolitan Mastiff, was admitted to Eastcott Veterinary Referrals, in Swindon, Wiltshire, in obvious pain and struggling to see after being plagued with sagging eyes, inward and outward turning eyelids and huge skin folds on his head and face.

Ida Gilbert, head of ophthalmology at Eastcott, which is part of Linnaeus, headed up the urgent case during the height of lockdown and combined with specialist soft tissue surgeon Andy Phillips and fellow ophthalmologist Dave Johnson.

Ida, an advance practitioner in veterinary ophthalmology, said: “Neo was clearly struggling, so was considered to be an urgent case and prioritised for surgery.

“His vision was poor due to his eyelid conformation and extremely heavy facial folds. He had also developed very sore eyes due to the irritation from his condition.

“This irritation had caused Neo to rub his eyes repeatedly and he had also become anxious about anyone attempting to handle around his eyes and face, which made the application of eye drops nearly impossible for his owners.

“A full investigation revealed the left cornea had established vascularisation to the centre and fibrosis laterally para-centrally from recent ulcerative keratitis.

“He had extreme macropalpebral fissure, with a double kink in the left upper eyelid and single in the right. There was lower eyelid ectropion with medial and lateral entropion.

“He had extreme laxity of the skin on the head, facial droop and heavy, large jowels, creating further weight and drag on the eyelids.

“The periocular skin was erythematous and swollen from chronic epiphora and rubbing.”

Ida and her Eastcott colleagues joined forces to maximise speed and expertise for such an extensive operation, allowing the trio to operate on both eyelids, while also completing the facelift to minimise the time Neo had to be anaesthetised.

Andrew said: “A large coronal rhytidectomy was performed caudal to the ears, removing 1,050g of skin.

“Cranial margin was over the mid-frontal sinus. A large elipse was excised, ending at the level of and ventral to the wing of the atlas.

“The skin was anchored to the fascia of the temporalis muscle and the periosteum of the occipital crest for the midline suture.

"Neo also had a shortening of his eyelids by 15mm and entropion and ectropion surgery of the upper and lower eyelids.

“He then stayed in the hospital with us overnight for careful monitoring of his recovery and provision of good pain relief.

“Everything went well and it has given Neo a new lease of life and opened his eyes again to the world around him.

“He has healed very nicely and his owners report that he is a much happier dog as a result of the surgery.”