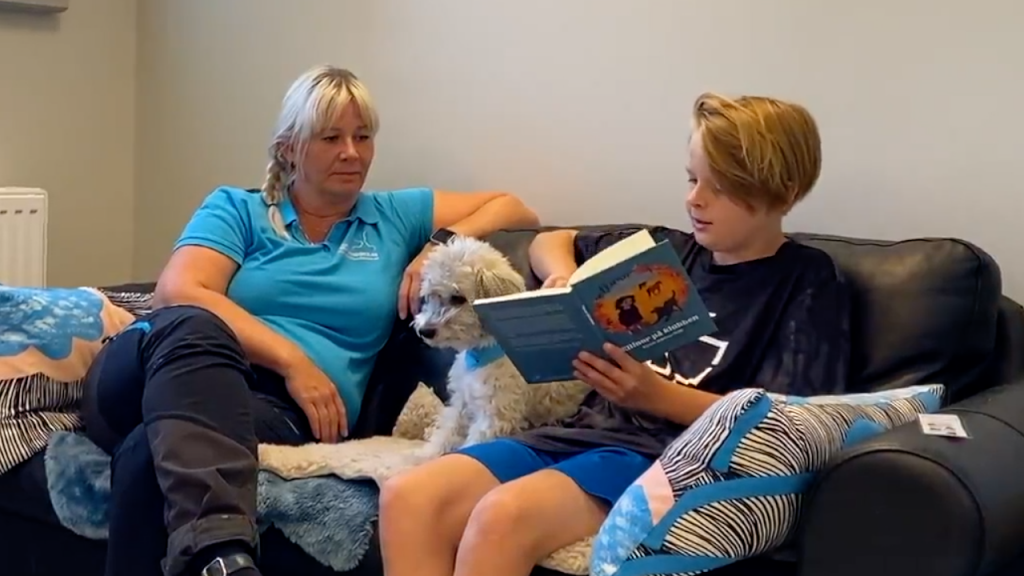 A new study in Sweden has highlighted the positive mental health and economic benefits of animal assisted programmes with school pupils who face a series of challenges including autism and bullying.

The study, which was supported by Ceva Animal Health, was launched at the prestigious Uppsala Health Summit in Sweden (18 - 21 October).  Seventy Swedish teachers from schools where animals, mainly dogs, had been used in sessions with pupils, completed questionnaires as part of the research project.  They highlighted the fact that not only did the mental health of pupils benefit from taking part in the sessions, but the interventions often reduced absences from school and improved a child’s academic performance.

In economic terms, this meant a reduction in funds required for extra teaching staff in schools.  The impact on academic performance also improved future employment prospects, reducing the pressure on social financing from State authorities and helping to avoid the costs of dealing with the increased likelihood of involvement in crime for young people facing lifelong unemployment.

The study, ‘Mapping of social working dog teams in Sweden’, by therapy dog trainer and practitioner Matilda Ström and Professor Lena Lidfors of the Department of Animal Environment and Health, Swedish University of Agricultural Sciences, was presented at a workshop during the Uppsala Summit which, this year, explored the theme of ‘Pathways to Lifelong Mental Wellbeing’.

Animal assisted programmes in Sweden had been increasing but pressure on education and health authority budgets has seen a number of them closed down.  A series of recent international research papers have been published, notably in Australia ¹ and the Netherlands ² demonstrating the positive behavioural improvements seen by children and their families as a result of regular involvement in sessions involving animals.

“We asked everyone who was sent a questionnaire whether they had success when interacting with dogs in school and everyone said ‘yes’, no-one answered ‘no’,” said Professor Lidfors. “The health economic benefits are that pupils can end school with approved grades so they can get higher education and a job.”

Figures³ show that training a social therapy dog in Sweden costs around €3000, but costs to schools are low because handlers often work for minimal or sometimes no fee.

Meanwhile, the social cost of a one-year delay in a person entering the workforce is estimated at €50,000⁴ and if an individual is excluded from work during their whole lifetime, the cost to the State would be over €1 million.

Sara Karlberg, the CEO of the Swedish Therapy Dog School, who presented at the Uppsala Health Summit workshop, said: “We have the evidence to show that the therapy helps the children to reach their goals in school, which in the long term means they can provide for themselves when they grow up.”

Laura Hartman, the Chief Sustainability Officer with Uppsala Municipality said she hoped the workshop would give ‘new energy’ to the discussion on animal assisted programmes in Sweden’s schools and that she thought the workshop would encourage a national dialogue in Sweden on the issue.

Ceva supports a series of charities and initiatives which help children and adults with a range of disabilities.  These include the UK charity, Dogs for Good, which provides assistance dogs to adults and children with disabilities and autism, while its community dogs and their specialist handlers help people to improve their independence, wellbeing and skills. The Dogs for Good Family dog team also advises and supports families with autistic children to help them create a relationship that benefits both child and their own pet. Never has the human animal bond been more important than is these post pandemic times when the reliance on the assistance dog or family pet is at its peak.

The ability to ease lack of social interaction by these animals is undeniable, however it is the advice given by organisations like Dogs for Good that ensure the dogs are not overly stressed as their routines have been altered by the Covid crisis also.

“It is widely known that children and adults with autism have a special bond with dogs, which make a tremendous difference to confidence levels, while helping to reduce anxiety and improve communication,” comments Cünyet Seçkin, managing director of Ceva Animal Health UK and Ireland.  “We were, therefore, delighted to support the ‘Mapping of social working dog teams in Sweden’ study which further demonstrated the positive mental health and economic benefits of animal assisted programmes with school pupils who face a series of challenges such as autism and bullying.”