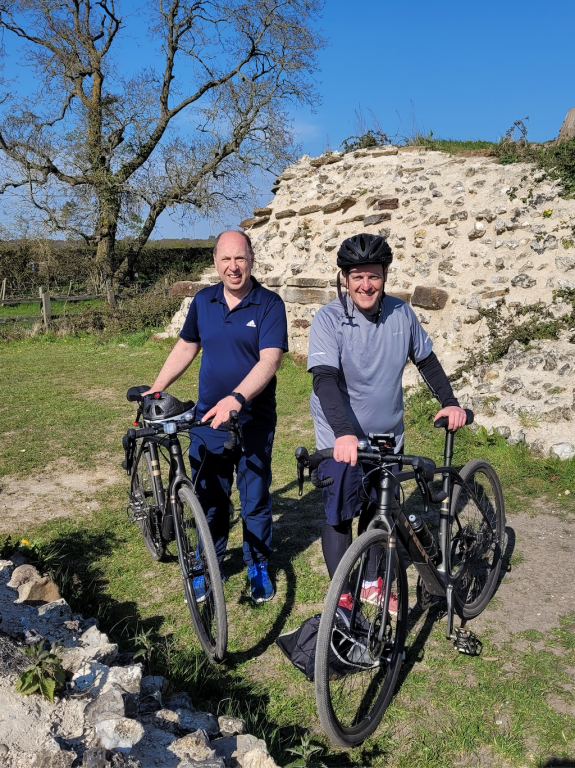 Directors Craig Griffiths and Lawrance Bresslaw of NSV the vet recruiter announced last month that they will be doing a charity cycle ride from London to Brighton in aid of Vetlife in September. I caught up with them last week to see how they have been getting on.

Lawrance explained that he has been practising hard with a bike trainer set up in the lounge of his house. Lawrance said “I prefer to train in the comfort of my living room in doors because it’s away from busy traffic and helps me to avoid the rain”.

Craig said, “my training has gone a bit better ha-ha”. Craig, living in one of the nicer areas of the country appreciates he has nicer routes to cycle to practice. He reported that last week he did 35 miles to which Lawrance humorously replied “I can just about manage 35 minutes”. Craig has been taking on extra training where possible and running 3 to 4 times a week and cycling once a week. Either way they are both absolutely dedicated to this cause and putting in every effort and we wish them both the best of luck.

You may remember from last month’s article that Lawrance and Craig were looking for as many people to get involved as possible whether that was joining them on their cycle ride or doing your own virtually. When I caught up with Lawrance and Craig they explained that they had a few people who had approached them with some interest in joining them on their cycle ride, but unfortunately there were no spaces left. Skyline the organisers of the fundraising event have put a limit on the amount of people able to sign up to the event. As a result, there seems to be no spaces left for anyone who may want to join Lawrance and Craig on their cycle ride. The issue is some of the larger charities taking part in the same fundraising event have prebooked numerous slots for people to join and ride for them. Craig said, “it will be disappointing if there are spaces left over for other charities that we could have used for our volunteers”. Lawrance has asked Skyline to allocate a few extra spaces so that other people may be able to join in their group, however Skyline have said they are unable to provide this. We therefore urge you to get involved by doing your own virtual bike ride and help raise money for Vetlife. In the meantime, Lawrence and Craig are hoping that Skyline may allocate a few spaces, should anybody withdraw.

The idea to do a cycle ride charity fundraiser came about last year when Lawrance met up with Craig after the country was released out of the first lock down in August during the eat out to help out scheme. Craig and Lawrance went out on a bike ride from Tavistock to Plymouth for a catch up and that is when the idea came about. Both decided “let’s see how far we can go” and along the way a thought occurred that they could do it for charity and relate it to their involvement within the veterinary industry. When I asked Craig and Lawrance why Vetlife and not an animal charity? Lawrance explained “there is lots of support for animal charities from the general public, we chose to do Vetlife as we want to support the people who help the animals, and we like the fact that we are helping the people we work with on daily basis”.

Craig’s partner is a vet nurse so he has seen first-hand the stress and pressures this job can put on the veterinary community.

With recent press release promoting the NOT ONE MORE VET on social media; this is even more reason to get behind this incredible cause. So many people came together to get the word about, changing profile pictures in honour of the NOMV organisation with the use of decorative frames. Why not take it a step further and join in or donate to this cause.

You can donate to Craig and Lawrance’s cause by going to their Just Giving page at https://www.justgiving.com/fundraising/thevetrecruiter

Or you can email Lawrance and Craig to get involved on lawrance@thevetrecruiter.co.uk

More from NSV - The Vet Recruiter