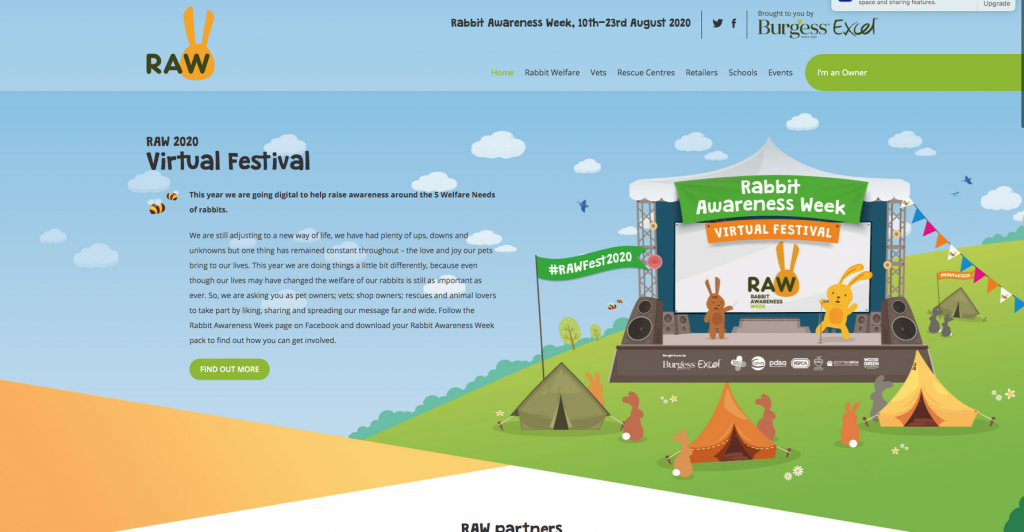 Research from the PDSA Animal Wellbeing (PAW) Report – the largest and most comprehensive report into the UK’s pets – has shown that 10 years of Rabbit Awareness Week (RAW) has had a profound, positive impact on the lives and welfare of pet rabbits in the UK.

The Report’s findings also indicate that rabbits are spending less time in their hutches - an average of 10.73 hours compared to 13.18 hours in 2017, over a 24-hour period.

Strikingly, since the first PAW Report was published in 2011, inappropriate diets for rabbits has remained one of the top five welfare concerns for veterinary professionals, and this year 90% said that rabbit muesli should be removed from sale.

“We are really encouraged by the key findings of the PDSA’s latest PAW Report, which reflect the dedication of the RAW partners who, for almost 15 years, have worked hard to improve the welfare of rabbits, which are still widely recognised as being one of the UK's most misunderstood animals.

“We are delighted to see that our RAW campaigns, including 'Move Away from Muesli' and the 'Protect and Prevent' vaccination initiative, are having a positive impact on the care of rabbits. It is particularly pleasing to see that over the last 10 years the number of rabbits being fed a muesli style diet as one of their main food types has decreased from 49% to 18%. The health risks associated with muesli style diets for rabbits is always a key message in our campaigns and will continue to be, as although we are going in the right direction, there are still a lot of rabbits being fed unsuitable diets.”

“The PAW Report provides important insight into the  health of the nation’s pet rabbits, which, in turn, can greatly assist the information that veterinary practices can provide to the general public.

“It’s often the case that rabbits are suffering not through neglect but through a lack of understanding among their owners, which is why campaigns like RAW continue to be vitally important, helping the UK’s rabbits to lead happy and healthy lives.”

“Since the first PAW Report was published 10 years ago, it’s clear to see that as a collective group we have made real strides in advancing the welfare of pet rabbits in the UK. By educating new and established owners about suitable diets, companionship, housing, preventive treatments and the importance of companionship, the UK’s rabbits’ five welfare needs are improving. Whilst these findings are positive, we need to continue to work hard to ensure that the UK’s pet rabbits receive the care they truly deserve, in line with PDSA’s vision of ‘a lifetime of wellbeing for every pet’.