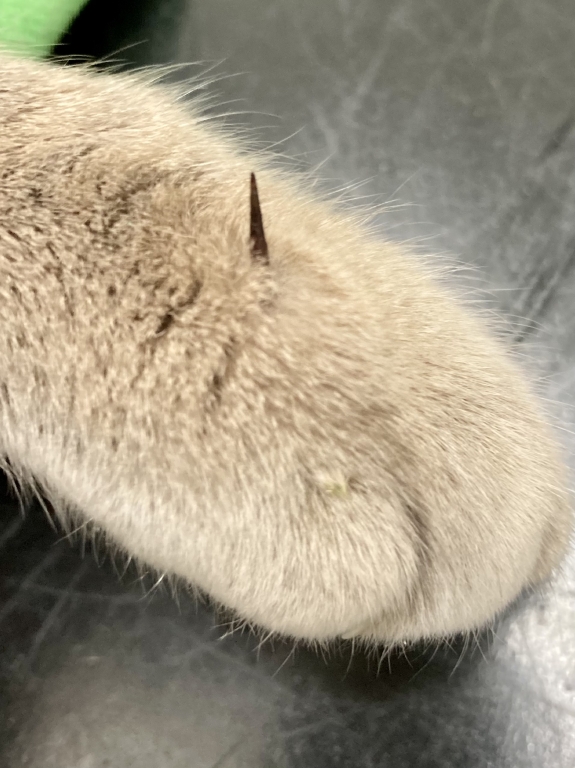 
A three-year-old cat called Yoda, from Maidstone, Kent felt the force of a 1.5-inch thorn, as it punctured straight through his right forepaw and came out the other side.

The sandy coloured pet cat, who was named after the Star Wars character because he had very flat ears and a tuft of fur in the middle of his head when he was a kitten, is owned by Julie King, who is a local foster carer.

She said: “Yoda was quite an ugly kitten really, and as soon as we saw his ears and tufty fur, we knew exactly what to call him! We got Yoda from my daughter’s friend, as the children I foster love having cats in the house, we have five in total. We also brought his brother, Willow, home at the same time, and they are inseparable.

“Yoda is a prolific hunter and is constantly in and out of the cat flap but then he also loves to cuddle up and relax in the sunshine in the conservatory. One morning just before school, one of the children was giving him a pet, when he felt something sharp in his paw. When he touched it, Yoda jumped up and ran off. I tried to take a look, but he wouldn’t let me touch it, so I knew I needed to take him straight to Pennard Vets to get him checked out properly.”

Vet, Sarla Balse, from Pennard Vets in Maidstone, said: “I have been a vet for 28 years and still find cases like this very satisfying to treat! There was a spike coming out of the top of Yoda’s paw and I could feel a small lump in the underside of his paw between his pads.

“On closer examination, it soon became clear that it was a substantial thorn measuring 1.5 inches long that had pierced straight through his paw. I grasped the bottom end of the thorn firmly with forceps and quickly removed it. Yoda was extremely brave throughout! We were all surprised when we saw just how big it was! We suspect he had jumped down and landed on the thorn, which was then forced right through his paw.

“Afterwards, we sent him home with some antibiotics and pain killers to rest and recover, and when we re-examined him ten days later his paw was fully healed. Cats are incredibly agile and curious, and often get into all kinds of scrapes as they explore. Julie told us this is the second time he has injured the same paw, as he trapped it in the cat flap when he was a kitten, so it’s obviously his unlucky paw!”

Julie added: “Sarla and the team at Pennard Vets did a great job. When I got him home, he relaxed on his back, in his favourite spot in the conservatory and had a good sleep. I was so relieved to see him up and about the next day and he was soon pawing at the cat flap in the morning to get out! He is such a loving cat; he loves a cuddle and can be picked up like a baby by any of the children, but as soon as he is out of the house, he is such an adventurer. Hopefully this will be the last time he hurts himself but I’m not holding my breath!”