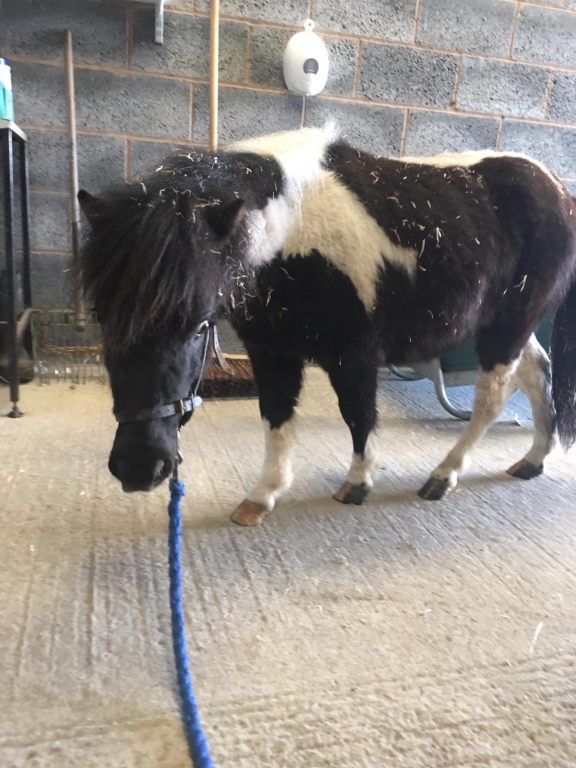 National pet charity Blue Cross is appealing for support from horse lovers to help fund a sick Shetland pony’s veterinary treatment. Little Timmy Tiptoes has been gravely ill with strangles and anaemia so the charity has set up a Just Giving page in the hope they can raise money for his ongoing care and the management of their horse centre in the face of a lengthy quarantine procedure https://www.justgiving.com/campaigns/charity/bluecrossanimal/timmy-tiptoes

Timmy was rescued by the RSPCA and taken in by Blue Cross last month at their Burford Centre in Oxfordshire. The bedraggled, emaciated and heartbreakingly dejected skewbald youngster who is just 90cm high was battling to survive.

Vicki Alford, Horse manager at Blue Cross Burford said: “On arrival Timmy was in a really sad state. He had over grown and curled up hooves, was riddled with lice and very underweight. The transporter who brought him to Burford described the place where he was found as horrific – apparently there was no food or water and they were stood in mud up to their tummies. How they survived is any one’s guess.”

Timmy spent four weeks in isolation which is standard procedure for the charity’s new intakes. Unfortunately, Timmy became increasingly unwell. He was examined by the centre’s local vet and was admitted to the practice as an emergency. He had severe nasal discharge and his temperature, at 41 degrees, was dangerously high. He was also anaemic which made it more difficult for his immune system to fight the infection. He was screened for strangles and both a blood test and a nasal swab proved positive.

Blue Cross immediately instigated their disease outbreak protocol at the Burford Centre to limit the spread of any further strangles outbreaks. The Horse Unit is in lock down with strict bio-security measures in place.

Vicki continued: “Timmy is now back at the Burford Centre and is much brighter. His temperature is back to normal and the nasal discharge has cleared but he’s not out of the woods yet.  He is in still in isolation, but we hope our stringent bio-security will have stopped an outbreak it in its tracks and that the Horse Unit will be up and running again soon.”

Managing a strangles outbreak comes at a high cost, given the rigorous safety measures that have to be undertaken. It costs:

£5 to disinfect a stable for each horse

£35 for a full quarantine suit for a groom

£37 For a strangles blood test (approximately 100 will be needed)

£47 for a nasal swab (approximately 20 will be needed)

If you would like to make a donation please visit https://www.justgiving.com/campaigns/charity/bluecrossanimal/timmy-tiptoes