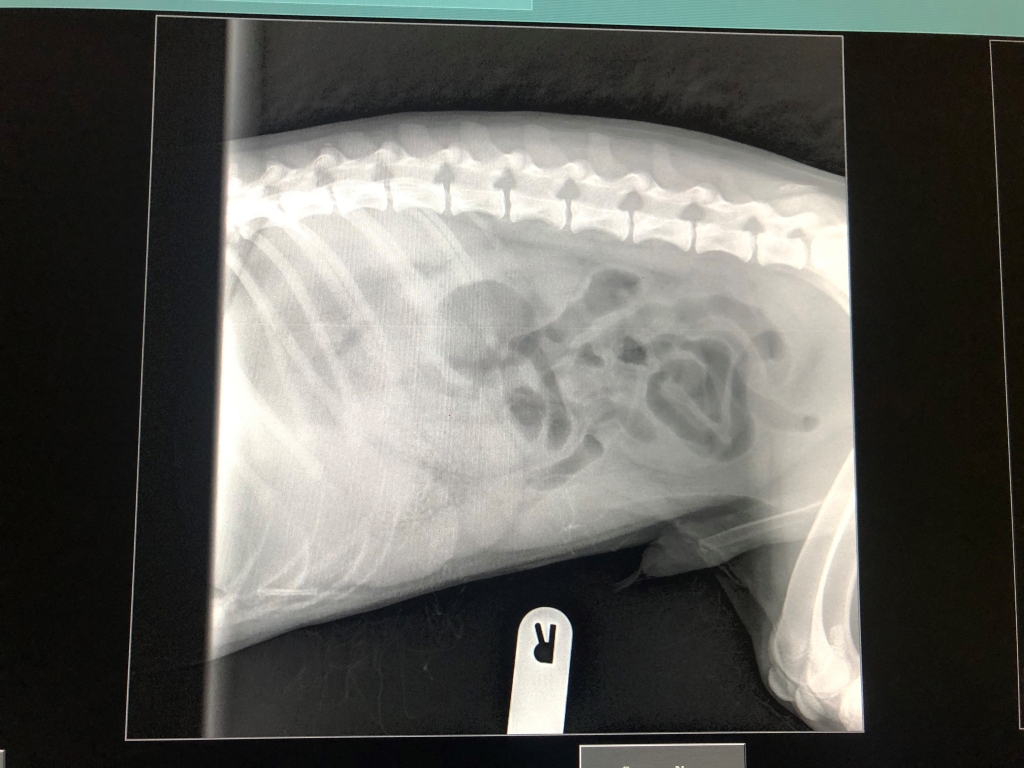 A mischievous puppy from Teesside had a lucky escape after he swallowed an entire, one metre long, dressing gown belt and had to undergo a major operation to remove it.

The seven-month-old cockerpoo, called Larry, had managed to eat the belt without his owners realising, but they rushed him to White Cross Vets on West Dyke Road Retail Park in Redcar, after he started vomiting, lost his appetite and didn’t want to go for walks.

An abdominal examination revealed a painful and grossly thickened gastrointestinal tract. White Cross Vets carried out an abdominal x-ray and ultrasound which showed an unusual, soft looking object, suggesting he had swallowed a foreign body. To make matters worse, there was also an intussusception, where a segment of intestine ‘telescopes’ inside another section, causing a severe blockage.

Louisa Graham, clinic director at White Cross Vets in Redcar, explained: “Everything suggested he had swallowed something he shouldn’t have, so we performed an exploratory laparotomy, which is a surgical incision into the abdominal cavity.

“It quickly became clear that Larry was in a very bad way. His bowel had severely intussuscepted causing reduced blood flow and the object had become twisted in his intestines. We had to untangle and straighten everything out, which is risky because intestines are very delicate and if they start leaking it can cause all types of problems.

“After the extensive operation, we stitched him back up before trying to work out exactly what is was that he’d swallowed. We were all absolutely stunned when we realised that what we had removed was a dressing gown belt that was about a metre long!

“There’s no doubt Larry had a lucky escape and thankfully he’s now making a great recovery.”

Larry’s owner, Liam Lynch, said: “Larry is full of mischief and we have to keep a close eye on him, but he must have found the dressing gown belt when our backs were turned. When he suddenly started being sick, and was off his food and exercise, it was really worrying because we had no idea what could be causing it.

“We couldn’t believe it when Louisa told us what he’d swallowed and I’m not sure how he managed to do it – it’s mind boggling!

“It’s brilliant that he’s recovered so quickly. After the operation we took him home with some pain relief and he immediately started eating again and within a few days he was back to his playful self, which is great to see.”