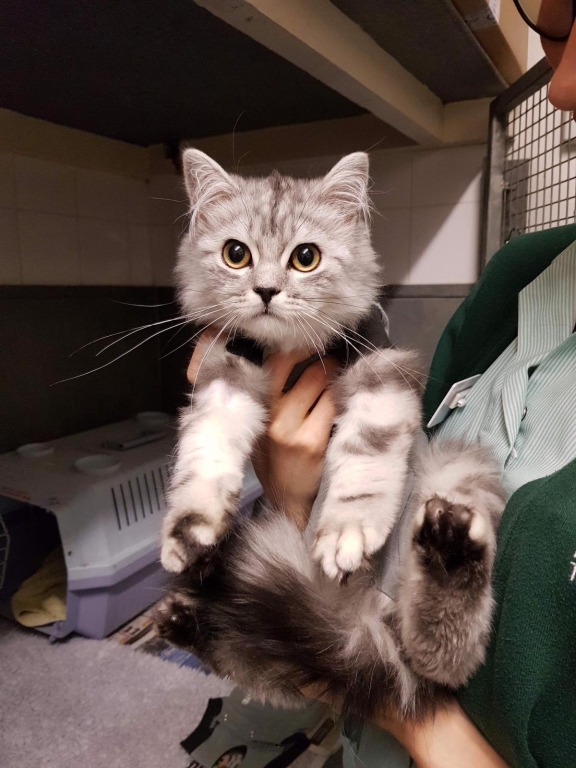 Dr Dan Andrews, of Medivet 24 Hour Faygate, has successfully performed a life-changing operation on two kittens born with a sternal cleft - a rare defect that means that their chest wall did not develop properly before they were born.

With the surgery completed, the kittens are now looking forward to a normal life. The pair have been lucky enough to have found a loving new home - thanks to the compassionate efforts of a veterinary nurse working at nearby practice, Medivet Dorking.

The kitten siblings, a male and female, were admitted to the Horsham-based 24 Hour Faygate practice so that the abnormalities in their chests could be examined. Branch partner and lead veterinary surgeon Dr Dan Andrews explained: “Both had a large defect in their chest wall. In fact, it was possible to insert a finger into their chests and feel their hearts beating, with only a thin layer of skin separating the vital organs from the outside world. Without an operation we knew that their chances of survival were slight.”

The practice wanted to give the kittens a chance so decided to proceed with treatment. X-rays confirmed the sternal cleft defect, while a CT scan showed that the sternum (breastbone) had failed to fuse properly - creating a V-shaped hole in the bottom of the kittens’ chests. The CT scan also identified a hole in the diaphragm and floor of the abdominal wall. This risked the kittens’ abdominal contents moving into their chest cavity.

Dr Andrews continued: “We needed to operate but wanted to wait until the kittens were a little older and larger. While we waited, we researched how these defects are typically dealt with in human medicine and consulted papers documenting the few reports of this type of treatment in animals.”

When the day came, the male kitten was operated on first. Dr Andrews and his colleague Dr Bruno Santos incised the bones forming the V-shaped split in his sternum (breastbone) and used the tissue to create two flaps. The sternum was then fractured with a saw, which allowed the two arms of the abnormal sternum to be drawn together. The fibrous flaps were then sutured in place with the aim of creating a fused, permanent bond, which would repair the defect.

The defect in the diaphragm and the body wall were then successfully repaired. The team then carried out the same procedure on the female kitten. With no complications whatsoever, both kittens went on to make an excellent recovery

“We caught up with the kittens again two weeks later,” added Dan. “Their wounds had healed well, the defect had been fully repaired and both had grown significantly. Perhaps the best news of all was is that they have now been rehomed together thanks to the wonderful efforts of one of our local veterinary nurses, Ellie.”

Looking back, we had two potential plans for closing the defects and fortunately plan A was successful in both kittens. The remarkable thing was the speed with which the kittens recovered after their procedures. Within a few hours, they were eating and carried on as if nothing had happened.”