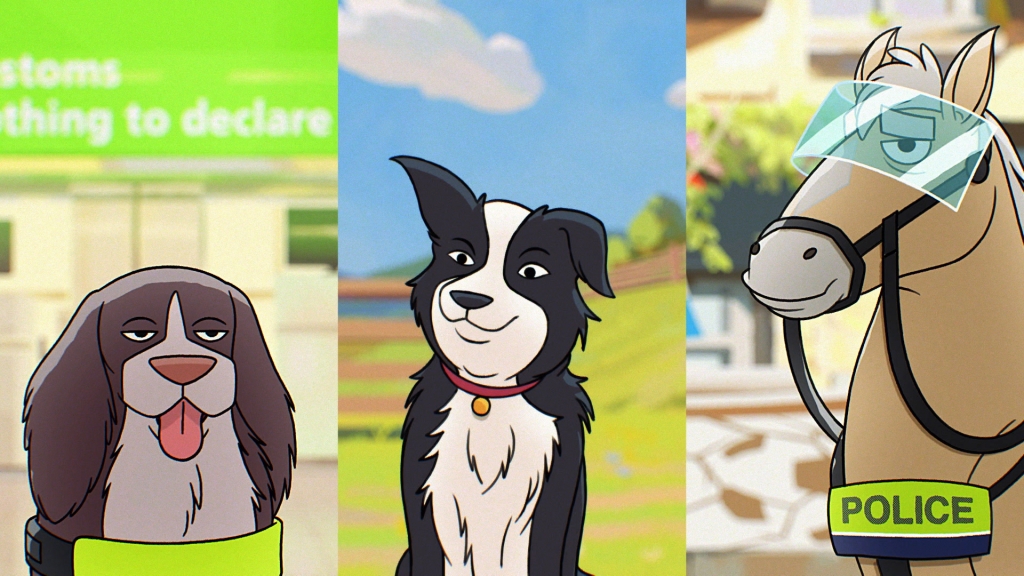 Actor Brian Blessed OBE, Dragons’ Den entrepreneur Deborah Meaden, and Downton Abbey and After Life 2 star Peter Egan, have joined together to speak up for working animals around the world, in a new animated film for the charity SPANA (the Society for the Protection of Animals Abroad).

SPANA improves the welfare of working animals in 26 developing countries worldwide, providing free veterinary treatment, training for owners in how to better look after their animals and humane education for school children.

The film aims to raise awareness of the lives of working animals overseas by showing the solidarity of our own working animals on strike. A sniffer dog (voiced by Brian Blessed), police horse (Peter Egan) and sheepdog (played by Deborah Meaden) are comically shown ignoring their daily duties and protesting in solidarity with animals in developing countries. According to the characters, the strike is being carried out: ‘for all the camels, donkeys and mules overseas, working as trucks, taxis and tractors, to be as looked after as we all are.’

Geoffrey Dennis, Chief Executive of SPANA, said: ‘We are so grateful to Deborah, Peter and Brian for lending their voices to our new film, and for speaking up for millions of working animals overseas. SPANA believes that a life of work should not mean a life of suffering, and it is only thanks to people’s generosity and support that we can continue our vital work improving the lives of these animals.’

Around the world, more than 200 million working animals, such as horses, donkeys, camels and elephants, support the livelihoods of more than half a billion people in the poorest communities. By transporting food, water, firewood and people, they make it possible for families to earn a small income.

However, these animals often endure terrible working conditions, carrying backbreaking loads in extreme temperatures. In the vast majority of cases, they face short and painful lives, with no access to veterinary care when they are sick or injured.

Deborah Meaden said: ‘I am delighted to be a part of SPANA’s new film. Working animals overseas often have very hard lives, but few people are aware about the suffering they endure. They urgently need our help and support, and we hope this film will put working animals in the spotlight, so they can receive the same care and compassion as most animals in the UK.’

Peter Egan said: ‘SPANA does incredible work in helping children – the animal owners of the future – to develop feelings of respect and empathy towards animals. Education is so important in ensuring that working animals can live happier, healthier lives in the future. That is why I am so pleased to lend my support to SPANA and this powerful film.’

Brian Blessed said: ‘I support SPANA’s work wholeheartedly, and it was wonderful to be a part of this new film. In the poorest communities across the world, people work tirelessly to simply put food on the table for their families – and working animals are their lifeline. The lives of these people and animals are unimaginably difficult, but we can help make a considerable difference to them.’

To view the video and find out more about SPANA’s work please visit: https://spana.org/onstrike