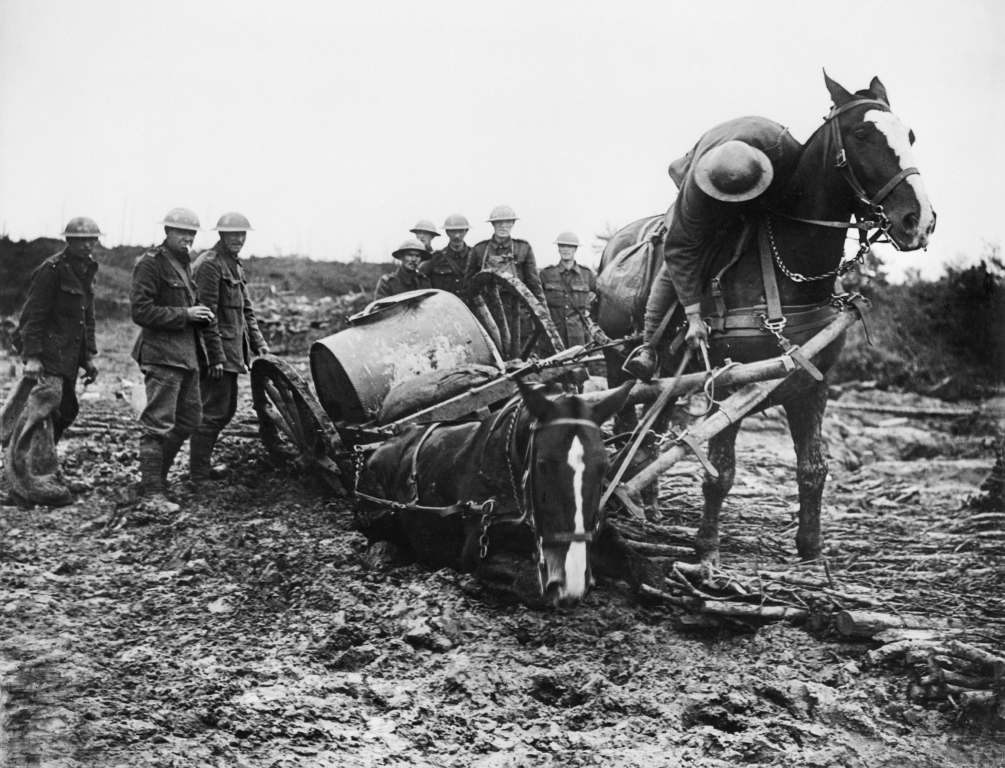 A century on from the end of the First World War, animals continue to be innocent victims of human conflict around the world, according to international animal charity SPANA. Today, Ann Widdecombe launches the charity’s campaign to remember the many millions of animals that have been used, and killed, in one hundred years of war.

11 November marks a century since the end of the Great War. Around 16 million animals were put into service on all sides during the war, including one million horses and mules used by Britain. These animals faced terrible conditions, transporting ammunition, messages, food rations and supplies. They hauled guns and pulled ambulances, while cavalry horses often led the charge on battlegrounds. Nine million horses, donkeys and other animals were killed.

Despite increasing mechanisation, animals were still widely used during the Second World War by forces on both sides. Britain – the first nation to motorise its army – still had around 200,000 animals in service, while the US military used 14,000 mules in Italy alone. The German Army lost over 179,000 horses in two months on the Eastern Front.

While the use of animals in the front line is now less common, animals continue to suffer in conflicts today. In Iraq, Somalia and Afghanistan, there have been numerous incidents of animal-borne bomb attacks, in which insurgents have attached explosive devices to donkeys and horses in order to target crowded areas and convoys.

Animals have also been deliberately targeted. During the Gulf War, more than 80 per cent of livestock in Kuwait died, while in the late 1990s, Kosovo’s cattle population halved to 200,000.

Wars have also had damaging consequences for animals long after the final shots have been fired. In the twenty years following the Vietnam War, around 40,000 animals are estimated to have been killed by landmines.

Launching the campaign, SPANA ambassador Ann Widdecombe said: ‘On this significant anniversary of the First World War, it’s so important that we first and foremost remember the people who lost their lives during this terrible conflict and then consider also those who returned disabled and disfigured and the civilians who died. They faced unimaginable horrors. Then, as we stop to remember all those who suffered and died a century ago, we must also not forget that animals continue to be innocent victims in brutal conflicts across the world today.’

Geoffrey Dennis, Chief Executive of SPANA, which provides free veterinary treatment to working animals in developing countries, including in conflict zones, said: ‘In recent years, SPANA has worked in war zones – from Kosovo and Iraq to Afghanistan – to provide urgent veterinary treatment to animals in severe distress. Our work eases suffering and also helps build the peace among communities who continue to rely on animals.

‘As we commemorate Armistice Day, it is a sad reality that the appalling suffering of animals in conflict zones is not a distant memory, consigned to history. But while there are animals in desperate need, during times of war and peace, it is vital that help is on hand for them.’

SPANA’s work in conflict areas has included setting up a mobile veterinary clinic in Iraq in 2003. Following a request for urgent help for equines and farm animals, SPANA assisted animals with veterinary medicines and provided thirty tons of fodder.

To find out more about animals in war, and what SPANA is doing to help them, please visit www.spana.org/animals-in-war.

ANIMALS IN CONFLICT SINCE 1914 - TIMELINE

1914-1918 – First World War: More than 16 million animals were made to serve on all sides, with nine million killed (including eight million horses, mules and donkeys)

1917 – First World War: Britain had over one million horses and mules in service (over the course of the war Britain lost more than 484,000 horses)

1918 – First World War: The British Army Veterinary Corps gained the ‘Royal’ prefix for its efforts in mitigating animal suffering. This was the first war in which a trained veterinary service existed

1936-1939 – Spanish Civil War: The war saw the demise of roughly half of Spanish livestock, and post-war Spain had to import thousands of working mules from overseas

1939 – Second World War: Britain became the first nation to motorise its army, and had begun to replace horse cavalry with armoured vehicles in 1928

1939 – Second World War: Over 750,000 domestic pets were killed in Britain in one week following a government public information campaign about their safety and expected food shortages

1942-1945 – Second World War: The British and Japanese in Burma used elephants for transport, building bridges and roads, and for pulling trucks out of the mud

1944 – Second World War: 14,000 mules were used by US military in northern Italy, and China used more than 20,000 mules in battles against the Japanese

1950-1953 – Korean War: Chinese and North Korean forces used mules to transport supplies, including during the 1951 Spring Offensive against South Korea

1955-1975 – Vietnam War: Use of Agent Orange to eliminate forest cover destroyed the habitats of tigers, Asian elephants, gibbons, civets, leopards and other species. At least 40,000 animals were killed by unexploded landmines in the 20 years following the war

1977-1992 – Mozambique Civil War: Giraffe and elephant herds in the Gorongosa National Park shrank by 90 per cent

1980-1988 – Iran-Iraq War: Populations of wild goat, wolves, otters, pelicans, striped hyenas, river dolphins and other wildlife were wiped out or reached the point of extinction

1990s – Afghan War: Over 75,000 animals were lost due to mines – more than half of the total livestock population

1997 – First Congo War: Armed militias reached Garamba National Park and, in three months, half of the park’s elephants, two-thirds of buffaloes and three-quarters of hippos disappeared. Garamba had also been home to the last surviving wild Northern white rhinos

2001-present – War in Afghanistan: Military dogs supported British Special Forces operations. The UK Ministry of Defence said the role of the 11,000 dogs working across the armed forces ‘cannot be underestimated.’

2003-2011 – Iraq War: Insurgents commonly strapped bombs to dogs to target convoys and used donkeys to pull carts of explosives for the same purpose

2014 – Gaza Conflict: 20 per cent of the animal population estimated to be lost – including 15,000 missing sheep and goats