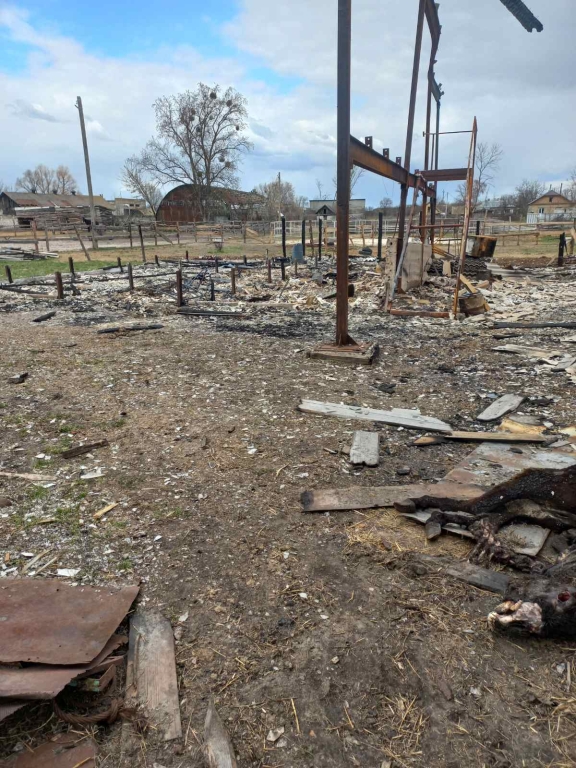 Horses remain under serious threat within occupied areas of the Ukraine, with horrendous accounts of animals continuing to be maimed or killed, while grooms and carers risk their own lives by refusing to abandon them, says David Rendle, president elect of the British Equine Veterinary Association (BEVA).

Having returned from the Ukraine-Poland border earlier this week, David delivered essential veterinary supplies from the UK including antibiotics and pain-relieving medications. He also worked with British Equestrian and World Horse Welfare to help treat and to relocate horses from Ukraine. While there he received pictures and testimony of a number of attacks being carried out by Russian forces on stables in Bucha, Irpin and other equestrian premises north of Kyiv.

Ukraine vet Anatoly Levitsky who is working in Kyiv reports: “Not very big horse club was not far from Borodianka and owners were using their horses for hippotherapy of children with different pathologies. When war started, the lady who owned the stable and her child emigrated to Poland and her husband was conscripted into Ukrainian army. When Russian bandits in army uniform came to the village, they set fire to the stable and started shooting the horses that tried to escape.”

“Some horses ran away, others were wounded, and some were burned down. After the building was burned, Russian soldiers went away and horses that escaped were wandering around the village and trying to find the feed. Step by step, people living in the village collected the horses and keep one or two horses in their yards.”

“It is hard to understand what could motivate anyone to perform these deliberate acts of cruelty,” said David.  “Random shootings, stabbings and burnings are widely reported and pictured on social media, we have no idea how many horses are dead and how many injured, but it has to be a significant number.

“Some of the lorry drivers I have met coming out have been shot at, shelled and beaten up, evacuating surviving horses. They are taking risks that we would consider totally unacceptable to move animals out and supplies in; I have nothing but admiration for the bravery of the Ukrainian people.”

“Ever conscious that there is an equal humanitarian need you feel very small and rather cowardly that you aren’t permitted to go into Ukraine to help the people and animals that require treatment.”

The British Equine Veterinary Association and American Association of Equine Practitioners are working together to support vets in Ukraine whilst they are not permitted to provide direct practical help.

There are dire shortages of medicines and materials in the areas where they are needed, and the collaboration is doing what it can to get veterinary and humanitarian supplies to the vets they are in contact with.

They are working to establish safe stables in the West of Ukraine to get horses and their owners away from likely areas of combat in the East. Previously people have had no option but to turn horses into the woods prior to fleeing or they have stayed to look after their animals despite the risks to themselves.

BEVA, in association with the British Equestrians for Ukraine Fund, is calling for urgent support to help fund veterinary treatment, supplies and the safe relocation of Ukraine’s endangered horses. To do this they need your urgent support. To make a donation visit https://www.worldhorsewelfare.org/support-us/appeals/british-equestrians-for-ukraine-fund.

To find out more you can listen to a podcast from David Rendle here https://beva.podbean.com/e/bevapod-episode-13/