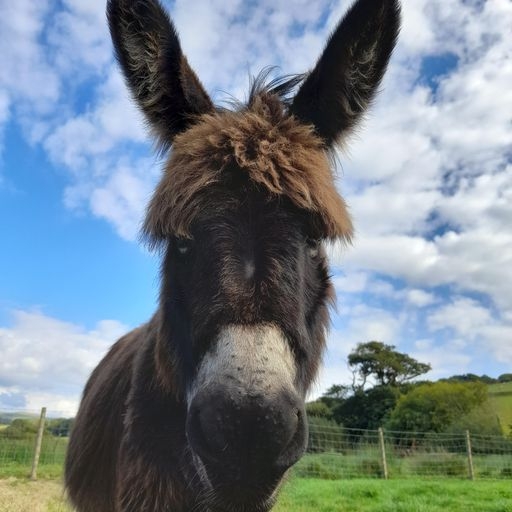 
The National Equine Forum has announced the winner of its recent photography competition; Claire Evans Watkin’s magnificent headshot of her miniature donkey Ziggy will feature on the programme cover for the 31st National Equine Forum, which takes place on Thursday 2nd March 2023 (#NEF23), as well as in other #NEF23 contexts.

A total of 40 budding equine photographers from around the world submitted 47 equine images, ranging from creative black and white silhouette shots to earthy evocative images. Entries were received from Brazil, Canada, America and Norway as well as from the UK.

“We received some beautiful photographs and it was a big challenge for the committee to produce a shortlist and then choose the winner,” said NEF Convener Georgina Crossman. “We were lucky to have some professional support from NEF’s official photographer Craig Payne who identified Ziggy as the outstanding winner.”

“I absolutely love this entry,” said Craig. “It is bright and colourful and the clouds give intrigue which contrasts nicely with the donkey's big ears and the unusually shaped tree in the distance. The photo has been taken from slightly beneath the donkey and this helps to silhouette it and avoid too much of the grassland, and the fact the donkey is looking down the camera could be said to drive home the point that the Forum is for all equines. This is a key point as we haven't featured a donkey on the cover before.”

Claire, who is from Ceredigion in Wales not only has the pleasure of seeing her beloved Ziggy on the cover of the NEF 2023 programme, but she will also receive a special food hamper as her prize.

She said: “I am so excited that my picture of Ziggy has been chosen as the winning entry for the National Equine Forum programme cover competition. I have a real passion for photography and Ziggy is a great model. I can’t wait to see him on the cover of the 2023 programme.”

During the past two years the NEF committee has welcomed several new members: James Hick, Chief Executive of the British Horse Society; Sheila Voas, Chief Veterinary Officer for the Scottish Government; and Jim Eyre, Chief Executive of the British Equestrian Federation. The NEF Honorary Secretary Debbie Rolmanis will be stepping down after #NEF23 and her role will be taken on by Vicky Kangurs.  The full list of committee members can be found on the website www.nationalequineforum.com/about/.

Details of the programme for #NEF23 will be released shortly. To find out more about NEF visit www.nationalequineforum.com

Cheltenham, Gloucestershire. United Kingdom
Bourton Vale Equine Clinic have an opening for a full-time stud vet. We are looking for a motivated individual who will be ready to hit the ...

York, North Yorkshire. United Kingdom
Are you a new graduate vet with an interest in racing work? Do you seek a supportive environment in which you can learn and develop your ski...

Scotland. United Kingdom
An independent equine practice just north of Edinburgh is seeking an experienced locum equine Vet over the coming months.April start - Any a...