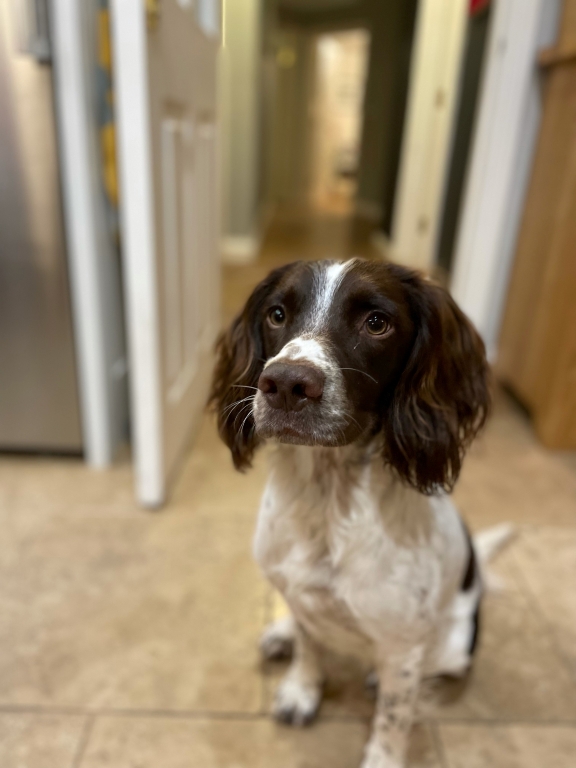 Anderson Moores To The Rescue After Finn's Cliff Top Fall

A young Springer Spaniel who suffered extensive injuries after plunging from a cliff top during a trip to the seaside has made an incredible recovery after expert treatment at one of the UK’s leading animal hospitals.

One-year-old Finn was admitted to Linnaeus-owned Anderson Moores Veterinary Specialists, in Winchester, where after receiving multidisciplinary input, he underwent two operations to repair the dramatic internal injuries sustained in the horrific incident.

Davina, a RCVS and European specialist in surgery, said: “When Finn arrived, he was lame on his right pelvic limb, had a wound affecting his stifle joint and had also fractured his patella in the fall.

“We performed a CT scan to examine for internal injuries and it showed marked damage of the liver tissue due to trauma and suspected hepatic ducts avulsions, which are very rare.

“There were fissure lines throughout the liver where the fall had ‘fractured’ the liver, which is also very unusual.

“There was also abdominal distention secondary to a suspected bile duct rupture which was leaking bile fluid into the abdomen.

“Finn underwent two surgeries to find the source of the leak. In the first surgery, we found a significant leak from a torn hepatic duct – one of the tubes that carries bile from the liver – from a branch from the left medial lobe. The leak was closed with clips and sutures.”

Finn initially appeared to be making a remarkable recovery with input from the soft issue, anaesthesia and medicine teams at Anderson Moores. He was brave and bright throughout his hospital stay, was eating well despite his injuries and was discharged a week after surgery.

However, Davina revealed there was another twist to the tale, adding: “Finn’s attentive owner spotted he was developing an abdominal effusion again – leaking fluid internally – and he visited us again just two days later.

“Surgery was necessary for a second time, on this occasion removing the left medial and lateral liver lobes to stem the leaks. Finn recovered rapidly and this time he headed home within three days and is now doing very well.”

Finn’s owner Georgia Millan, from Marden, in Hereford, said she was devastated when her beloved pet suddenly darted over the cliff top and was indebted to the experts at Anderson Moores for helping him to recover.

She said: “We were so worried as we knew how life-threatening Finn’s condition was, so it was an incredibly concerning time for us, especially when we realised that he needed a second surgery.

“The team at Anderson Moores were brilliant though and really good at explaining how Finn was doing and keeping me updated. Thankfully, he has made a fantastic recovery and we’re all just so grateful it wasn’t worse. We are incredibly lucky.”