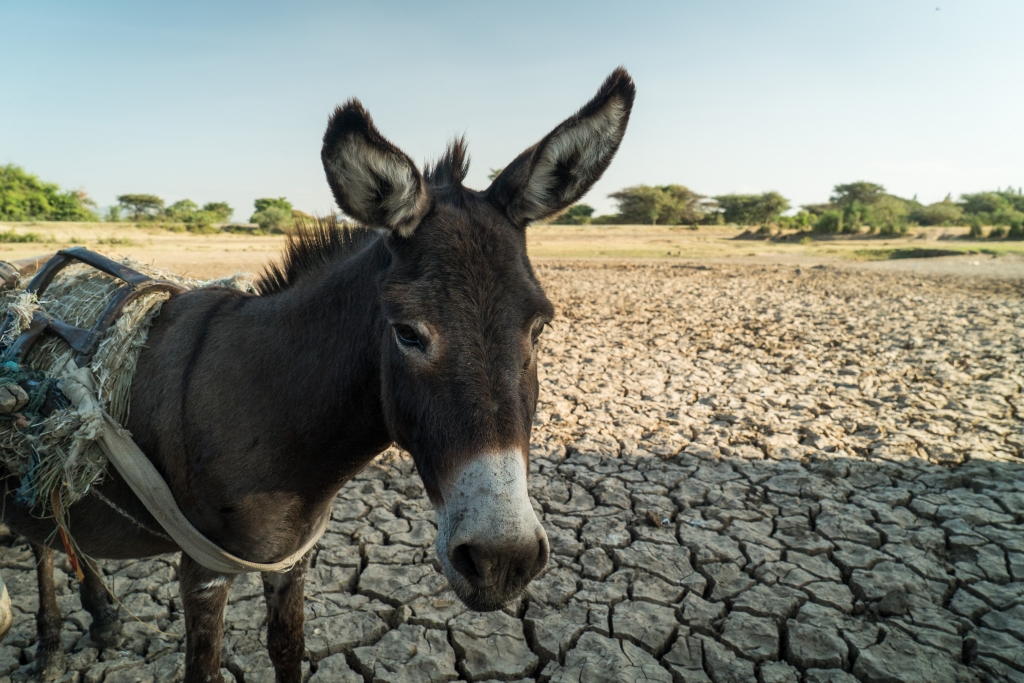 A working donkey in a drought-stricken area of Ethiopia © SPANA

ANIMALS ARE THE ‘SILENT VICTIMS’ OF CLIMATE CHANGE

Animals are the silent victims of the global climate crisis, according to global animal charity SPANA (the Society for the Protection of Animals Abroad). As the UK prepares to host the UN Climate Change Conference (COP26) later this month, the charity is calling for urgent action to protect animals – including working animals and livestock – and the poverty-stricken communities who depend on them for their survival.

Severe drought and natural disasters – such as flooding, cyclones and wildfires – are having a devastating impact on working animals and the families they support in low-income countries worldwide – and the situation is deteriorating fast as the climate crisis intensifies.

These environmental catastrophes, combined with plastic pollution and other man-made problems, are leading to the spread of disease, causing injury and death, and eliminating food and water sources, impacting animals, vulnerable communities and our environment.

The crisis is striking across all continents. For instance, it is estimated that 80 per cent of Somaliland’s livestock died as a result of the crippling drought affecting east Africa in 2017.

In 2016, more than one million animals were victims of the ‘dzud’ in Mongolia – a climatic phenomenon where a summer drought is followed by extreme winter temperatures as low as -50˚C, leading to the death of animals in vast numbers due to starvation or the cold. More than eight million animals were killed as a result of the previous dzud in 2010, and these events are becoming more frequent due to climate change.

Official figures in India estimate that 17,000 animals (including oxen and buffaloes) were killed by cyclones across the country in 2020, and nearly one million cattle are thought to be lost to flooding in India every year.

Linda Edwards, Chief Executive of SPANA, said: ‘The spiralling climate disaster is now high on the political agenda, but the devastating impact on animals is still almost completely overlooked. Animals are suffering terribly from drought and the extremes of climate change, paying the ultimate price in vast numbers. And there is a heavy human cost to the loss of these animals too, as so many families in the world’s poorest regions depend on them for their survival.

‘We have reached crisis point – every day the lives of working animals and those that depend on them are made worse by the devastating effects of extreme weather. It is imperative that firm international commitments are made to address the wider impact of climate change’

John Craven OBE, Patron for SPANA, said: ‘The climate crisis is affecting every one of us, in all parts of the world, but it is often communities and animals in developing countries that are suffering the most.

‘Working animals overseas help ensure the survival of millions of families who have almost nothing. But the survival of these animals themselves is now at severe risk. It’s time to give them the urgent support they need. SPANA is making a lifesaving difference, providing relief for working animals facing the consequences of environmental turmoil across the world.’

In response to the escalating crisis, SPANA is providing a lifeline to working animals in many of the world’s poorest communities. The charity is providing free veterinary care and vaccination programmes, as well as carrying out emergency projects to ensure that water, feed and shelter from extreme conditions is available to animals in desperate need.

For instance, following the most severe drought in years in the Turkana region of Kenya, SPANA constructed a 110-metre-deep solar-powered borehole to provide a sustainable supply of fresh water for more than 15,000 animals and nomadic pastoralist communities.

Globally, more than 200 million working animals – such as horses, donkeys, camels, oxen and elephants – support the livelihoods of at least 600 million people in the world’s poorest communities. By performing the role of trucks, tractors and taxis, and transporting food, water, firewater and other essential goods, these animals make it possible for their owners to earn a small income and put food on the table. When climate change and disasters strike, the loss of these animals can jeopardise the survival of entire communities.

Find out more about the impact of climate change on working animals by visiting the SPANA website: spana.org/worldanimalday