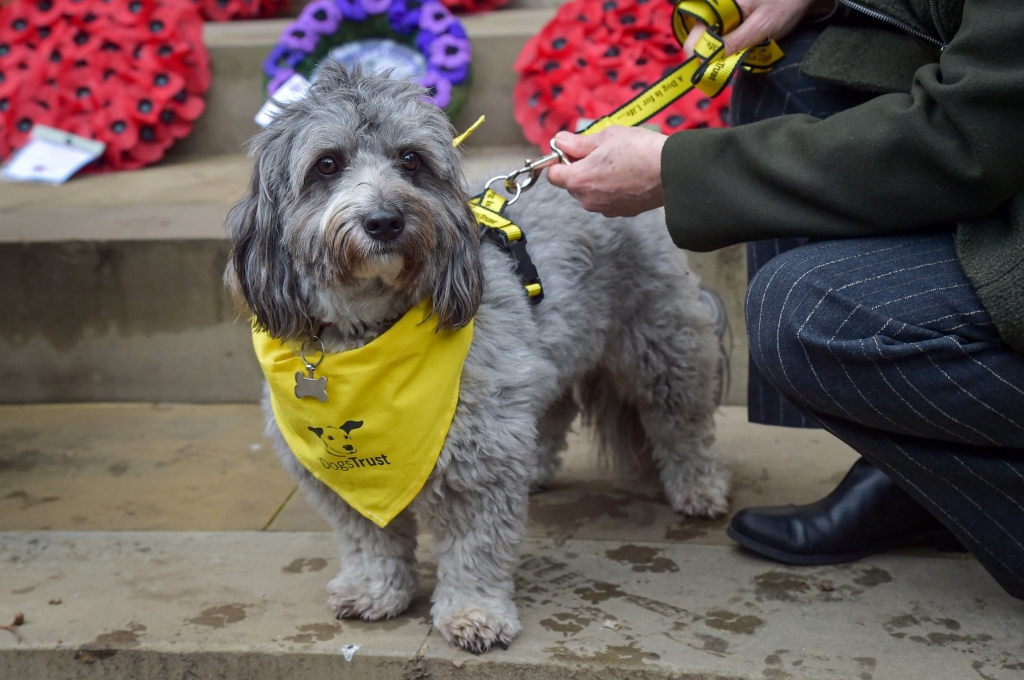 Dog with a yellow Dogs Trust bandana standing next to wreaths


Dogs Trust and Petplan Charitable Trust held a special remembrance service in London on Thursday 10 November to commemorate animals who have served and suffered in conflict.

The event was attended by representatives from the animal welfare sector along with a number of dogs, who gathered at the Animals in War Memorial in Hyde Park. Wreaths were laid and a minute’s silence was held to remember the animals that have served and continue to serve in conflicts throughout the world.

Held annually since 2004, when the memorial – designed by English sculptor David Backhouse - was unveiled by HRH The Princess Royal, the special service commemorates the horses, mules, donkeys, dogs, pigeons and other animals who have served the country in wartime.

Tributes were also given to animals who have been caught up in conflict with speeches recognising the impact war has on pets who are sadly abandoned, as well as those who live on the streets.

Anel Becirovic, President of Dogs Trust Worldwide Foundation Bosnia spoke about the charity's work over the past decade of improving the welfare of street dogs in Bosnia and Herzegovina. Following the Bosnian War, the country had a significant stray dog problem, and with the support of the charity who worked with local communities, thousands of street dogs have had their lives improved and the number of dogs living on the streets has plummeted.

“It’s important that we remember all the animals that served alongside our soldiers to recognise their loyalty, bravery and spirit to ensure they are never forgotten. It’s heart-warming to be joined by other charities to commemorate these animals.

“We also want to acknowledge that conflict has a devastating effect on all animals, including our domestic ones – which we have sadly seen over the recent years in Bosnia and Herzegovina and Ukraine.

“Along with the other charities here today, we are proud of our achievements in improving the lives of dogs who have been caught in the middle of conflict as well as looking to the future to continue to make better lives for dogs and owners across the globe.”