BVA Kicks Off Campaign On Written Contracts Of Employment

In a survey of its young graduate members the British Veterinary Association’s Young Vet Network (YVN) has found that only 76% had a contract of employment, leaving many exposed and less able to defend themselves should a problem arise during their employment. More alarmingly the survey found that over 40% of recent graduates had been in a job for over 6 months without a written contract in place. 38% of those had asked for a contract but their employer did not address the issue while 14% did not even ask for a contract knowing that their employer would do nothing about it. The YVN is now launching a campaign to raise awareness about the importance of written contracts of employment which set out employment rights, responsibilities and duties with the help of the Royal College of Veterinary Surgeons (RCVS), the Veterinary Practice Management Association (VPMA) and the Society of Practising Veterinary Surgeons (SPVS). Louisa Rance, Senior Graduate Representative on BVA Council, said “Evidence was coming through on the YVN forum that a significant proportion of YVN members did not have written contracts of employment in place. We wanted to do something positive with this information and, through the BVA, are able to run an information campaign promoting the benefits for both the employee and employer of having written contracts in place. This is not a finger pointing exercise, but a concerted effort with a number of other veterinary organisations to improve the situation for all parties.” 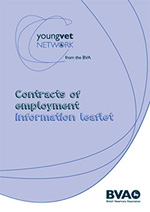 An information leaflet is at the centre of the campaign givingEmployers have a duty to provide a written statement of their main employment terms within two months of starting work. “As employers, sorting out contracts can sometimes make you feel remote from the people you work with. That is why I like to get written contracts out to a new employee as soon as they have accepted the job offer. At that point we are happy to talk through any issues of concern or queries they may have on the contract, so that by the time they start work both the employer and the employee know exactly where they stand.” said BVA President Nicky Paull. The campaign coincides with the re-drafting of the contracts of employment template which BVA members can download from the BVA website. Members can also call the free legal advice line. “SPVS firmly believes in a strong and equitable employment relationship and has promoted this for some time. We are pleased to help and support BVA in this important area” said Iain Richards, President-Elect of SPVS. Jill Nute, RCVS President and Chairman of the Practice Standards Scheme, added “Having proper contracts in place is for the benefit of both employee and employer and is certainly something we would support. It’s included in the Practice Standards Scheme from core level upwards. We would urge all new and recent graduates to ask about contracts at the earliest opportunity and to consult the BVA’s Young Vet Network for advice on what should be included.” Sarah Hibbert, Senior Vice President of the VPMA, agreed “Employment contracts form the basis of a solid working relationship and are of equal importance to both the employee and employer. It is also good management to ensure that the issue of such documentation is made promptly and with lines of communication clearly open. The VPMA therefore urges all those involved in the management of veterinary practice to support the BVA contracts campaign.” The Young Vet Network (YVN) research was carried out online in March 2009 with 266 YVN members responding.