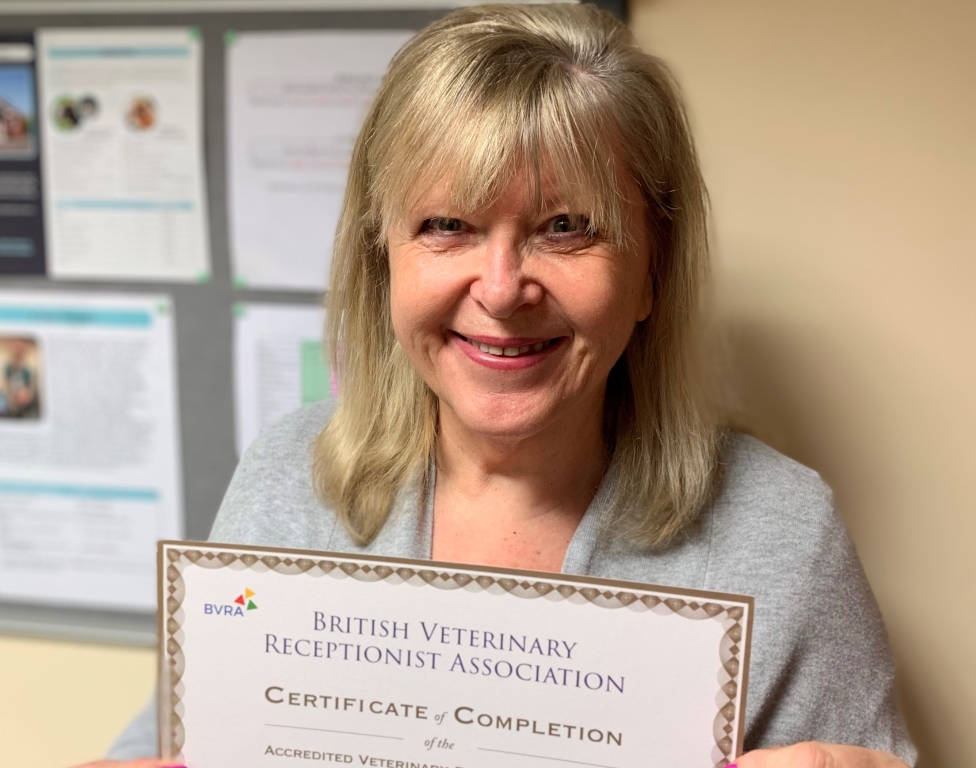 Sheila had already been working in reception for many years when Clinical Director Lucy Crosby mentioned the award. Sheila says her first comment was, "But I know everything about reception!" She admits this caused a few chuckles but she went ahead with the course, “I found that I did know rather a lot but also there were things that I was not sure about and I did learn much more. It gave me confidence when I applied the information to my work with clients.”

Sheila was also able to celebrate her achievements at every stage and feels that it has changed her approach at work, “The joy when opening emails to say that I had passed each end every section was brilliant and gave me such a boost. It also spurred me on to take on more tasks. I like to keep checking out what other courses are coming up.”

Lucy says the whole experience has been positive from a practice viewpoint, “"I was thrilled to hear that Brian Faulkner had set up BVRA to offer veterinary receptionists CPD, as this is an area of practice which has been much neglected. I'd been trying to find relevant courses for my receptionist team and, up until now, had failed to find something suitable. There were some mixed feelings about the course when I first signed up my team as most of them had not done any CPD before. Sheila Potter was quite sure that there wasn't much she didn't know about being a veterinary receptionist, given that she has been doing the job for many years! However, she threw herself into the course and quickly progressed from Bronze, through to Silver and then finally Gold. She absolutely thrived on these courses and we could all see a noticeable difference in the way she tackled front of house issues and taking ownership of the problems presented to her. Not only that, but the sense of achievement spurred her on to want to do more and it's clear to see that she's enjoying the role even more now that she has learnt all these new skills. It's been wonderful to watch and I'm so grateful to the BVRA for giving us this platform to allow team members, like Sheila, to excel in something they love. "

BVRA founders Brian Faulkner and Kay Watson-Bray have been thrilled to see Sheila progress through the course. Kay says, “It’s been an absolute pleasure to see Sheila make her way through all the various stages to achieve her accreditation and she absolutely deserves her award. We hope this encourages anyone out there who is thinking of tackling something in their career that perhaps takes them out of their comfort zone but is worried that they’ve left it a little late, to give it a try – you can learn something new and achieve something notable, whatever your age.”

The last word goes to Sheila who says, “Age has no boundaries – we can all achieve things if we push ourselves just a little bit more. To all the more mature receptionists out there, my recommendation is, go for it!”