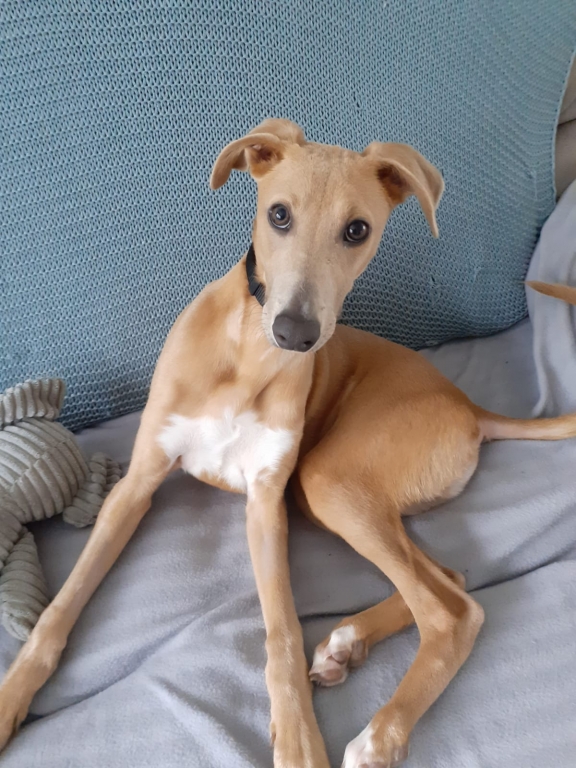 COCO’S NEW LIFE THANKS TO MY VET’S BERNIE

A sick Lurcher puppy left for dead at a shopping centre car park has made a spectacular recovery after three weeks of intensive care at a leading County Dublin animal hospital.

Coco was just 18 weeks old and weighed less than seven kilos when he arrived at My Vet in Lucan suffering from severe vomiting, diarrhoea and dehydration.

He was so ill with parvovirus, an aggressive virus which attacks the intestines, that he was not expected to survive but expert staff at the Linnaeus-owned clinic worked tirelessly to save his life.

Vet Kirsty Clayton led Coco’s treatment but remarkably, one of his key carers was Bernie Courtney, My Vet’s HR and operations manager, who pitched in and joined the nursing staff working around the clock to save him.

Bernie said: “Being a passionate animal lover and a sucker for the most vulnerable, I decided that I was going to play my part.

“I joined the team in barrier nursing him during the day and I visited him every night to give him that little bit of extra care and attention in the hope that it would contribute to his survival.

“I came back into the clinic every night at 10pm and tried to coax him to eat. In the early days there was a lot of coaxing but not a lot of eating.

“Then in the middle of week two he took two slices of ham from our animal care assistant Sadhbh McGivern and that’s when we knew he was going to pull through.

“After that I planned his midnight feast each night and he had anything from boiled steak mince to rotisserie chicken, in conjunction with his GI puppy food.

“He loved it and it got to the point that he expected to see me every night so I couldn’t miss a single night in case I disappointed him.”

Sure enough, Coco survived but that still wasn’t enough for Bernie, who promptly took two weeks of annual leave so she could help him recover and rehabilitate.

Bernie added: “When he had finished shedding the virus and was safe to be around other animals, I took him home to build him up, get some weight on him and do a bit of basic training.

“This is what I did for my two weeks’ annual summer leave this year and it was worth every minute.

“His weight upon entry to the clinic was just under seven kilos so he was very, very underweight and emaciated.

“In the three weeks he spent with me he gained almost four and a half kilos in weight, was crate trained for sleeping at night-time, was toilet trained and learned how to sit and stay.”

Then Bernie went even further and even found Coco new owners who have given him a new lease of life and lots of TLC.

She added: “Coco has now gone to his forever home with a friend of mine and is the luckiest, happiest puppy.

“They are besotted with him and he keeps them well entertained and on their toes as his new owner tells me that he absolutely loves the stairs, loves cushions and likes to spend his evening chilling on the sofa whilst they watch television.”

Founded in 2005, My Vet is a family practice employing more than 50 staff across its three sites in Firhouse, Lucan and Maynooth. For more information, visit www.myvet.ie.