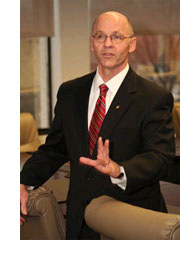 APHIS administrator takes on key AVMA role - The Department of Agriculture's top veterinarian, Dr. W. Ron DeHaven, has been chosen as the next AVMA executive vice president. Dr. DeHaven, administrator of the USDA Animal and Plant Health Inspection Service for the past three years, was approved by the Executive Board March 23 following a nationwide search to replace Dr. Bruce W. Little, who is retiring later this year. It wasn't yet known as of press time when Dr. DeHaven would begin in his new role at the AVMA. As head of APHIS, Dr. DeHaven ran the agency responsible for protecting U.S. agricultural and natural resources from exotic pests and diseases, administering the Animal Welfare Act, and implementing wildlife damage management activities. AVMA Executive Board Chair James O. Cook commended the Executive Vice President Search Committee, chaired by District VIII Representative Larry M. Kornegay, saying they "outdid themselves by providing an outstanding candidate who was approved unanimously by the Executive Board." "Dr. DeHaven's familiarity with all dimensions of the veterinary profession brings a broad base of understanding of the issues that affect our profession," Dr. Cook said. "The Executive Board looks forward to working with Dr. DeHaven. With the addition of his leadership skills, the AVMA is poised to do great things for the animals and people our organization serves." Dr. Kornegay explained that the AVMA started the selection process by surveying some of its members, AVMA leaders, industry representatives, and veterinary school leaders to create a profile of the attributes that an ideal candidate should posses. Candidates went through a rigid and thorough interview process. "The search committee was fortunate to have many excellent candidates, but Dr. DeHaven just stood out, and he was a clear, unanimous choice," Dr. Kornegay explained. "Dr. DeHaven has done an excellent job as administrator of APHIS. This is a unit of government that has a $1.9 billion budget and 8,300 employees." Dr. DeHaven is endowed with both a scientific mind and the ability to communicate well with other veterinarians and public health professionals, as well as the media and the general public, Dr. Kornegay added. These tools will be tremendous assets to AVMA members when Dr. DeHaven assumes the role of executive vice president, he said. In a March 26 e-mail announcing his resignation to APHIS staff, Dr. DeHaven wrote, "We are facing a future where the intersection of animal health and public health, and food supply veterinary medicine, is becoming critical to meeting the needs of a global society. This position at the AVMA will provide me an exciting opportunity to cap off my career by giving back to the profession in a different way." Dr. DeHaven joined APHIS in 1979. He served in various capacities there, including as deputy administrator of Veterinary Services and deputy administrator of the Animal Care unit. He was also Animal Care's Western regional director based in California. In April 2004, then Agriculture Secretary Ann Veneman chose Dr. DeHaven to lead the agency. As the USDA's chief veterinary officer, Dr. DeHaven gained national prominence in 2003 and 2004 when chronic wasting disease and bovine spongiform encephalopathy were making headlines. His leadership during both events earned him the Secretary's Honor Award twice. The AVMA honored Dr. DeHaven's contributions to the veterinary profession with the Meritorious Service Award in 2004. Through the years, Dr. DeHaven has worked closely with the AVMA. He represented APHIS on the Panel to the House of Delegates and was the APHIS consultant to the Animal Welfare Committee. Additionally, he has been a featured speaker at the Association's Veterinary Leadership Conference and the biennial Executive Board and House Advisory Committee legislative visits to Washington, D.C. After the board vote, Dr. DeHaven met with a small number of AVMA staff. His years with APHIS were satisfying, he said, and now he's looking forward to beginning his "second career" in veterinary medicine. "It's been a rewarding career for me, but I'm not looking at this as a retirement job, by any means," he said. As a candidate for the executive vice president position, Dr. DeHaven became even more interested in the job this January when he heard the AVMA strategic planning goals discussed during the Association's leadership conference. Those goals, which deal with animal welfare, veterinary workforce, economic viability, veterinary education, and veterinary services, are critically important to the future of veterinary medicine, he said. After receiving his DVM degree from Purdue University in 1975, Dr. DeHaven spent four years as an officer in the Army Veterinary Corps before joining APHIS. Several years later, in 1989, he earned an MBA from Millsaps College in Jackson, Miss. Dr. DeHaven was born in Salt Lake City and raised in Mount Prospect, Ill. He and his wife, Nancy, have a grown daughter and son and are grandparents.