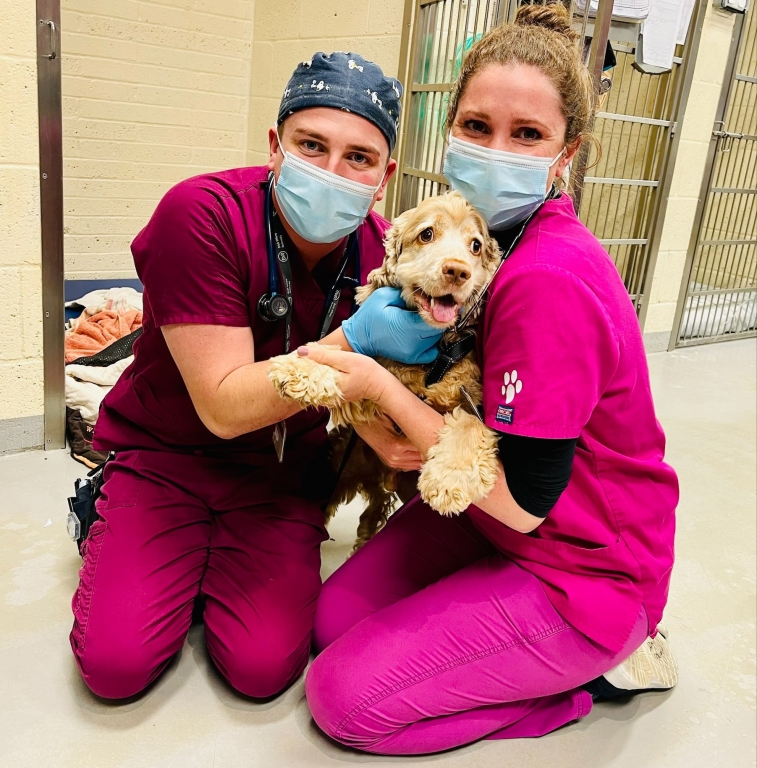 Vets at a renowned Cambridgeshire referral centre have saved the life of a dog with tetanus after establishing a grass seed in its paw as the ‘very uncommon’ cause.

During triage, cardiothoracic surgery nurse Craig Bailey immediately spotted the signs of a potentially-fatal tetanus infection in Oakley and a wound was found on one of his paws, which was thought to be the most likely entry point of the Clostridium tetani bacteria.

He was transferred to the neurology department under the care of intern Daniel Ryan and underwent exploratory surgery on the wound with soft tissue specialist Rachel Hattersley, which revealed the grass seed.

While a grass seed is a common cause of issues for dogs, Daniel said it was very rare for it to lead to tetanus.

Oakley became progressively stiffer and developed aspiration pneumonia, a known complication of tetanus. But he was able to overcome this and was nursed back to health through the combined efforts of the ICU, neurology and physiotherapy teams.

Daniel said: “The seed was trapped in Oakley’s paw, which is a common place to find one. When we see tetanus in referral centres it usually comes from a wound, but it’s very uncommon to see a case of tetanus caused by a grass seed.

“Oakley was off-colour and lame when he presented to us and went for surgery the next day. Rachel placed a gastrotomy feeding tube, central venous catheter and urethral catheter and started him on antibiotics and muscle relaxants.

“Then it is a case of the animal getting worse before they get better. Oakley developed aspiration pneumonia and was oxygen dependent, and we a have high-flow nasal oxygen machine on site for this very purpose.”

Craig added: “In these sorts of cases, the patients rely heavily on nursing intervention. Oakley had one-to-one nursing 24/7 for the whole time he was in ICU, which makes a massive difference. All of the nurses are involved and these patients very quickly become part of the ICU family.

“We also have a physio team who visited him twice a day, which was integral to his recovery. This minimised joint stiffness and reduced the discomfort associated with the increased muscle contractions that come with tetanus, as muscle relaxants can only do so much.

“Dogs are very sensitive to environmental stimulus such as noise and light during their treatment in ICU, so Oakley was kept mildly sedated with a blindfold made from a surgical mask and earplugs. The results really show the benefit of having a specialist nursing team in a referral hospital.”

Oakley was discharged 25 days after first admission and has a very good prognosis, although he will require further rehabilitation and physiotherapy.

“He’s completely back to normal and has made a complete recovery. He’s had some sleep problems and has some night terrors, which is really common, but he’s doing just fine,” added Dan.