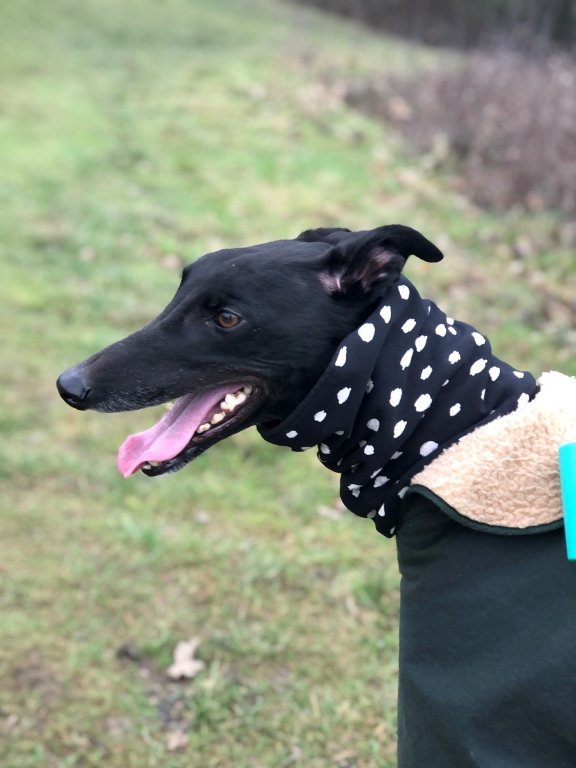 Dog Given Slim Chance Of Survival Beats Odds Thanks To LVS

A former racing greyhound has defied the odds to triumph in the toughest contest of his career.

Four-year-old Dougie, whose racing name was Savana Dougie, was given only a slim chance of survival as he battled a rare complication after undergoing lung surgery.

Dougie dug deep, though, and his remarkable recovery is now being cheered by expert clinicians at London Vet Specialists (LVS) in Belsize Park, and his relieved owner Michael Cohen.

Michael, from Archway, North London, said: “What started out as a bit of a cough quickly became a much bigger and far more serious problem.

“At one stage the vets admitted it was touch and go and that Dougie only had a 30 per cent chance of survival but after ten days in intensive care he was finally allowed to come home.

“Now he’s 99.9 per cent back to normal and is looking forward to a long and happy retirement as a very pampered and precious pet.”

Dougie’s cough turned out to be a chronic abscess in the lung. After treating with antibiotics and medications, the infection in the lung persisted, which meant Dougie required surgery.

The abnormal lung was removed with the aid of a camera and although the operation was straightforward and all went well, his condition quickly deteriorated.

Dr McClaran said: “Greyhounds are particularly susceptible to this disorder which prevents the blood from clotting and makes it extremely difficult to stop any bleeding.

“Dougie needed urgent attention including receiving plasma, blood transfusions and oxygen and was immediately transferred to our emergency and critical care unit.”

The ex-racer then received constant 24-hour care from the ECC team of vets and nurses.

Dr Stewart said: “The first three days were very difficult but thanks to the team work of all the LVS specialists and staff, Dougie started to make a miraculous recovery.

“He was one tough cookie and 24 hours after seven days of intensive care and hospitalisation, he was able to go home and continue his recovery and care with his new family.

“They tended to him for the next few weeks with lots of care and love. Dougie has made steady progress and has healed well and now he can enjoy his well-deserved retirement.”

Owner Michael added: “We’d taken Dougie in as a rescue dog and we hadn’t had him long so this was a very dramatic and traumatic time for me and my partner Ruth.

“He was very sick and it was touch and go for a while but now the vets at LVS are calling him a miracle dog because he somehow managed to pull through.

“When he came home, he’d lost 10 kilograms in weight and was very weak, so weak he needed to be carried everywhere at first, but we were prepared to do whatever it took to keep him going.

“It’s taken a couple of months of total TLC but now Dougie’s one super happy dog and doesn’t need a single thing - he’s got all the love, toys and treats he needs.

“We can’t thank the staff at LVS enough. They were fantastic and really worked a miracle.”

You can track Dougie’s incredible fight for survival, including dramatic photographs, on his very own Instagram account at www.instagram.com/dougieathome.

For more information about London Vet Specialists, which is part of Linnaeus, and the services it offers, visit https://londonvetspecialists.vet/.