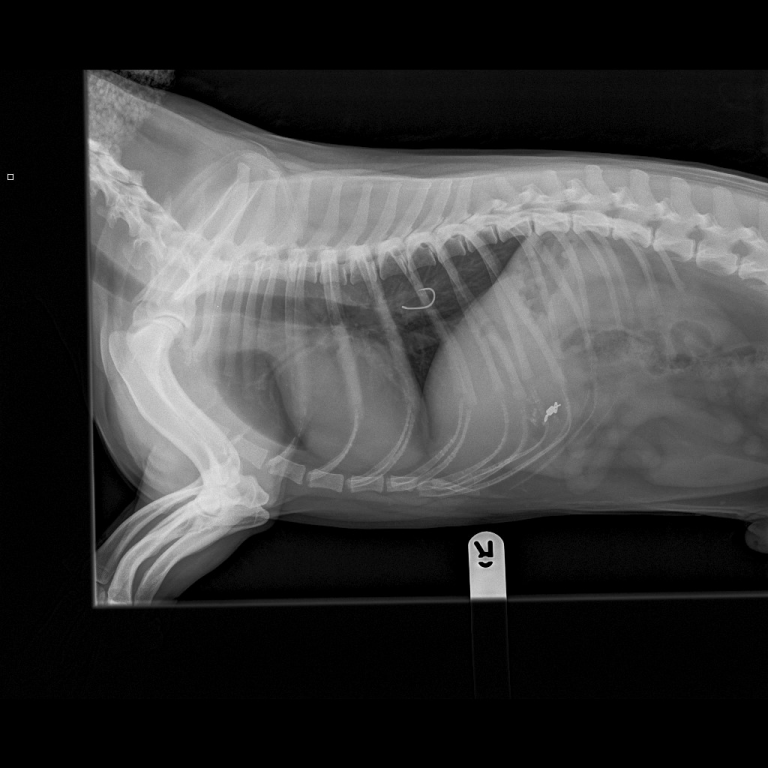 A greedy dog needed emergency treatment at a leading Midlands animal hospital after a fishing trip with his owner went horribly wrong.

The four-year-old Shih-Tzu, called Marley, was referred to the Linnaeus-owned West Midlands Referrals (WMR) near Burton-on-Trent, Staffordshire, after swallowing a fish hook.

The large, double-barbed hook became lodged just below Marley’s heart, while the attached fishing line and weights continued down into the small intestine, creating a dangerous situation for the family pet.

WMR’s Dr Chris Lancelott took charge of the challenging case and explained: “Marley regularly goes fishing with his owner but this time he ate a lump of meat which had been prepared as bait.

“Unfortunately, this meat was already attached to a large, double-barbed fishing hook. The owner managed to cut the line but the hook embedded in the thoracic oesophagus and the remaining line and weights passed into the small intestine pulling on the hook.

“We took X-rays and performed an endoscopy to confirm the position of the hook and weights, and to examine where the hook had penetrated.

“We then used the tools of the endoscope to carefully free the hook and remove it along with the attached line and weights.

“This was a difficult, challenging procedure, especially as we were dealing with a double-barbed hook and it had penetrated deep into the oesophagus, just beyond the heart and heading into the chest.

“We also realised that, if this minimally invasive removal had not been successful, we would have needed to operate to perform a thoracotomy, which is obviously a much more invasive surgical procedure.

“Thankfully, this was not necessary in Marley’s case as the endoscopy went well and he was back to normal after a few days with no ongoing problems.”

Relieved owner Raymond Douglin, from Coventry, said: “It all happened in a flash, as we were rushing to leave before the fishery gates were locked.

“I put the fishing rods down on the floor so I could open the gate and suddenly Marley darted forward and swallowed a chunk of luncheon meat that was on one of the lines as bait.

“I ran over and grabbed Marley and grabbed the line which was going down and down deeper into his throat.

“Fortunately, I had some scissors to cut the line but then I was in a sheer panic as I knew the barbed hooks would rip him apart if I tried to pull the line back out.”

Raymond feared Marley would have to be put to sleep but local vets referred him to the experts at WMR, who saved the day thanks to their technical skills with cutting-edge endoscopic equipment.

He added: “Chris and the team at WMR were absolutely brilliant. We were ecstatic when they said that the procedure had been successful.

“We had been to two other vets and they both told us there was nothing they could do, so we really thought we would have to put Marley to sleep.

“I said I’d do anything to keep him alive and that’s when we were referred to WMR as they had the facilities and expertise.

“It was amazing. After two frantic days of worry and concern, we arrived at WMR and Chris had removed the hook inside 45 minutes.

“We couldn’t believe it. We took the staff flowers and chocolates as a thank-you and a bottle of whisky for Chris. We are so grateful to them. They were brilliant.

“We’re so lucky we’ve still got Marley, He’d been fishing with me plenty of times before and never done anything like this so it was a huge shock. One thing is certain; he won’t be coming with me again!”

Especially as the traumatic event threatened to totally overshadow Raymond’s finest hour as an angler, landing his biggest ever fish – a 40lb sturgeon.

Now, thanks to WMR, he has two incredible stories to tell about his dramatic day out!

WMR, which is based in Barton Under Needwood, Staffordshire, provides a wide range of high standard veterinary services delivered by experienced clinicians and supported by state-of-the-art facilities to facilitate accurate diagnosis and treatment.