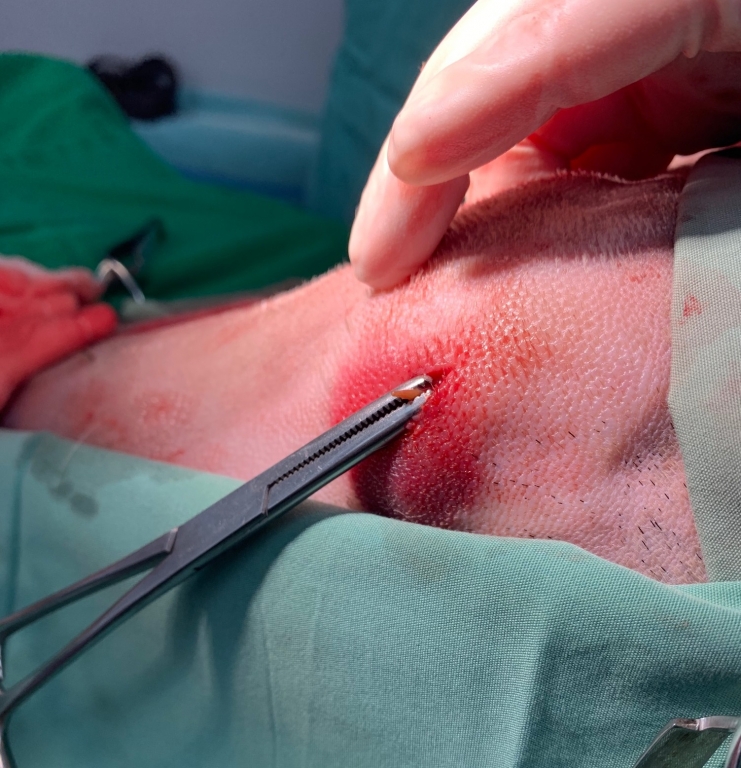 A young dog was rushed to a leading Dublin vet practice after its horrified owner discovered what turned out to be a kebab skewer sticking out of its stomach.

Expert clinicians at Linnaeus-owned My Vet in Firhouse, Dublin, quickly investigated the protrusion with an ultrasound scan confirming it was a sharp kebab stick which had pierced Luna’s liver and become wedged across the whole of her abdomen.

Vet Sarah Martin, who took charge of the case with vet nurse Sarah O’Malley, said: “Luna’s owner said she may have sneakily eaten a chicken kebab on a stick a few days before.

“She’d been vomiting for a couple of days but then her owner noticed the swelling around the left side of her body and brought her into My Vet.

“We performed an exploratory laparotomy to try to locate the skewer and discovered the sharp end had penetrated through the stomach wall, through part of her liver and then pinned her stomach to her body wall.

“These types of incidents can be dangerous, even life-threatening as a skewer can penetrate through any part of intestines or in some extreme cases, can enter the chest cavity.

“When we opened Luna up, the wooden skewer was clearly visible and wedged across her abdominal cavity, stretching across from her stomach to the side of the body wall!

“These cases can often lead to infection outbreak around the abdominal organs however, Luna's body had fortunately formed a seal around the openings, preventing any major infection from spreading.

“Removing the stick was still not straightforward. The tricky part was to cut the skewer in the centre to free up each end and then pull the pointed end through the skin externally. Then we opened her stomach itself to remove the other end.

“All went well, though, and remarkably Luna has made an incredible recovery. She was back eating the next day and, 10 days later, had fully recovered from the surgery and was back causing mischief!”

Relieved owner Aoife says the young pup’s treatment at My Vet was out of this world. She said: “'Luna recovered brilliantly from her surgery at My Vet, having bounced back after two weeks and is now well and truly back to herself.”

Founded in 2005, My Vet is a family practice employing more than 50 staff across its three sites and partnered with Linnaeus earlier this year.