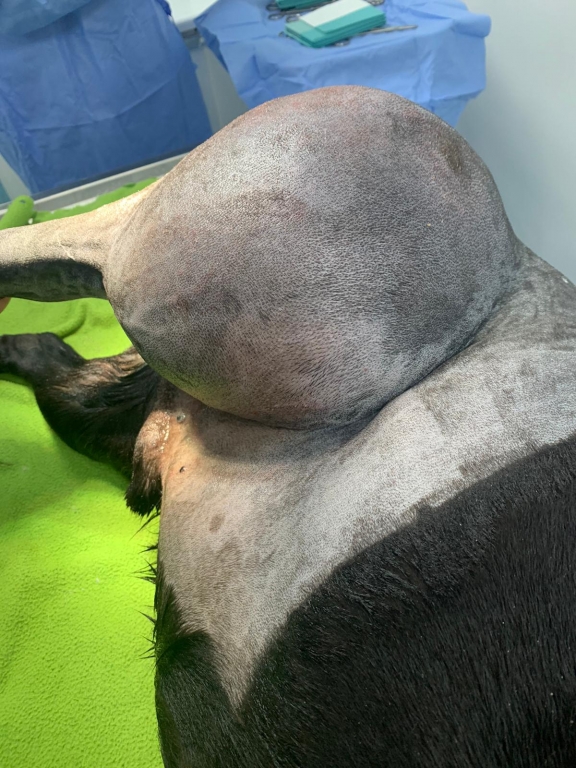 Labrador Bounces Back After Vet’s Largest Ever Lipoma Removal

A nine year old Labrador from Bradford has bounced back following an operation to remove a lump the size of a football from his hip and back leg at White Cross Vets in Eccleshill, part of the IVC Evidensia group.

Bouncer’s owner Zoe McNulty first discovered the lump towards the end of 2019, but it was small and showed no sign of change for months. Then, just one week before the Covid-19 lockdown she noticed it suddenly expanding.

She said: “We were scared as the lump had grown so suddenly, but government guidelines meant unless it was an emergency, we could not go to the vets at that time. They told us to keep monitoring the situation, which we did, and it just kept growing! At first Bouncer showed no signs of distress but when it got bigger, he began struggling to walk. Then on an evening walk he collapsed and we were able to make an emergency appointment at White Cross Vets in Eccleshill for an examination.”

Vet Anita Fox, from White Cross Vets, explained: “We took a biopsy of the lump and prescribed pain killers for Bouncer. Four days later and the results were in – it was good news as it was a benign lipoma.”

A lipoma is a benign tumour of fat seen normally seen in middle-aged to older pets. The collection of fat cells form just under the skin on any part of the body. Lipomas are quite common in dogs, affecting one in 50 dogs every year, but their large size and rapid growth often causes great concern for owners.

The team at White Cross Vets recommended the surgical removal of the lump. Anita explained: “Due to the location of the lipoma we thought it would be a very time intensive operation, taking around three hours. Luckily, we were able to remove the lipoma in one piece, and completed the operation successfully in just one and a half hours. Weighing in at a staggering 3.3kg, it’s the largest lipoma I have ever seen!”

Zoe added: “We were so relieved when the vets called to tell us everything had got to plan. Bouncer is such an adorable dog with such a caring nature. His original owner was unable to look after him so we gave him a new loving home when he was just one year old, and he is a huge part of our family.

“He loves his walks in the forests and beaches and is Bouncer by name and nature! It was so hard to watch the growth getting bigger – especially because the lockdown prevented us from getting medical treatment straight away. We couldn’t believe how quickly he recovered from the operation – within a few hours he was back to his normal bouncy self – just with a very big scar! He’s got a few more of these lumps, which are quite common in Labradors, but hopefully they won’t grow like this one did!”